The price of gold continued its lateral movement last week, but veteran gold traders are used to a plateau after a rally.

But we're seeing a barrage of bullish indicators for gold right now, including a billionaire investing mogul jumping into the space.

After all, the big rally that took gold prices back into bull mode did so convincingly.

Gold is well above its 200-day moving average, which should provide support if current weakness becomes a bit more near-term correction.

But none of the fundamental drivers have seen much change. Trade tariffs are still a major issue, the U.S. government shutdown is still in place, global growth is slowing, and the Fed's become more dovish.

With yet another billionaire throwing his hat into the gold ring, the arguments for owning the ultimate hedge have gotten even stronger.

Add in a mega-merger to form the world's largest gold miner, and you have the makings for more strength in gold.

Let's take a closer look at what's going on, including where I see gold prices heading next…

Why the Price of Gold Won't Stay Flat for Long

The price of gold got to within less than $4 of $1,300 a full seven times in the last few weeks.  But each time, traders seized those highs as an opportunity to sell and take profits.

Once gold prices can close convincingly above $1,300, that could well become a new "floor," with gold then working its way higher.

But by Friday (Jan. 18), optimism continued to grow over prospects that the U.S.-China trade spat was nearing an end.

Stocks rose on more relief rallying during the week too. The combination of these two variables lifted the dollar even further on Friday.

We can see that in the U.S. Dollar Index (DXY) below… 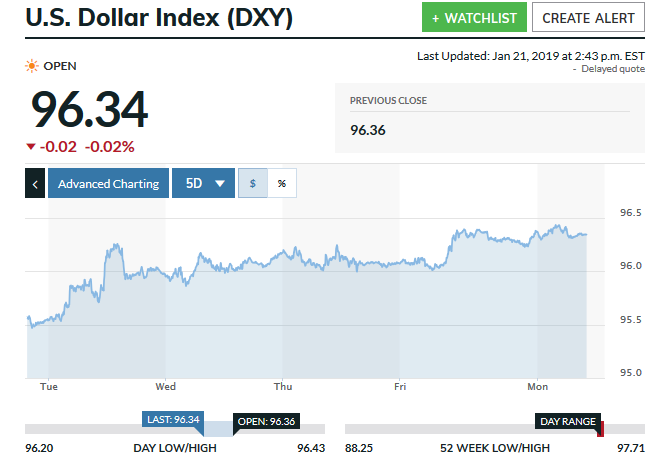 Then on Monday (Jan. 21), a shortened trading day for gold and a holiday for stock markets, gold dipped a bit further even as the DXY held steady around 96.34.

But as I said earlier, we're still in bull mode, and I expect a break above gold's resistance level will send gold prices higher.

And from what I'm seeing in my gold charts, one indicator shows we're poised for a new breakout.