The latest Tesla earnings report is due out on Wednesday, Jan. 30, and it could be a pivotal day for the company. 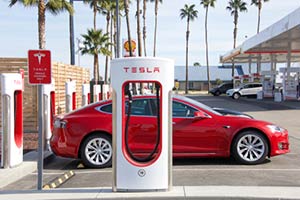 Despite reporting a profit during its Q3 earnings last quarter, the company has taken a series of hits leading up to its Q4 earnings report.

Last week, Tesla Inc. (NASDAQ: TSLA) slashed its earnings forecast for the fourth quarter and announced plans to cut its workforce by roughly 7% and cut car prices by $2,000 to drum up demand.

The news sent the company's stock down over 13% in just one trading session, as investors worried about Tesla's future. Then, RBC Capital downgraded the stock this week, sending shares down another 2%.

That's setting the stage for Q4 earnings. Will Tesla report a second straight quarter of profits, or will weak guidance sink the stock even more?

But this earnings report won't be the bombshell many investors expect it to be.

You see, Tesla is on the verge of a revolutionary transformation - one that could push the company's stock to new highs...

Tesla Auto Is Just the Tip of the Iceberg

In his letter to shareholders earlier this month, Tesla CEO Elon Musk said Tesla faces an uphill battle in making its products accessible to the general market.

"We face an extremely difficult challenge: making our cars, batteries, and solar products cost-competitive with fossil fuels," he wrote. "While we have made great progress, our products are still too expensive for most people."

While Musk's public acknowledgement of Tesla's production woes is important, the real news here comes from his mention of "batteries and solar products."

While Tesla has traditionally framed itself as a competitor to the auto industry, its real market competition is the fossil fuel industry at large.

According to Money Morning Chief Investment Strategist Keith Fitz-Gerald, Tesla's real value isn't as a car company, but as a global energy company.

According to Keith, "The fact that Musk is involved in so many things is precisely the attraction here and why savvy investors would be wise to pay attention. Musk wants to redefine the electric grid and with it, the world's energy supply."

This isn't a new track for Tesla either. It's been slowly building up its role as an energy company for years.

In 2015, Tesla announced the launch of the Tesla Powerwall, a "rechargeable lithium ion battery with liquid thermal control" that can be installed in homes and provide energy for nearly two days during a power outage.

In May 2016, Tesla began accepting preorders for "solar tiles" - solar panels that could be installed as roof tiles on homes.

This was followed by Tesla's acquisition of one of Musk's other ventures, Solar City, an industrial manufacturer that specializes in the production of solar energy devices.

Over the last two years, Tesla has used Solar City's manufacturing base to increase production of the company's solar panels and make large-scale distribution a reality.

The areas, staffed by Tesla employees, will demonstrate the daily capabilities of Tesla's solar panels and the Powerwall to prospective customers.

In other words, Tesla's real profit potential is as a one-stop shop for energy, not as a car seller. You could power your home with Tesla's solar shingles, store the energy in your Tesla home battery, and charge your vehicle with the battery. Consumers could completely disconnect from the fossil fuel industry and local power companies.

However, the biggest development in Tesla's quest to provide renewable energy solutions on an industrial scale came just earlier this month...

Money Morning staff, I expect better from you. Solar panels and solar tiles are commodity products and to date since Musk's announcement precisely six houses have been fitted with the super expensive tiles. The preorders are just another way of Musk milking gullible people. The Riverside factory in New York is all but derelict. They are not and probably never will be a game changer. The Silevo brand that Musk purchased together with the Solar City bailout has disappeared, together with Solar City itself. The deal with Home Depot was ended months ago. The Shanghai factory is a rented plot of land on which they have moved some dirt. There has been no explanation as to how they are going to pay for this new factory, nor the new models, nor the expansion of the charger network, nor the service centers that they need urgently. They are laying off staff and Musk just gave a profit warning and have a huge note to pay off in a couple of weeks as well as dropping prices on their new model, increasing supercharger fees and ending their referral program. They are once again, probably close to death as stated by Musk a few months ago and yet you tell people to buy stock? Your information is usually current and relatively free of pump but this is a very shoddy article and makes me wonder if the person writing it is not getting something for their trouble of attempting to pump the stock?