The price of gold blasted higher on Friday, testing the $1,300 level and adding new momentum to the bullish gold sentiment. 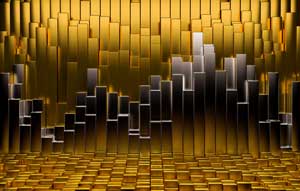 Still, that psychologically significant price remains elusive. But in my view, that’s not likely to be the case for long.

You see, the U.S. dollar put on a brief relief rally last week. And as the market looks forward to this week’s Fed meeting, it’s starting to price in no rate hike.

That’s contributing to the weaker dollar.

But whether the Fed puts on either a hawkish or dovish tone this week, gold prices are positioned to rise. I’ll tell you exactly why below.

What Inspired the Big Rally in Gold Prices

Gold trading succumbed to ongoing dollar strength and more trader apathy through most of last week.

The major U.S. stock indexes struggled through a choppy week until Friday (Jan. 25). Earnings were coming in quite strong, beating estimates by about 2.4%, with 69% of companies managing to beat bottom-line estimates.

That is, until Friday. All the gold price action, it seems, was concentrated on that day. Here’s what happened…

Traders began favoring other major currencies and rotating back into stocks. The DXY peaked Thursday (Jan. 24) afternoon at 96.64 and then dialed back to 96.45. But just after 8 a.m. on Friday, the DXY sold off dramatically down to 95.9 by noon.

Take a look at the dramatic move here… 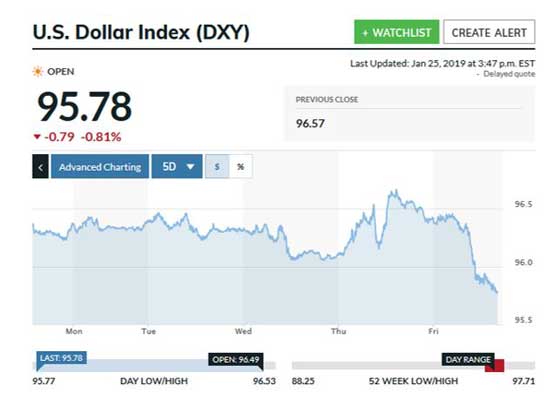 That sell-off powered gold prices higher, despite a surge in the major U.S. indexes.

Once it reached those levels, the metal traded mainly between $1,296 and $1,298 before heading into the weekend.

As I said earlier, I think gold prices will break through the $1,300 level soon enough. But that’s not all. Here’s my latest gold price prediction…

Where the Price of Gold Will Land Next

Should I buy physical gold or gold stock? If I should buy a gold stock,which one? Thank you