The financial press is rife with warnings that the yield curve inversion is about to bring on a recession.

That's only partially true, at best. 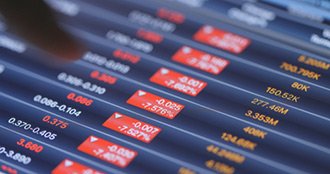 It is true that when short-term interest rates rise above long-term rates - called a yield curve inversion - that a recession is likely to follow.

But the same history shows us that it takes more than a year before it actually happens. That means there is still plenty of opportunity for smart investors to bank some big profits while everyone else panics.

Plus, people who actually know what they're talking about aren't even sure this is a true inversion...

Did the Yield Curve Invert?

Before we even get into what to do about an inverted yield curve, we have to establish that the curve is actually inverted at all. This week, the chicken littles in the media fell all over themselves to report that the curve inverted. But did it?

It is true that the three-month Treasury rate moved up to 2.42%, which is higher than the 10-year rate at 2.41%. It was actually a bit more pronounced earlier in the week, so right away we can see that this was more of a short-term anomaly than a signal of bad things to come.

Take a look at this chart, which shows the very short end of the curve slightly above the rest. For the most part, the curve is not yet inverted. 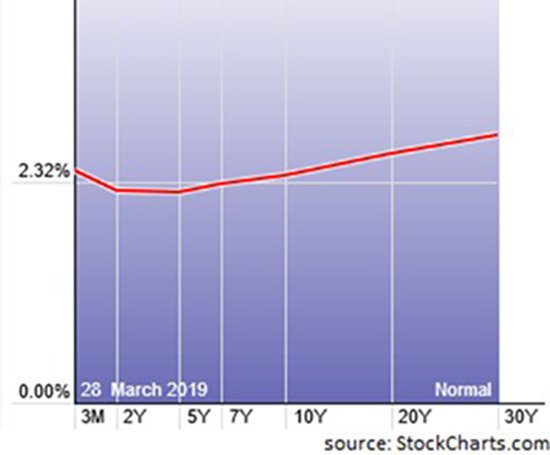 This is why smart investors do their own homework and take guidance from respected experts.

And this is what the experts are saying...

The Fed Is the Wild Card

Remember who, or what, controls each part of the yield curve. The short end is highly dependent on the U.S. Federal Reserve and whatever policy it chooses to follow. Fed Chair Jerome Powell has already said that the Fed will not pursue a rate hike strategy this year, so whatever is happening to the yield curve now does not have real staying power.

In fact, traders believe him. Federal funds futures trading on the Chicago Mercantile Exchange continue to show zero chance of a Fed rate hike in 2019, according to experts who crunch the odds.

Making it even more interesting is the fact that the President's nominee for a Fed post, Stephen Moore, has already called for the Fed to slash short-term rates.

On the other side, the long end of the curve is controlled by the market, inflation, and growth prospects. Fed policy only has a tangential effect on where long-term rates go, and right now, that portion of the yield curve looks fairly normal.

To be sure, fairly normal is not necessarily bullish for the economy. Rates peaked last November and have been heading lower ever since. That's not a great sign for economic growth, but by itself, it is not a harbinger for a recession.

That means investors have plenty of time to cash in before a recession hits and sends stocks tumbling.

How to Profit Before the Recession

Very misleading article. They want you to be optimistic about the near term drop in the stock market so they can sell their positions while prices are still favorable. The statement that you have a lot of time to make money before the crash is like playing chicken with your money. Remember, there’s always a greater fool until one day there isn’t and the market crashes. On that day, you’re the fool.

Thanks for your perspective, Joe.

Your points are well taken but respectfully I'd like to push back a bit. There is no need to play "chicken with your money" if you're using appropriate risk management and position sizing – something we encourage as a matter of standard practice for every investor at all times and as part of every service we offer.