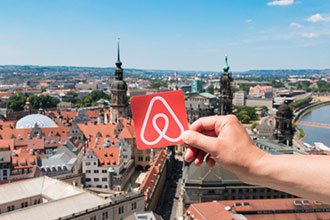 The Airbnb IPO is a promising tech "unicorn" expected to go public in 2020. But that doesn't mean Airbnb stock should be an immediate buy for retail investors…

Now, the company does have great potential. It certainly has a lot more going for it than the other dime-a-dozen Silicon Valley IPOs we've seen in 2019.

According to TechCrunch, Airbnb saw more than $1 billion in revenue in Q3 2018. And 2018 was its second year in a row in which the company reported it was profitable on the EBITDA metric.

Plus, Reuters says Airbnb’s Q1 2019 financials showed the company has increased its booking value by 31% to $9.4 billion in comparison to last year. Beyond that, it has a whopping $3.5 billion cash on hand.

Airbnb operates in 191 countries worldwide with 4 million unique rental listings. Plus, Airbnb continues to expand in some of the world’s biggest cities. In a 2018 memo from the company, it also reported stays in England, Birmingham, and Mexico City had all skyrocketed 70% to 79%, while stays in Beijing increased by 90%.

And that success continued well into 2019. In fact, Airbnb has already had 91 million nights booked this year so far.

So, whether you're using the company's website or mobile app, you'll see listings varying from apartments, homes, large bamboo tents, boathouses, castles, and… well, you get the picture.

While that all sounds pretty amazing, retail investors should remain skeptical of the Airbnb stock.

But before we get to our full analysis of Airbnb stock, here's the story of the company…

Back in 2007, two roommates, Brian Chesky and Joe Gebbia, were struggling to make their month's rent. But with an upcoming conference in the San Francisco area, they saw hotels were getting booked left and right.

Seizing the opportunity, they posted an advertisement offering an air mattress and breakfast in their living room. Within the next year, they had started "AirBed & Breakfast," a name that was eventually shortened to Airbnb.

Eleven years on, the two roommates (now CEO and chief product officer) transformed that month's rent into a company valued at $31 billion. In that time, Airbnb has hosted almost 500 million overnight stays. Beyond that, it's now averaging 2 million stays per night.

So, with reports of earnings growth, a rapidly growing user base, and an ever-growing list of home-sharing locations, Airbnb is one of the few tech "unicorns" turning a profit.

Here's how it's managed to remain profitable…

Airbnb is essentially the intermediary website/app between travelers and hosts. You can view rental spaces, communicate with hosts, pay for your stay, and even submit reviews.

Each listing is posted by a rental property owner. This means if you had an apartment in Chicago that you only stay in several months out the year, you could put it on Airbnb as a rental property for travelers to stay.

As a host, you're charged a 3% to 5% fee from Airbnb for listing your space and processing transactions (and certain taxes depending on location), while guests that stay in it are charged commissions ranging from 6% to 12%.

But since Airbnb is a private company, many of the financial details aren't available. However, between 2014 and 2015, revenue had reportedly grown 113%.

This is a pretty big deal when you consider the other big tech IPOs in 2019 that are operating at losses ranging from $100 million (Pinterest) all the way to a little over $900 million (Lyft).

However, even though the Airbnb stock may sound tempting at the company's IPO, you might want to hold out on immediately investing in it when it officially goes public.

Airbnb Is Susceptible to Changing Laws and Regulations

While Airbnb is undeniably a dominant success, not everyone is happy with the home-sharing services.

So, once the Airbnb stock is officially announced, many of the issues will become big talking points for analysts.

However, there's also big competition looming on the horizon…

Since its conception, Airbnb has been considered a direct competitor to the hotel industry. In fact, Airbnb has over 6 million global listings, offering travelers more places to stay than the top five hotels worldwide.

Beyond that, the company also recently signed a deal to acquire HotelTonight, an app specializing in booking boutique hotels for travelers. But big companies like Expedia (HomeAway), VRBO, Booking Holdings, Tripping, and Trivago all specialize in bookings and travel rentals as well.

This means a few things:

In comparison, Airbnb is primarily a home-sharing app with a little over 15,000 listings for boutique hotels.

And it's still in competition with major hotels like Marriott (NASDAQ: MAR).

So, while Airbnb is ramping up efforts to compete with the OTA heavyweights, those same companies have already shifted their services to match.

Even with all the promise the Airbnb IPO has, it’ll be a riskier buy for retail investors right out of the gate.

Unfortunately – outside of rare situations like Alibaba Group Holding Ltd. (NYSE: BABA) – IPOs typically only line the pockets of big banks and existing wealthy investors. These "institutional investors" have access to IPOs at the original offer prices while also having the means to buy millions of dollars' worth of shares.

Just look at how Lyft's IPO launch went. Banks valued the stock between $62 to $68. But with massive oversubscriptions, banks and wealthy investors paid $72 per share.

Once shares were available to everyone (at market open), they were valued at roughly $88. Within the next day, the price fell to $71. Now, Lyft is trading at $43.60 per share.

This means anyone who purchased Lyft stock at $88 is sitting at a 50.5% loss, while the big banks had only lost 1% at the IPO.

And the same thing happened with Uber Technologies Inc. (NYSE: UBER) – which racked up another $5.2 billion in losses in the first half of 20019, according to TechCrunch.

This is very common for startup "unicorns" announcing their tech IPOs. So, Money Morning does not recommend investing in the Airbnb IPO right away.

It may be a good investment eventually, but we suggest waiting two or three quarters for the potential volatility to settle. Then, if the financials look good, you can invest.

In the meantime, Money Morning Defense and Tech Specialist Michael A. Robinson has four bigger plays investors can make…

You Stand to Make Big Profits with These Four Investments