The mysterious Palantir IPO is expected sometime this year. And it's likely going to be one of the most valuable public offerings of 2019.

While it will get plenty of attention, we don't advise investing in the Palantir IPO.

Palantir is a data mining company, but much of its value is shrouded in mystery. And while the company shows promise, IPOs can be risky investments for retail investors.

When it comes to IPOs, institutional investors are the ones who get in first. This means when retail investors can finally buy in after shares start trading, they're often buying a stock that is significantly overvalued. And since Palantir's valuations are spotty at best, this means it has the potential to be even more volatile. 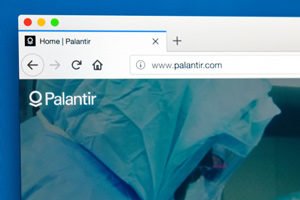 While we recommend not investing in the Palantir IPO, we have another way for retail investors to profit.

In fact, we have a backdoor play that will capitalize on the interest and markets of Palantir without worrying about the volatility.

Palantir Is All About Data

It struggled at first to find interested investors. But eventually, it received $2 million from the CIA's venture capital arm, In-Q-Tel.

Several years later, Palantir played an instrumental role in foiling a cyber-espionage plan by China. Using the networks "Shadow Network" and "GhostNet," China had been spying on over 100 different countries.

And according to a TechCrunch leak, Palantir's clientele consists mostly of U.S. government agencies, some of which are the Air Force, West Point, the Marines, SOCOM, the NSA, the FBI, the CIA, the CDC, and the Department of Homeland Security.

In 2016, Palantir signed a $222 million contract with SOCOM in order to help the organization gather intelligence. And while that sounds broad, Palantir's services all revolve around analyzing and mining data for intelligence.

The easiest way to explain data mining is by looking at Amazon.com Inc. (NASDAQ: AMZN). Let's say you're into fishing and buy a fishing rod off Amazon. Then, you go back and you buy a bait and tackle box. A couple of weeks later, you decide to get fly-fishing boots as well.

After all of these purchases, Amazon's machine learning AI will start to pick up on your spending habits and preferences. It'll use this information to then "recommend" other products you may like based on your behavioral patterns and purchases.

And that's just one form of data mining.

The data mining industry is often referred to as "Big Data." And the industry is anticipated to see exponential growth over the next few years. That's despite growing concerns involving privacy and the misuse of data mining technology.

Here's Why Palantir Is Not a Great Investment Now