There's a catch to America's lowest unemployment rate in 50 years: It happens to be a trillion-dollar industry. It's the Baby Boomer retirement wave.

While that's great news and a sign the economy is doing as well as ever, some economists quickly pointed out it was too good to be true. 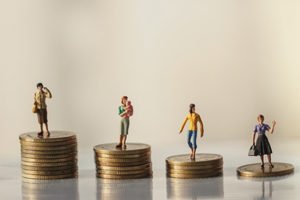 According to MarketWatch, unemployment fell simply because the labor force shrunk by a half-million people, and it's been shrinking in greater proportion every month since January. There are fewer Americans participating in the labor force, so they are not included in the unemployment calculation.

The unemployment rate was 3.8% in March, and the 0.2% difference, it turns out, represents Americans who were looking for jobs but then chose to retire instead. Here's a look at the labor force over the last few months, the percentage of people between ages 16 and 64 who are employed or seeking employment. You can see the participation rate has been falling steadily. 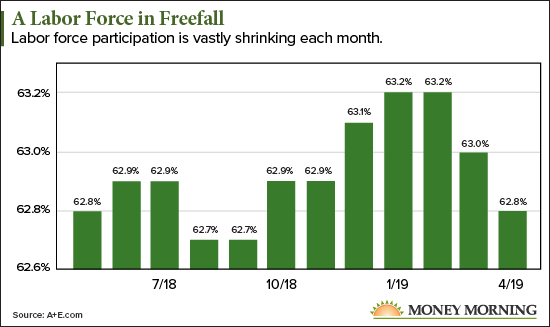 But there's a bigger reason behind this, and it could make you rich.

The U.S. Census Bureau projects that by 2030, all Americans born between 1946 and 1964 will be older than 65. The Boomers will have all reached retirement age.

Kiplinger says it's the first time in human history that those over 65 will outnumber children younger than five. The total number of Boomers amounts 74.9 million. It's around double the size of the Silent Generation before it, which was about 28.32 million.

In other words, Baby Boomer retirement is the reason for our dwindling labor force and lower unemployment numbers. And it's also going to put a huge strain on different retirement industries.

So, in a way, celebrating lower unemployment was a false start - we didn't do anything but age. No sweeping public policy move or sudden revitalization of the working class is responsible. Only time.

But what if there was a way to profit from the mere passage of time?

We've uncovered a stock that makes this more than possible - but you should first know the extent of the opportunity unlocked by this retirement boom. There are actually several profitable investment strategies to take with a catalyst of this size, because it affects so many people in different areas.

This Is Insidious: Every single day, thousands of "reHIREes" are reentering the workforce. Click here to find out how you can avoid the ReHIREment plague.

Think about it: 29% of the workforce will disappear over the next couple of decades. But these people aren't just leaving the workforce; they are going into retirement. We will see a surge in healthcare and residential expenses attributable to a whole 21% of the American population.

And according to Money.com, the average cost to cover a senior's healthcare from retirement to death is $280,000. When you multiply that by 74.9 million, you're looking at a market worth over $20.9 trillion.

But you'll only get a slice of that if you invest in a smart and timely fashion. There are a range of investments to consider if you want to take full advantage of the retirement boom. And smart investors have already jumped on a few of them.

The first one is a mutual fund popular with the aging population - though, it should be popular with anyone looking for a comfortable future retirement. After that, we'll show you a stock that's seeing more than a 120% increase in revenue year over year (YoY).

The fund is well diversified across many blue-chip stocks. These include stocks like McDonald's Corp. (NYSE: MCD), Coca-Cola Co. (NYSE: KO), Microsoft Corp. (NASDAQ: MSFT), and Johnson & Johnson (NYSE: JNJ). But those are just some of the top 10 holdings, which make up 32.4% of the assets in the portfolio totaling $35.85 billion.

Its most heavily invested sector is healthcare, at 17.3%, which is important for consistent, long-term growth. Healthcare expenditures accounted for just 12.2% of gross national product (GNP) in 1990, but they could grow as high as 43.7% by 2030, according to HealthAffairs.org.

Investors could look to the Vanguard Health Care ETF (NYSE Arca: VHT) as an alternative, which invests exclusively in healthcare stocks. But the assets there currently total only $10.7 billion, and the fund is $167.58 per share. At $28.13, VDIGX is a much more accessible, diversified option that maximizes dividends and profit potential.

Vanguard Dividend Growth's share price has grown 157% over the last 10 years, from $8.98 to $28.13. Its turnover rate is about 23%, a solid compromise between active and passive investing for a portfolio aiming to maximize your long-term growth.

VDIGX is a fund many seniors will want to invest in to cushion their retirement, so those expecting to retire on the coattails of the great Boomer retirement will make out well if they invest now.

A real estate investment trust (REIT) works kind of like a stock. A company that owns property can pay out some of its income to shareholders, similar to a dividend. What makes Ventas Inc. (NYSE: VTR) profitable is this REIT owns a total of 787 senior housing communities.

Morningstar projects 40% of individuals will enter a nursing home in their lifetime. And according to LongTermCare.gov, the average cost of long-term senior care is around $4,000 to $7,000 per month.

Forty percent of 74.9 million is 29.9 million. So long-term care alone adds at least $1.4 trillion per year to the Baby Boomer market. Demand for these properties will climb at an unprecedented rate over the next couple of decades.

Though Ventas has experienced oversupply for senior housing in the last few years, Senior Housing News reports that demand is expected to rise to 3.2 million units by 2040.

Today, VTR sells for about at $61.29 per share. It will likely be a whole lot more after the next wave of retirement hits. But its growth won't match this next investment, a healthcare stock that has a near-perfect score on our Money Morning Stock VQScore™ system.

It logs a 4.15, meaning it's an undervalued stock and its financials have it poised for a breakout in price.

The Best Way to Invest in Baby Boomer Retirement