Beyond Meat Inc. (NASDAQ: BYND) soared over 227% higher since it went public on May 28. That's because its meatless burgers and sausage products are wildly popular. Now it's getting a new rival.

And instead of telling you which company is going to win, we're telling you there are plenty of reasons to own both companies. 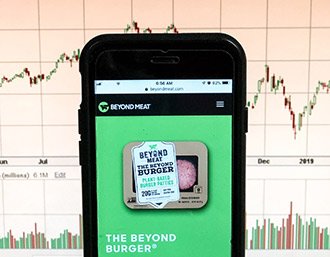 Beyond Meat's explosive growth is largely due to the market's interest in plant-based meat. But it's also because of the way it markets itself to different demographics.

The company is all about inclusivity regardless of your diet of choice. In fact, it doesn't say people should stop eating meat. It simply challenges our idea of what we define as meat.

Plus, it helps that Americans have become more environmentally conscious. A Yale University study that found 69% of Americans are worried about climate change, and meat production takes a toll on the environment.

Producing meat requires over 100 million pounds of fertilizer, pesticides, fuel, and water. This creates 10 to 40 times as much nitrous oxide and other greenhouse gases as the production of vegetables and grains does.

Beyond Meat's success now has other companies wanting a piece of the pie. It's a market that MarketWatch says will be worth $140 billion within the next 10 years alone. Firms like Tyson Foods Inc. (NYSE: SN) and Nestle (OTCMKTS: NSRGY) are gearing up to release their own plant-based products in the fall.

Plus, Beyond Meat's biggest competitor, Impossible Foods, is ramping up its product offerings.

But there's another company joining the fray that we think is a better play, and it could be the perfect complement to Beyond Meat in your portfolio.

This company has been around for almost 40 years. Plus, it's plenty profitable. In fact, it's already made $678.3 million in net profit this year. So it has the cash to reward its investors with a nice 3.20% dividend.

And with its latest plant-based meat acquisition, its profits could soar even higher...

Check out Beyond Meat's latest rival - and why this company is a buy - below.

This Alternative Meat Stock Is a Great Buy Right Now