Can you think of a sector that has been beaten up more by the media than the retailers? Seriously, every time I hear the retail sector mentioned, it's in a very poor light.

Truth be told, the sector's poor reputation is earned. Year to date, the retail ETF has earned around 4% compared to the broader market S&P 500 Index, which has grown by almost 20%. 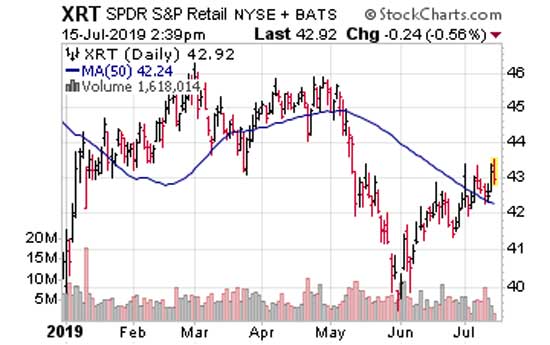 So, I've been talking about how this is a stock picker's market. Want proof?

I talk about my proprietary Best in Breed ranking system often. This system has scored the retail ETF as a sell for more than a year, which has been the right move, as the shares have lost 14%. While the XRT has been a great short, it's also a great example of how it's possible to make money as long as you've got the right tools to pick the stocks correctly every time.

Looking at the retail sector with the Best in Breed system right now reveals a number of companies that are among the top-ranked as we head into the middle of July.

Let's take a look at the two companies in the retail sector that are on my bullish radar...