"There is nothing new under the sun," Ecclesiastes wrote. For the most part, the pseudonymous biblical poet was right on the money.

The credit market, for instance, has existed in one form or another since 3,000 BCE or thereabouts - around 5,000 years.

At the dawn of human civilization, the Mesopotamian economy featured interest rates as high as 20%. And by the time Cyrus II of Persia ("Cyrus the Great" to his friends) conquered Babylon in the sixth century BCE, creditors could often reap a positively mouthwatering 40%.

Unfortunately (and with apologies to Ecclesiastes), there is something very new and very dangerous under the sun these days.

A frenzy of capital destruction - the end result is functionally no different than gathering up all your money, dousing it with gasoline, and setting it alight.

It's unprecedented; it has never happened before, in all of the five millennia that tribal chieftains, warlords, monarchies, principalities, Westphalian nation-states, and multinational corporations have been buying and selling debt.

If that sounds unnatural... perverse.... even insane... well, that's because it is. And not much good can come out of it.

As dangerous as it is, there is a way forward through it. We don't have to take what's coming lying down...

Crises Start in the Bond Market... They Never Stay There

The U.S. Treasury's "best lookin' horse in the glue factory" 30-year is falling by the second. On Tuesday afternoon, it was at 1.925%. It will likely be lower by the time you read this on Friday morning.

So Treasuries are not among the eye-popping 44% of sovereign debt on Earth that's "producing" negative yields.

I'll say that again: 44%. The overall bond market, government and private, is now telling us that half of the world's bonds yield less than zero when adjusted for inflation.

We are now in uncharted waters - never a good time - and something big and unspeakably horrible is circling the boat. 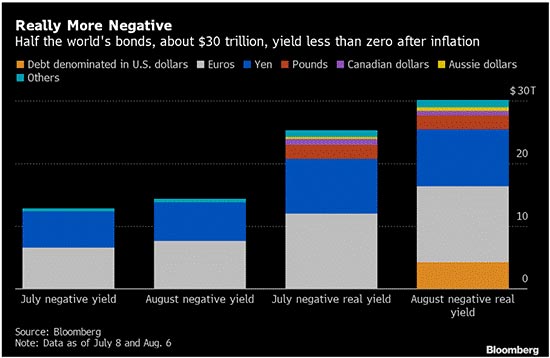 Unfortunately, the credit market - and a world of negative yields - is more than just a big, unknowable abstraction.

It has very real consequences for everyone.

Or, stated more bluntly, a negative-yielding bond is a sexier way of avoiding what it really is: a defaulting bond.

That's right. Over 44% of the nations around the world are constructively defaulting on their debt; buyers of their bonds are purchasing an instrument that destroys capital, that loses money, the moment they buy it.

If that sounds, as I suggested, unnatural, perverse, and insane, it's because it is. How long do you think that's gonna fly?

What I Saw on My European Summer Vacation

In Denmark, Belgium, and the Netherlands, you can actually get a negative mortgage. I saw them there myself. Certain banks, after some absolutely surreal legal arm-twisting, must pay you 0.5% to take out a loan!

In Switzerland, checking accounts offer a -0.75% return - which means you pay banks almost 1% a year to risk your cash. I saw those as well. 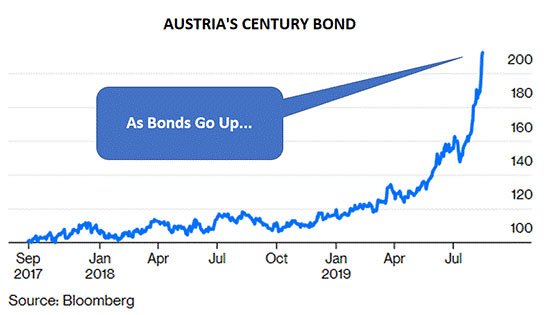 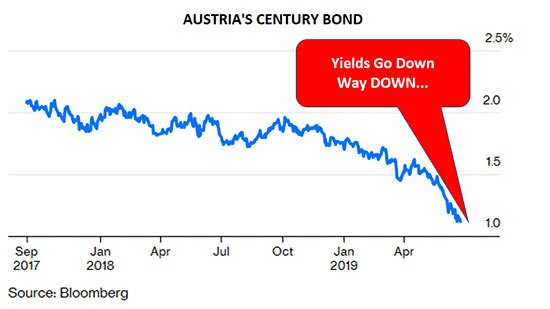 Madness! Make no mistake: A 100-year bond is nothing less than the last refuge of a doomed scoundrel cornered by the sheriff and his hounds.

And yet... the idea has caught on. Belgium and Ireland have issued private "century" bonds. Poland and perennial basket case Italy have flirted with 50-year bonds.

Germany and France have vehemently disavowed such long-duration, fantasy bonds... at least in public.

And, sure enough, right here in the United States, the debt desperados of the Treasury Department - leveraged to the gills and in default on $22 trillion in debt - are tossing around the idea of 50- and 100-year bonds as well.

It's painfully clear that sweaty-palmed, wide-eyed desperation is now the baseline norm in our bond market. It's not unlike the stern of the Titanic, lurching upward one last time - packed with desperate, doomed survivors - before inexorably sinking to the ocean floor.

And if you're thinking, "Well, of course, governments do nothing but tax, borrow, spend, repeat. Private enterprise and private citizens are far more responsible; they have to live in the real world," think again.

Because corporate paper and mortgages are getting just as bad...

With yields this low, investors have no choice but to go further out on the risk branch to seek yield in increasingly junky credit; they have to swing at bad pitches. Yes, over 60% of the U.S. corporate bond market is effectively that: junk with zero to little yield for massive risk. 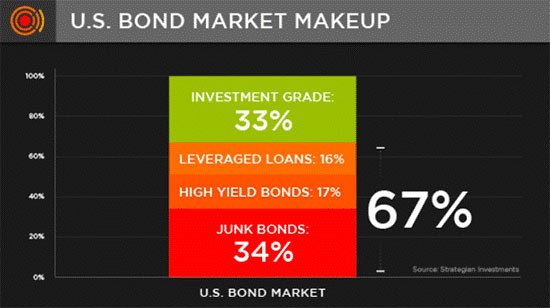 Meanwhile, real estate brokers - who have all the macro savvy of a rotting tree stump - will tell you to buy more homes (at record-high prices) because, "Whoo-hoo, mortgage rates have never been so low!"

But you know better. Think about it: Sure, you can save another 10% on mortgage prices today... but before your mortgage is paid, the value of your home has dropped more than 30% because, wouldn't you know it, housing demand has tanked alongside everything else trapped in a recessionary cycle.

Low rates vs. plunging home values. Not much of a smart arbitrage for the future, eh?

For now, however, in the "good times," no one wants to see this. After all, if it hasn't rained yesterday or today, it can't rain tomorrow, right?

But why will assets like bonds and real estate fall rather than rise down the road - when the rain comes?

What Makes the Bubble Pop - and What Happens When It Does

Eventually, and inevitably, buyers will no longer want bonds that yield nothing. Maybe some junior assistant deputy finance minister somewhere will float the idea of a 200-year bond - who knows? But it won't yield enough; you can't defy economic gravity forever.

The selling will come.

Like sovereign bonds (now at record highs), real estate and other debt-held assets will fall in price like rocks when bond markets sell off and make yields (and interest rates) spike.

It's been the death knell to every debt bubble in the long, long history of markets.

Once In a Lifetime Summit: Cannabis IPO Expert Danny Brody has turned little-known startups into booming $1.6 billion businesses. Here's how you can make YOUR fortune on today's cannabis underdogs. Click here to check it out...

Bonds will fall under their own grotesquely unprecedented weight. Bonds have never risen this high. Ever. And what goes up eventually comes down. Market forces are a lot like physics: Don't fight 'em.

Then, once sovereign debt is no longer sustained by faith in central bank (fantasy) money-printing, tapped-out pension funds, and desperate investors (whose wages haven't budged since 2008), demand for those bonds will fall in the meltdown in price, faith, and trust that follows every melt-up.

As for U.S. government bonds, the only way to sustain them will be more money-printing from the Fed. That will dilute the dollar even further, which will be a huge plus for people who own physical gold, or a gold exchange-traded fund like SPDR Gold ETF (NYSEArca: GLD) or Sprott Physical Gold Trust ETF (NYSEArca: PHYS).

Eventually, even the paltry yield offered by U.S. Treasuries (our 10-year is actually in negative territory right now, when adjusted for inflation) will fail to attract interest from other broke nations or private buyers - even if the United States is the last country to go under in the global meltdown.

Here's What to Do Now

Ultimately, the yield deflation we're seeing will morph into an inflationary nightmare as yields shoot to the moon. Deflation, by the way, always precedes inflation.

So, rather than relitigate the age-old "inflation vs. deflation" argument, prepare yourself for both.

Make sure you have at least a 10% allocation in gold, be it the physical metal or one of the exchange-traded funds I've mentioned. Precious metals can be volatile, sure, but the volatility there is nothing compared to what's coming to stocks and bonds.

And, per my Critical Signals Report "Storm Tracker" tool, I'm recommending a 45% allocation in cash. It's safe, for now, to leave the rest in the market to try and capture the undeniable upside that more Fed easing will generate before this situation blows up in their faces.

My Critical Signals Report readers get full access to all my updates, as well as regular Storm Tracker readings. There's simply no better way to protect yourself and your hard-earned money right now. You can click right here to subscribe automatically, absolutely free of charge, for life.