The price of gold was red-hot this summer, with 22% gains in just three months. And while the gold price has since pulled back about 4%, it's looking especially resilient in the face of a robust dollar.

In fact, the U.S. dollar index is at two-year highs, while gold prices have regained six-year highs. 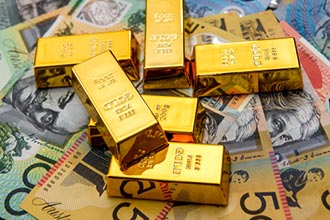 There's no doubt that both can rise together for an extended period. But a stronger dollar weighs on U.S. exports and debtors, so I expect the greenback to be "managed" lower soon to boost American competitiveness.

And when that kicks into high gear, look out for the next gold price jump.

While the U.S. dollar index may be at its highest since May 2017, there's another dollar measure worth watching.

New to Money Morning? Click here to find out what we have to offer you...

With the Fed lowering rates in a supposedly healthy economy, my view is that most strength in the dollar has been a result of safe-haven buying.

As the vast majority of central banks around the world continue with aggressive quantitative easing and some persist with negative rates, most currencies keep losing ground.

So it's no wonder that gold has recently set record all-time highs in as many as 73 currencies. At gold's early September peak of $1,560, it was setting records in the Canadian dollar, the euro, the British pound, the Japanese yen, and the Australian dollar.

The only major currency to still resist is the U.S. dollar. But in my view, that's only a matter of time.

Here's one of the best signs lately that gold's just started a new bull market and has way higher to go.

Russian mining tycoon Suleyman Kerimov saw his net worth jump by $1 billion this year, according to the Bloomberg Billionaires Index. Kerimov's family controls 78.6% of Polyus, Russia's largest gold producer. And with Polyus sales up 20% by volume over Q1, that means a much fatter bottom line.

At the same time, Egypt's richest citizen, Naguib Sawiris, enjoyed an $800 million boost to his net worth. His stakes in gold mines have blossomed, and he told Bloomberg he has his eye on $1,800 gold.

Last month, I said how central banks have been buying gold hand over fist.

Well, that's not changed one bit. It's now been 10 months in a row that the People's Bank of China has added to its gold reserves. September saw a 5.9-ton inflow, making for 100 tons of added gold since December 2018.

Some view this as looking to stabilize the yuan, especially since China is still well below average in terms of gold reserves versus currency reserves for a major power.

But it's not just central banks that are buying aggressively.

According to the World Gold Council, gold-backed ETFs enjoyed a lofty September, with $3.9 billion of net inflows globally. That was an additional 75.2 metric tons of gold, propelling the total to 2,808 metric tons, to reach the highest levels ever.

With falling interest rates, weakening currencies, Brexit, impeachment talk, trade wars, and ongoing geopolitical risks, investors are piling into gold. And these ETF stats are a clear indication of this happening.

Now, here are some of the numbers to back this up.

Where the Gold Price Is Headed 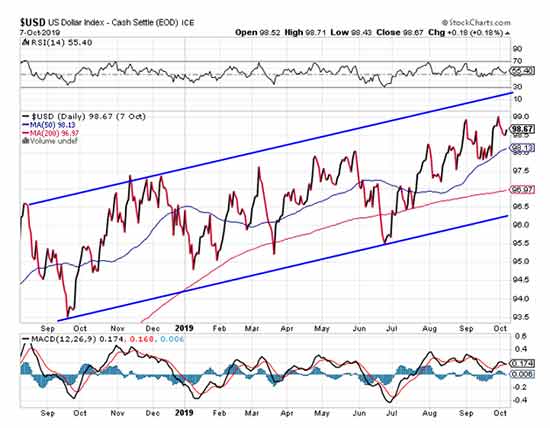 It continues to look bullish as it trades above both the 50-day and 200-day moving averages.

This could continue for some time. But as long as gold continues to shine, gold bulls don't care.

The price of gold saw a pullback to $1,475 that was short-lived. That was the level I said to watch in my September update, and here we are: 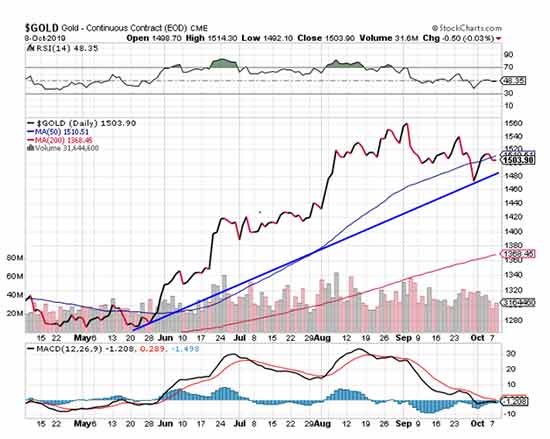 Right now, gold has returned to near its 50-day moving average level. It's still early to say whether gold's done correcting or not. It could make an attempt at another leg down. But the more time it spends near $1,500, the less likely that is. And judging by the relative strength index (RSI) and moving average convergence divergence (MACD) momentum indicators, it's far from being overbought.

The Best Gold Stocks to Profit from the Rebound

I enjoy reading about the price of gold with Peter Krauth,I would appreciate anymore articles that he is writing about especially gold