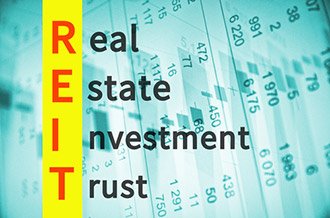 There are plenty of reasons to buy REITs. First and foremost among them are the high dividends they often pay out.

The highest-yielding REITs even offer yields in the double digits.

And with that in mind, today we're bringing you our list of five REIT stocks with high dividends.

Of course, the high dividends don't stop some people from second-guessing REIT investing, due to concerns about either taxes or interest rates.

Both concerns are overblown.

We frequently get the question "How is REIT income taxed?" or, more specifically, "How are REIT dividends taxed?"

It's true that dividends from REITs will typically be taxed at your ordinary income tax rate rather than at your capital gains tax rate.

However, as long as a REIT pays the required 90% of its taxable income to shareholders as dividends, that income does not get taxed on the corporate end.

In other words, you're getting a bigger payout than you would from a non-REIT stock, which in many cases will more than make up for the extra taxes you have to pay on your end.

Some investors also worry that rising interest rates could be trouble for even the best REIT.

However, in the nine instances between 1994 and 2017, when interest rates rose by more than 1%, REIT stocks rose in value six times.

So in fact, when you own a REIT, interest rates don't need to be a huge concern. If anything, REITs might be the place to be when interest rates are on the rise.

With that cleared up, let's find the REITs out there that we expect to put large dividends in your pockets for years to come...

The founder of Iron Mountain Inc. (NYSE: IRM) earned his fortune from mushrooms. He was even known as the "Mushroom King."

With the rise of the Cold War, though, Herman Knaust founded Iron Mountain to capitalize on the rising demand for secure storage.

Among the valuable documents stored at Iron Mountain facilities are the wills of Princess Diana, Charles Dickens, and Charles Darwin, as well as the master recording collections of Frank Sinatra and Prince.

By now, of course, most of the data is digital. And 95% of the Fortune 1000 stores its most sensitive data with Iron Mountain.

There's no question that data security has been a rising concern in recent years. According to researchers at Cybersecurity Ventures, cybercrime is expected to cost the world $6 billion annually by 2021. That's a 100% increase since 2015.

History in the Making: The Congressional JOBS Act has opened doors to the pre-IPO market - now, every American has access to the trend that put airplanes in the sky and light bulbs in every home... [Read the full story.]

But Iron Mountain hasn't been content to watch its earnings climb from that trend alone. It's been making an active push into emerging markets to boost its bottom line. Revenue from emerging markets accounted for 19% of the company's total in 2018, roughly double its share from five years earlier.

Iron Mountain pays a yield of 7.26% and has increased its dividend for nine consecutive years.

It also has a top score from our Money Morning Stock VQScore™ system, suggesting that you can expect a rise in share price as well.

Mergers and acquisitions in 2017 turned Sabra into a powerhouse in the industry, with an enterprise value of $7.3 billion and a footprint that covers 44 U.S. states and three Canadian provinces.

Demand for senior housing and healthcare services in general is on the rise as baby boomers enter their retirement years. The U.S. Census Bureau projects the number of Americans aged 65 or older to increase from 50 million to 80 million by 2035.

One advantage Sabra has over the competition is its diversification. No one tenant manages more than 9% of Sabra's properties. Sabra's top five relationships account for just 38% of its portfolio, compared to 54% for LTC Properties Inc. (NYSE: LTC) and 68% for CareTrust REIT Inc. (NASDAQ: CTRE). That gives Sabra plenty of flexibility in case the fortunes of any one company shift.

Hotels are among the most lucrative real estate properties you can invest in.

When they're successful, that is.

Success for most big, full-service hotels means that not only are the rooms full, but the restaurants are full and the conference space is being used.

That's no problem when there's a convention in town or when it's wedding season. But during the off-season, these hotels are losing money hand over fist with all the unused space and underwhelmed staff.

But the next REIT we're bringing you, RLJ Lodging Trust (NYSE: RLJ), has bypassed that problem by investing in business-oriented hotels. These establishments are designed to fill rooms, with limited dining services or meeting space. That means they can keep their expenses low and avoid the "boom or bust" inconsistency that plagues the industry.

RLJ's portfolio includes 109 hotels in 23 states and the District of Columbia, and the brands include Courtyard, Residence Inn, and Embassy Suites.

The stock pays a 7.95% yield, and it also has a top score on our Money Morning Stock VQScore™ system.

The idea of investing in a company built on mortgages might sound scary to anyone who lived through the mortgage crisis of 2007-08. But you can breathe easy. KKR restricts its lending to commercial properties rather than single-family home loans.

So even if there's another housing bubble, it's not going to sink KKR's loans.

Fifty-five percent of the portfolio is multifamily housing. Office space makes up another 32%. The remaining 13% is divided among hospitality, condominiums, industrial, and retail.

Another factor that protects KKR's position is that 99% of its loans are senior loans. That means the loans are usually secured, and KKR is among the first in line to recoup its money in the case of bankruptcy.

And now for the highest-yielding REIT on our list...