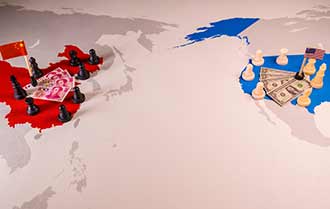 Despite its population of 1.3 billion people and an economy on course to be the biggest in the world, China has yet to be a military threat to the United States because of its navy. But China is trying to change that in a hurry. A recent aerial photo captured the scope of China's fast-growing naval development.

The footage shows that not one, but nine brand-new warships, including an aircraft carrier, are being built in a Shanghai shipyard.

Already, China is chief patroller of the South China sea, far from its 200-mile territorial waters. From Malaysia to Vietnam to the Philippines, other nations sail lightly in China's presence. It's been more than a decade since a U.S. aircraft carrier steamed through the Taiwan Strait. And to make it even more complicated, China is laying claim to many islands in the sea already claimed by other nations.

China now boast 25 modern destroyers, 45 modern frigates, and nearly 50 new submarines. That's up from virtually zero in 1990. And once they feel dominance in local waters, expansion from the Western Pacific to the Indian Ocean will be next on their minds.

From a May 2018 Reuters news report, China has built more ships since 2014 than are actively serving in the United Kingdom's fleet. And between 2015 and 2017, China built 400,000 tons of ships for its navy, roughly double what the United States built in the same time according to the International Institute for Strategic Studies.

Indeed, the threat of a naval war with China has been something we've been covering for a long time. But rather than worrying about geopolitical conflict, the real reason we are so interested is that there's a profit opportunity in both countries scaling up for battle.

Why China's Growing Military Could Strengthen Your Portfolio