Tesla Inc. (NASDAQ: TSLA) stock is up more than 36% for the month of January. But while Elon Musk fans laugh their way to the bank, the same problems keep long-term investors from buying the most valuable car maker in history. 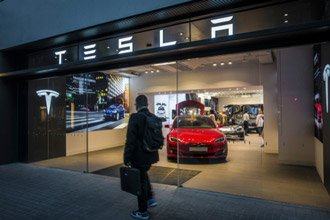 Money Morning Chief Investment Strategist Keith Fitz-Gerald said it best last week. There is no "easily discernible path to profits" with Tesla. You can ride the hype, and you can succeed - as many are currently - but you're taking a risk.

Of course, all investments carry some level of risk. But there's a difference between investing and speculation. We want you to invest based on actual data, not on a whim.

Media hype is not enough for us to consider a stock investable. Neither is a six-month bull run, for that matter.

Sure, the upside on Tesla is exciting. But our top dividend stock today has more than twice the upside potential of TSLA, in addition to a yield that's twice the S&P 500 average.

That's right; this dividend stock provides more than one concrete means to profit - that's what makes it one of the best dividend stocks you'll find today.

And we're going to show it to you.

But first, here's ultimately why some investors should still ignore the hype around Tesla.

Why Investing in Tesla Is Still a Risk

Over the last few years, Tesla has become known for its exceptionally high short interest.

Short interest is the percentage of a company's stock being borrowed by "short sellers" expecting to profit as the stock depreciates. They'll borrow the stock, sell it, and then buy it back at a lower price and keep the difference.

According to Barron's, the stock has about 10 times the average short interest for stocks in the Dow. That was written a month ago, when Tesla's short interest started ticking over 20% of total shares.

Today, short interest sits at 18%, which is still extremely high. And that means a lot of short sellers are getting crushed by its rise.

The latest Tesla surge shows that it's probably not a good idea to go bearish on the stock. But going bullish could be equally risky.

We can cheer the future of automated vehicles, space travel, and tunnel systems all we want. But it's true: Tesla's financials don't exactly "illuminate the path" as much as we'd prefer.

Of course, you can't ignore its $103 billion market cap - impressive for such a young company. But it has yet to be profitable.

Sure, the growth prospects are there. Some analysts have Tesla at $810 by the end of the year, a solid 41% gain from today's $573. But the company has yet to prove it's consistent enough to sustain that kind of growth.

Tesla has reliably failed to deliver on its goals thus far. In 2008, it had to borrow $40 million to complete orders for its Roadster without going bankrupt. In 2013, it couldn't sell enough Model S's and was nearly acquired by Google (NASDAQ: GOOGL).

In 2018, Tesla came short of weekly production goals again. This was also the year CEO Elon Musk came under fire by the U.S. Securities and Exchange Commission for possibly misleading investors with a tweet suggesting he would take the company private.

Most recently, the supposedly "unbreakable" windows broke on the Tesla Cybertruck as it was being unveiled in November 2019.

Of course, Tesla diehards will stay on the wagon until kingdom come. But this pattern of failures is enough to squelch any good faith from investors, at least until Tesla is profitable.

So instead of playing Russian roulette, investors can find stable income in high-yield dividend stocks. Remember, our best dividend stock today is dishing more than double the S&P 500 average yield.

Tesla might bode well for speculators at the moment. But if you're looking for sustainable growth and secure income, here's an example of a much more investable stock you can buy today.

A Stock Better Than Tesla