If you're spooked the new coronavirus could cause a stock market crash, you aren't alone. The Dow Jones started this week 400 points in the red as the outbreak continues to spread. 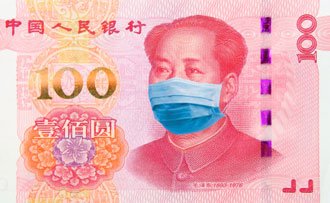 But a jittery few days doesn't mean a stock market crash is coming.

By planning ahead, you're in the right spot. We're going to dig into why the coronavirus is hurting stocks; plus, we'll take a look at what past outbreaks did to stocks so you'll be fully prepared for what happens next.

As always, our goal is to help you make money, and crises like these don't just create risks – they create opportunities too…

Why the Coronavirus Is Hurting Stocks This Week

Over 3,000 cases have already been reported in China, and it's widely speculated the government is downplaying the true number.

Wuhan, Chinese city at the center of the outbreak, is being quarantined, and makeshift hospitals are being built to treat the potentially infected. Hundreds of flights in and out of Wuhan have been canceled.

China's productivity is suffering as more people come down with the virus and more cities have to be quarantined. That's a major reason stocks are falling.

With China being a manufacturing hub for some of the largest companies in the world, like Apple Inc. (NYSE: AAPL), a slowdown could hurt earnings. Apple fell 4% on Monday.

An even bigger risk to stocks is if the virus spreads across the world. Over 100 people are being treated for it in the United States already. So far, the outbreak appears contained in the U.S., but a pandemic could slow the economy and hurt stocks even more.

To get a sense of the potential damage at stake here, we can look at past outbreaks…

How Past Outbreaks Hurt Stocks

Stocks were hit the hardest during the Ebola scare, when they plunged 8% in October 2014. But the slowdown didn't last for long. The S&P 500 grew 4% between October 2014 and January 2015 as the bull market run continued.

The H1N1 outbreak, also known as the swine flu, didn't halt the stock market's recovery in 2009 either, even though 265,000 Americans were hospitalized for it. The S&P 500 posted a gain of nearly 10% between March and May that year, just as fears of an outbreak were peaking.

While the overall markets powered through previous crises, some stocks still fell into correction territory.

The same thing happened to pork producers during the swine flu outbreak in 2009. Shares of Smithfield Farms fell over 20% as pork prices cratered.

So far, stocks are only down 2.5% during the coronavirus scare, but history shows there's much higher risk for individual stocks tied to the pandemics. And if the virus spreads even more, the losses to the broader market could grow.

Here's what to do…

How to Protect Your Money from the Coronavirus