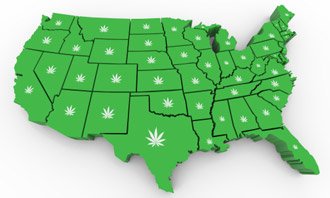 First, the bad news. The federal legalization of marijuana is unlikely in 2020.

The good news for investors: Federal marijuana legalization will happen eventually. It's a matter of "when," not "if."

This stock is set to double or more in the next 12 months. A recent catalyst has these shares already moving, so click here now to get the pick – it's free!

Despite the overwhelming support, federal marijuana legalization still faces several hurdles in the near term.

When Will Marijuana Be Legal Nationwide? Don't Bet on 2020

There were positive developments for cannabis in 2019. Most notable was the passage of the Marijuana Opportunity Reinvestment and Expungement (MORE) Act by the House Judiciary Committee in November.

Editor’s Note: If you’re looking for up-to-the-minute marijuana stock updates, follow our colleagues at the National Institute for Cannabis Investors. With daily updates, unparalleled analysis, and proprietary research tools, they are your final destination for all things marijuana investing. Click here to learn more.

It was the first ever marijuana reform measure to be voted on in U.S. Congress. And it was passed overwhelmingly (24-10) by the judiciary committee.

But that appears to be the end of the road for the bill. And with it ends any hope of federal legalization of marijuana in 2020.

For MORE to become law, it would need to be passed by the Senate. And Senate Majority Leader Mitch McConnell (R-KY) is notoriously anti-cannabis.

Not only is it unlikely that a republican-controlled Senate would pass the MORE Act, McConnell is not likely to even bring it to a vote.

So when will marijuana's federal legalization happen? Here's our prediction…

At Money Morning, we don't take sides politically. We don't have time to. But we are always watching how the political landscape impacts your money.

For marijuana investors – and those that favor cannabis's federal legalization – the politics of the situation are crucial.

I am from Kentucky and Mitch McConnell is not going to be getting my vote because he does not support the legalizing marijuana for everyone to use.