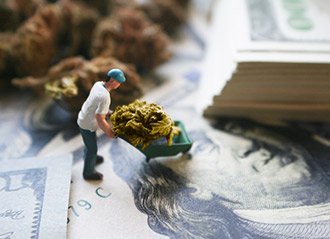 The legal cannabis industry could be worth more than $60 billion in the next five years. And cannabis investors who want a piece of that need to keep four stories on their radar this week.

Today, we're digging into the latest promises of candidates on the campaign trail, upgrades for weed stocks, and a major real estate deal that could foreshadow a wave of deal-making in 2020.

Once again, it was a busy week of politics at both the state and federal level. First, here's how Bernie Sanders moved cannabis stocks yesterday…

On Monday, the Iowa Caucus kicked off. Unfortunately, voting irregularities, confusion about the process, and glitches in voting applications have left political fans confused and uncertain about who won the event.

While everyone must now wait for the results to emerge (which could take weeks), everyone is turning their attention to the New Hampshire primary next week.

Sen. Bernie Sanders (I-VT) is widely considered the frontrunner heading into the event. And Sanders has made a significant announcement on his stance around legal cannabis should he reach the White House.

This is an intriguing development, because it will link Sanders' performance in the polls to the performance of cannabis stocks over the next nine months.

Although banks and healthcare stocks are vulnerable to Sanders' potential presidency, marijuana stocks could dramatically benefit from any success shown by Sanders in polling and primary votes in the months ahead.

And this is one of the stocks that could do it…

Innovative Industrial Properties will also provide reimbursement of up to $4.3 million for renovations and property improvements. This is IIPR's second acquisition and second leaseback with Green Thumb. And it is unlikely to be the last in the years ahead.

In November of 2019, IIPR conducted a sale-leaseback transaction for Green Thumb's medical cannabis cultivation and processing facility in Pennsylvania. The latter owns several cannabis procurement facilities that may become attractive to IIPR.

IIPR, a real estate investment trust, remains a solid buy for price appreciation and its rock-solid dividend in the year ahead.

Pay close attention to the latest report from BMO Capital Markets. Analysts at the firm released a hyper-bullish outlook on Canopy Growth Corp. (NYSE: CGC) and hiked their price target by 60%. The analysts said that the company struggled toward the end of 2019 because it produced too much of the wrong product – specifically soft gel capsules.

These analysts think that the company has solved its product challenges and will rally in the year ahead to more than $30 per share. That price target represents a potential upside of 35% from current levels.

But even bigger news is coming out of New Mexico…