The legal cannabis industry is looking forward to a banner year as nine states are set to vote on legalizing marijuana, recreationally or medically. But no one expected Virginia to be one of them. At least not so soon.

Virginia, one of America's most socially conservative states, just made progress on marijuana decriminalization. Specifically, an important state senate committee approved a bill toward that aim on Jan. 23. 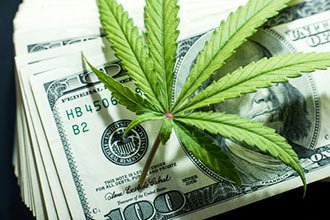 If the new bill is enacted, marijuana possession will no longer be a criminal offense. Currently, offenders get a $500 fine and possibly a month in jail – that's on the first offense.

The bill will make holding marijuana a civil penalty with no more than a $50 fine.

While this was being passed, however, the Virginia House of Representatives began setting up a task force to research the impact of legalization in the state – including production and sale – a sign decriminalization is just the start.

This will accelerate the cannabis industry's growth to $66 billion. The five-year projection from Grand View Research also adds a compound annual growth rate of about 24% for the cannabis sector.

But with surprises like Virginia, marijuana stocks could soar even faster. So cannabis investors should be on the lookout sooner rather than later.

We'll show you the perfect marijuana stock to capture these gains in a minute. First, here's why Virginia is such an important catalyst.

Why Virginia Is Moving Cannabis Stocks

Virginia has a history of controlling its recreational substances in a peculiar way.

The state doesn't have "bars."

There are plenty of places that look like bars. But if it looks like a bar, it's probably a restaurant that happens to serve alcohol.

This really just means there is a mandatory food-to-beverage ratio in Virginia. According to the Virginia Alcoholic Beverage Control Authority (VA ABC) alcohol sales should be no more than 55% of gross sales.

Apart from that, the state owns all the liquor stores. If you visit Virginia, you might hear someone talk about "stopping at the ABC" on the way to a celebration.

That's why it's almost jarring that this state would move so quickly on cannabis legalization. But looking at the numbers, it's a bit more understandable.

Illinois cannabis sales hit almost $40 million since decriminalization went into effect on Jan. 1. Along with excise and sales taxes similar to tobacco, there's a 3% cannabis retailers' occupation tax on those sales.

Sales tax in Illinois is about 6.2%, and excise taxes range from 7% to 25%. If you include just the occupation, sales, and lowest-possible excise tax, you know the State of Illinois has already made at least $6 million revenue in the first month of 2020. And that's low-balling it.

And through its latest actions, Virginia has revealed a sure "fear of missing out."

Virginia has the third highest alcohol taxes in the country, about $19.93 for every gallon of distilled spirits. In comparison, Wyoming and New Hampshire both have zero, and the average is $5 at a glance.

But Virginia is also earning from the state-owned liquor stores, which raked in over $1 billion in revenue for 2019.

If it plans to implement a similar state-owned structure with cannabis, it's easy to see why Virginia would put this issue front and center.