Gilead stock doesn't make a particularly strong first impression. But investors who overlook GILD stock are missing one of the industry's best investments. 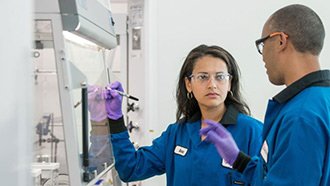 And the price-to-earnings ratio is a lofty 33.0.

So why am I telling you this is a good stock to buy?

For one thing, Gilead has a Money Morning Stock VQScore™ of 4.5. The VQScore is a proprietary system that identifies stocks likely to experience a price jump.

Historic FDA Approval: This biotech just received FDA approval for a first-of-its-kind treatment for a growing health crisis. There's still time to get in on the biggest gains - if you act fast. Click here to get this FREE pick now.

And Gilead Sciences Inc. (NASDAQ: GILD) has more going for it than those numbers suggest.

Gilead's future is much brighter than its past, and as investors, that's what we care about.

Before I get into what lies ahead for Gilead, let me give you an overview of the business...

Gilead describes itself as "a research-based biopharmaceutical company that discovers, develops, and commercializes innovative medicines in areas of unmet medical need."

It focuses on drugs that treat HIV, hepatitis C, cell therapy, and influenza. Gilead gets the bulk of its revenue - about 74% - from its HIV drugs.

The reason for the GILD stock price decline can best be summed up as "no good deed goes unpunished."

Gilead acquired a company called Pharmasset in 2011 that had developed a drug called Sovaldi that essentially cured hepatitis C. The U.S. Food and Drug Administration (FDA) approved it in 2013.

Within two years, Sovaldi and its derivatives tripled Gilead's sales. Profits more than quintupled, from $3.45 billion to $19.17 billion. 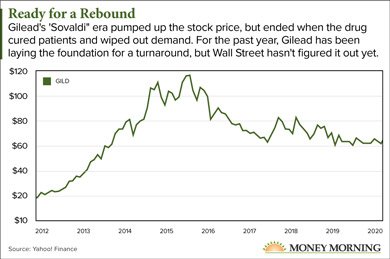 Gilead stock rocketed 475% from when it acquired Pharmasset in November 2011 to its peak in July 2015.

But Sovaldi is not just a treatment for hepatitis. It's a cure. That meant the pool of patients needing the drug began shrinking rapidly.

Gilead also got caught up in the 2016 outrage over high drug prices. A full 12-week treatment with Sovaldi cost $84,000. CEO John C. Martin was called to Washington to testify at a Senate hearing.

In the years that followed, Gilead began offering substantial discounts on Sovaldi.

The combination of cured hepatitis C patients and government-induced pricing pressure cut Gilead's revenue in half by 2018. And profits fell by more than half, to $8.73 billion.

More recently, Gilead has faced multiple patent lawsuits, including one that affects its Yescarta cancer drug and another concerning its Biktarvy HIV drug. The overhang from these lawsuits has also helped depress GILD stock.

And that brings us to the present - and why Gilead stock is a buy...

Why Gilead Stock Is a Buy