Investors should expect new tailwinds for cannabis in 2020 and beyond. Today, we're going to show you the top cannabis stock trends that will push marijuana stocks higher in the year ahead.

We'll also look at the impact of the COVID-19 virus on the marijuana industry.

First up, a pot stock that just beat earnings expectations. 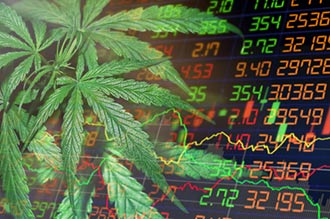 However, it's worth noting that Canopy faces a massive glut of cannabis. The company has produced 183 metric tons of cannabis since the end of 2017, according to MKM Partners. However, it has sold just 68 metric tons of that product. That means it has nearly two years of supply available even as it continues to grow and process cannabis.

Next, cannabis stocks could move on a Pennsylvania vote...

Marijuana Legalization in Pennsylvania Could Be Next

The Pennsylvania House of Representatives could vote on a recreational marijuana bill in 2020. Rep. Jake Wheatley (D-PA) introduced Bill 2050 on Tuesday and has a bold plan to grow the legal cannabis market in the Keystone State.

Our NEW Premium Stock Pick could double in the next 12 months. But the window is closing fast to get in on the BIGGEST gains. With a major catalyst just days away, the time to move is now. Click here to get the pick.

The bill creates rules for dispensaries, growers, and processors. It also will introduce a 10% wholesale tax on business-to-business cannabis transactions. Consumer taxes would start at 6% and double after two years. Despite the robust plan, Republicans control the House Health Committee and may prevent the legalization bill from receiving a vote.

Time will tell. But here's the real question at this very moment...

Will the Coronavirus Disrupt the Weed Industry?

First, trade disputes between the United States and China disrupted the supply chain for cannabis vaping hardware and other products. Now, concerns have emerged that the coronavirus may do the same for packaging supplies, LED lighting tools, and other products.

Richard Huang, CEO of Cloudious9, said this week that we will see a crunch for the hardware supply chain in the coming months. Huang noted that the vaping hardware sector relies heavily on China for batteries, cartridges, and vaporizers.

Lastly, legislators duke it out over New Mexico legalization.

First, the state has passed a new bill in the state's House of Representatives that will prevent non-residents from accessing identification cards for medicinal marijuana.

The new rule, likely to receive a signature from Democratic Gov. Michelle Lujan Grisham, aims to address residents of nearby states like Texas who found a loophole in the existing law. Opposition to the bill remains stiff due to the fact that it is the only form of healthcare that is restricted to state residents.

Meanwhile, a new bill to legalize cannabis has been tabled by the state's Judiciary Committee. Even though state residents and the governor back legalization by a wide margin, SB 115 will likely need to wait for a new legislative calendar. Advocates have said that legalized cannabis would generate $100 million in tax revenue over five years and establish up to 11,000 new jobs to the state. Although Republicans largely opposed the bill, two Democrats - who could have ensured its passage - voted to table the measure. Advocates believe that the next bill will provide a strong, new version.

The Countdown Clock Is Ticking...

With 32 states approving medical cannabis... over 50% working to decriminalize it... and 70 cannabis legalization bills sitting in Congress, we're predicting that full federal legalization of cannabis is just around the corner. And when this happens, it's going to blow the doors off of Wall Street, potentially flooding the industry with billions of dollars - and you're going to want to claim your stake before that happens. That's where the 2020 Pot Profits Roadmap comes in. Get your hands on this comprehensive guide to the cannabis industry now... before it's too late.