As market anxiety mounts, I'm continuing to look to the market itself for signals on how to properly react.

We are witnessing history in the making with these sources of market anxiety converging at once...

Stocks Flopping and Gasping Like a Fish on the Dock

On Monday, trading in U.S. stocks was halted for the first time this week to prevent further losses as each of the three major exchanges (DOW, S&P 500, and Nasdaq) hit 7%-plus descents. Trading was halted again on Thursday.

Stocks, of course, fell like rocks. Margin calls stacked up, and the selling sped up.

Stocks were oversold and trying to rise from the ashes. By Tuesday, those same exchanges surged north rather than south.

Futures markets were limit-down, then limit-up. 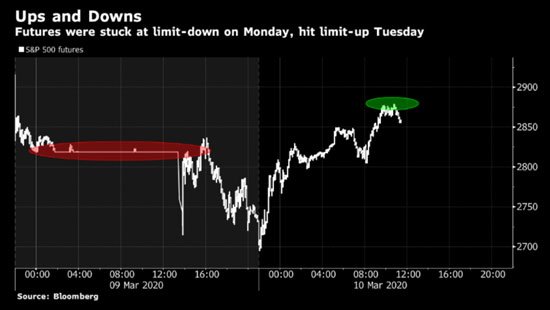 Such massive price swings are hardly a sign of "rational price discovery." But folks, there's almost nothing rational about these markets...

This stock price volatility is Market Anxiety Signal No. 1.

The VIX (aka "Fear Indicator") Skyrockets

Based on the VIX, we've seen a week of fear-spiking that surpasses data seen even during the Great Financial Crisis of 2008.

Last week, the VIX saw 46, which was an extreme event.

But by this week's opening day, the VIX hit 54 as the DOW fell 1,000 points, forcing the aforementioned circuit-breaking halt (i.e., "uh-oh" moment) on the markets.

Then by Thursday, the VIX jumped up to an alarming 67 as the DOW plummeted over 1,500 points, causing yet another circuit-breaking halt. 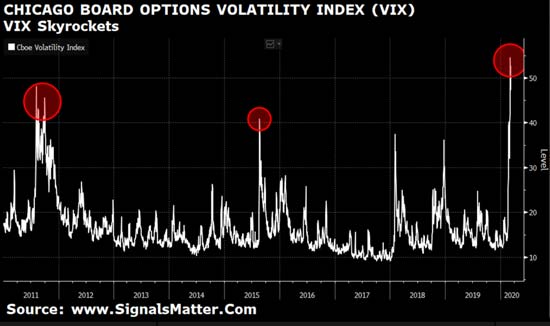 This VIX spike is Market Anxiety Signal No. 2.

If that wasn't alarming enough, we've also seen a week where the flight into the safety of Treasury bonds sent yields into the history books.

Tanking bond yields are classic symptoms of an anxious market.

Yield on the world's most significant 10-year sovereign bond (recently at 0.55%) is heading toward zero. Currently, it’s sitting at 0.77%. 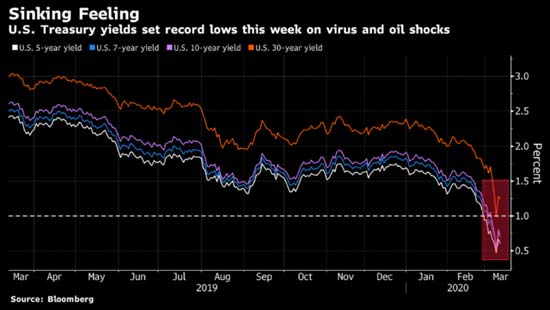 When yields get this compressed, the eventual "spring" upwards is only that much more dangerous. I've explained the tragic implications of this deadly yield compression at greater length here.

For now, however, such low yields simply mean that when adjusted for inflation, the oh-so-critical 10-year Treasury is rewarding investors with a negative 1.7% return.

Some reward, eh? Still think these markets are "rationally priced"?

Such tanking and compressed yields are Market Anxiety Signal No. 3.

Sadly, this yield absurdity is not just a U.S. problem.

As of today, over $16 trillion in bonds across the globe are trading at negative nominal yields.

To us, this figure alone is all the evidence one needs to see just how broken and rigged to fail the financial markets are.

Such staggering levels of negative yields, moreover, are not created by recessions or low inflation; they are artificially created by central banks.

This environment is simply tragic, as investors now have literally nowhere to go for safety.

Nor is there anything "natural" left in these artificial, Fed-driven markets for investors to gauge natural market behavior and hence natural risk signs.

Genuine capitalism, which has now been ruined by monetary policies that are, well, absurd, requires natural and efficient flows of capital to stay alive, but when $90 trillion worth of global bonds reach such artificially sustained bubble levels, it turns the $85 billion stock market into little more than a roll of the dice.

These totally distorted bond markets and their negative yield profile are Market Anxiety Signal No. 4.

At the same time, the Russian and Saudi Arabian cold war (price war) in the oil space just sent oil futures to lows not seen since 1991. 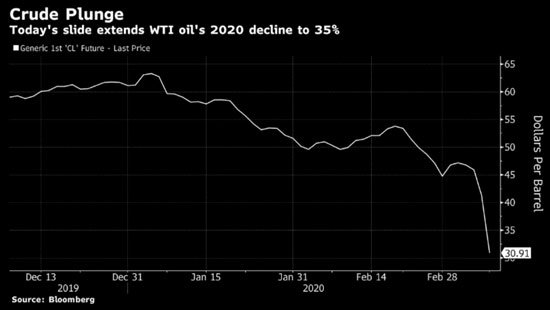 This is Market Anxiety Signal No. 5.

Perhaps most disturbing, yet largely overlooked as stocks were tanking, was the fact that corporate credits had essentially stopped dead in their tracks.

For over a week, not a single corporate bond was released.

The ticking time bomb that is the corporate debt bubble is the real virus killing these markets.

We've been warning for months that the low-rate Twilight Zone created by the Fed has been the sole reason otherwise zombie companies with more debt than income have been allowed to survive - that is, by borrowing today to pay for yesterday.

But for at least seven days, even the zombies were unable to raise their bloodshot eyes as credit issuance halted.

Debt, folks, is what greases the wheels of the post-2008 debt-driven "recovery." Debt allows otherwise sick companies (think GE and Boeing) to borrow funds to buy back their own shares and issue dividends despite making no profits while pretending to evidence earnings "growth."

And just imagine what happens - and will happen - to those tanking, debt-soaked energy names that everyone was buying like mad just two years ago when oil stocks were yesterday's hero rather than today's goat.

When the credit (i.e., debt) markets seize up, things fall apart. This week's volatility is what that looks like in real time.

But the real illness - the debt illness and the hidden sins of the U.S. credit markets, can easily send these markets even lower.

What we are seeing in the credit markets is Market Anxiety Signal No. 6.

Where We Stand Now - a Market with a Broken Back

As I mentioned, we are witnessing history in the making with all the foregoing sources of market anxiety converging at once. The financial system, so completely distorted by over a decade of central bank "support," is now like a ship with a blind captain, as evidenced by all the historical gyrations discussed above.

And now, as a black swan virus triggers even more uncertainty ahead (i.e., Market Anxiety Signal No. 7), all that the financial experts of the world's governments and banks can think to do is, alas, crank rates even lower and create more debt, as that is all they know how to do with their backs this firmly and habitually pressed to the wall.

But lower rates or more absurd money printing won't be much help to the supply-chain woes handed to the global markets in the backdrop of a global virus.

In short, the old tricks just aren't working, as made empirically clear by the record-breaking speed and size of the current market crisis. 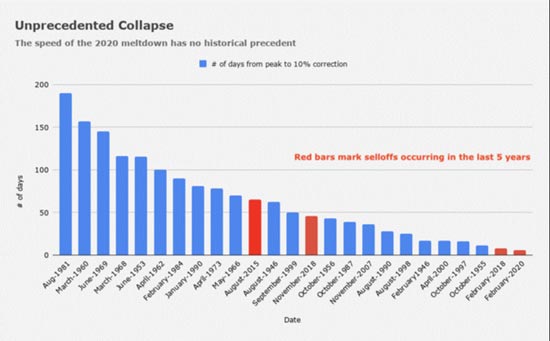 Such a rapid and deep fall in the stock market is Market Anxiety Signal No. 8.

Now, all the key risks - which I've been watching for months, including the hideous dangers of passive ETFs, robo-trading, tanking pension funds, increasing Fed impotence and dangerously compressed bond yields - are converging at warp speed.

Again, folks, this is not fear-mongering or doom and gloom posturing. These are just cold facts, and being careful now is just common sense driven by a twist of market skill.

Following an early stint in banking in Frankfurt, Germany, Matthew Piepenburg came of age as a highly successful hedge fund manager during the dot-com boom of the early 2000s and subsequently managed a hedge fund based at a leading Wall Street bank. In addition to direct portfolio management, he has allocated billions to an international swath of alternative investment vehicles during two historical market cycles while serving as a managing director, general counsel, and CIO to a single- and multi-family office.

Matt has extensive knowledge of global and domestic market hazards and opportunities, so he places a specific emphasis on risk management in the current macro backdrop.

Matt and fellow seasoned investor Thomas Lott are the founders of SignalsMatter.com, where they offer a contrarian approach to portfolio guidance, backed by real facts.