The Chainlink cryptocurrency, despite ranking in the top 20 by market cap, gets a lot less attention than other top second-tier cryptos such as Tezos, Tron, and Monero.

But in many ways, Chainlink (LINK) is well ahead of most other cryptocurrencies. Investors started to take notice last year - LINK popped 500% in 2019 and is up about 147% so far this year. 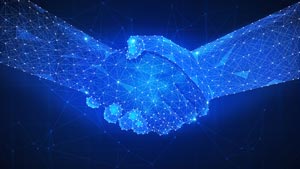 And several Chainlink price predictions see that momentum continuing into 2021, with the most optimistic forecast calling for a gain of more than 350%.

Forecasts for the longer term - three to five years - predict gains of as much as 2,475%.

But before we look at those forecasts, you need to know why this particular crypto is so compelling.

"Chainlink is the most successful blockchain network over the last two years, and we still feel like the underdog," Michael Anderson, co-founder of venture capital firm Framework Ventures, told Coindesk last month. Framework invested in Chainlink in 2017.

Chainlink is truly a dark horse of the crypto world...

The Chainlink token isn't anything special by itself. It's what's known as an ERC-20 token - a digital asset that rides on the Ethereum blockchain. There are thousands of ERC-20 tokens, each tailored for a different purpose.

The Chainlink token is part of a larger system that seeks to provide secure, trusted "oracle" data to "smart contracts." Smart contracts run on a blockchain - they execute automatically when the conditions set out in the contract are met. An oracle is a trusted, online source of data that can provide the information needed to execute the contract.

But smart contracts can't connect to oracles on their own and need help determining which are the most reliable and accurate at any given moment. That's where Chainlink comes in.

Bitcoin Master Class: Bitcoin's launching into a critical stage that could create billions in new wealth, and our Master Class offers access to everything you need to know to cash in. Watch now...

The purpose of the project is to serve as a trusted middleman that connects blockchains running smart contracts with the data required to execute them. Chainlink evaluates the source oracles to determine which is the most trusted an accurate. Otherwise, smart contracts need to link to a single oracle ahead of time. If the oracle fails, the smart contract won't execute properly (or at all).

One of the key questions to ask about any crypto is whether it has a real-world use. The Chainlink token as a part of this system most definitely does.

In fact, Chainlink is already in use. Last year, the number of smart contracts using Chainlink grew fivefold.

And it has attracted more than 200 partners both inside and outside of the crypto universe - including some very large and well-known companies.

Chainlink is also working with SWIFT, the global transaction network that connects virtually all banks and financial institutions, on a "smart oracle" that will allow smart contracts to interact with more than 11,000 banks worldwide.

Earlier this month, the World Economic Forum put Chainlink on its list of 100 Technology Pioneers for 2020, one of just seven blockchain companies to earn that honor.

What all this tells us is that Chainlink is an unusually strong project with a ton of potential. If it succeeds in becoming the main provider of oracle services, use of the LINK token will soar - and the price along with it.

That's what crypto forecasters are looking at when they see big gains for LINK.

Now here are the top Chainlink price predictions for 2021...

These Chainlink Price Predictions See Gains of 2x to 5x