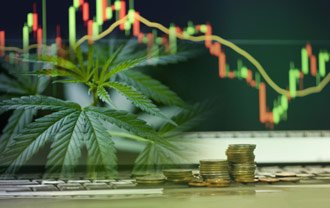 Cuomo said in May that he believes the state will legalize cannabis. And now that the state's coronavirus numbers have shrunk from over 11,000 to around 600 daily cases, the governor may have room on his plate to spare.

A state like New York legalizing weed would be a huge catalyst for cannabis legalization in the United States. And we're going to show you how to start investing in cannabis and create generational wealth today.

First, with its latest cannabis news, the State of New York echoes something we heard from other states early in the COVID-19 crisis.

Oklahoma officials proposed legalizing marijuana as a way to raise the money. Fetgatter said the state could see an additional $100 million per year in tax revenue if this happens.

Oklahoma followed behind Illinois and Colorado, which legalized cannabis last year. Colorado sold $1.75 billion in cannabis. Illinois' tax revenue is expected to soar from $34 million to $375 million by 2024.

Now, it's New York's turn. Here's what to expect from the state down the road. Then we'll get into how investing in cannabis could be a huge profit opportunity for you…

Despite rumors of legalization coming down the pike over the last year, the state has delayed cannabis legalization. Cannabis reform advocates thought change would come in the 2020 budget, but state lawmakers missed their April deadline.

Still, 65% of New York state residents support legalization, according to Newsday. So reform is likely underway. Recent developments say that could be sooner than later…

The COVID-19 crisis took center stage in the early months of 2020. That understandably eclipsed some of the cannabis reforms from being discussed.

One reason Oklahoma was more capable of talking about legislation was that its coronavirus cases hovered no higher than 169 between April and May. New York had a peak of 11,571 back in April. It was considered the coronavirus capital of the Northeast.

Governor Cuomo said that cannabis legalization is a "complicated issue" and that it should be dealt with in a "comprehensive way."

He alluded to his occupation with the state's failing budget during the COVID-19 crisis, which he believed did not get the federal support it needed. This may have kept him from handling marijuana legalization "comprehensively."

But now that New York's numbers have calmed down, the governor may have an opportunity to do that. The state can begin to focus on other issues in addition to the safety and health of its citizens.

Cuomo said he already has "worked very hard" to pass cannabis legalization. And now he has an opportunity to prioritize it.

A state as prominent as New York passing cannabis legislation would be a huge milestone for marijuana in the United States. It's likely to send marijuana stocks soaring higher.

Now, here's how you can start profiting from cannabis stocks today…

Get These Top Cannabis Stocks Before It's Legal

The adult-use recreational cannabis industry could hit a peak of $73.6 billion in less than 10 years. The National Institute for Cannabis Investors (NICI) has teamed up with legendary quarterback Joe Montana to show you how to grab a piece of that.

But what does a pro football player and a group of cannabis researchers have in common? Cannabis investing, of course.

Joe Montana is a startup investor. And he's had a few successes in his day. A couple of his most famous early investments were in Dropbox Inc. (NASDAQ: DBX) and Pinterest Inc. (NASDAQ: PINS).

He recently started looking at the cannabis industry for opportunities and realized the potential of cannabis investing in the early stages. That's why he got together with Mike Ward, founder of NICI, to give you a roadmap for success investing in cannabis.

And that's just the beginning. Here's where you'll find a list of NICI's 10 top cannabis stocks to watch…

You Could See Gains of up to 1,000% with the Three Hottest Trends in Cannabis

Four of the brightest minds in cannabis recently gathered at the 2020 American Cannabis Summit – and they revealed what could be the three hottest trends in cannabis this year.

But you're going to want to jump on these trends before federal legalization – because once the institutional money starts pouring in, the prices could shoot through the roof.

You can view the entire Summit right here.