We're going to show you that penny stock today.

According to the U.S. Securities and Exchange Commission, penny stocks trade under $5. That allows them to make huge percentage shifts in response to the broader market. 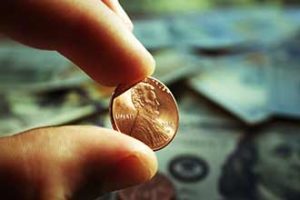 Penny stocks typically react to news of improvement in the business or some sort of transaction that increases the company's value. Once they trade back above the $5 level, they then begin to attract attention from institutional investors.

That demand is what can drive smaller companies to levels that offer life-changing profit opportunities.

Because of their unique trading characteristics, we can usually find penny stock opportunities regardless of which direction the stock market is moving.

In fact, all of our top penny stocks today have money-doubling potential.

The Best Penny Stock in a Market Crash

Medallion Financial Corp. (NASDAQ: MFIN) was primarily in the business of financing taxi medallions in major cities in the Northeastern United States. It was an incredibly lucrative business as taxi medallions were in short supply and high demand.

The advent of ride-sharing services such as Uber Technologies Inc. (NYSE: UBER) and Lyft Inc. (NASDAQ: LYFT) has hurt the taxi business. Medallion has shifted much of its lending activity to consumer and commercial loans.

The total loan portfolio today is over $1.1 billion, and net taxi medallion loans are just 8% as of the end of the second quarter. The company has $100 million in cash on hand, along with $57 million of investments and securities. Even if all the taxi loans defaulted, the company should survive.

While COVID-19 has made Medallion's lending business difficult, the company's consumer and commercial portions are growing nicely. In the most recent quarter, the personal loan portfolio showed that net recreation and home improvement loan portfolios increased by 16% and 35%. Medallion also began making loans with its first fintech partner during the quarter.

While there may still be challenges, this company is worth two to three times the current stock price in a worst-case scenario. On top of that, the business is expected to grow by at least 15% a year despite the taxi medallion portfolio issues. Wall Street might not be paying attention yet, but it could give penny stock investors massive profits over the next few years.

The Best Penny Stock to Own When the Economy Reopens

These venues have driving ranges as well as other sporting and gaming options. Their centers also have bars and a restaurant, so it's about more than just golf. Centers like these have become very popular across the United States in the past few years.

At the start of the second quarter, all of Drive Shack's facilities were closed because of COVID-19. As of this week, all its traditional golf courses, and all but one of its entertainment golf venues, are open for business. The three entertainment golf locations that reopened are in West Palm Beach, Richmond, and Raleigh. Demand was so high that all three properties were running at breakeven in just 21 days.

The traditional golf business has seen strong demand as well. Traditional golf courses that were open for the full month of June, which excludes the courses in New York and Texas, reported that private course membership sales increased 32%, and member rounds increased 20% compared to June 2019.

Drive Shack plans to begin construction of their mini-golf locations in Dallas and Charlotte in fall 2020. Current plans call for 7 of these concept locations to be opened in 2021. These are adult-oriented locations with a restaurant and high-end bar, so it's nothing like the roadside mini-golf locations you see in some resort towns.

Drive Shacks is a fantastic growth story being ignored by Wall Street because of the pandemic. The stock is worth at least twice the current stock price and has the potential for massive long-term returns.

Among Peter Lynch's rules for finding the perfect stock, he suggested buying a stock in an industry that everyone hated. He also liked companies that were in a messy, filthy industry.

Our best penny stock for the week meets all of these criteria. Its workers go home filthy at the end of the day. Its product is hated by most of the world's developed population.

Our pick is a coal stock.

Hallador Energy Co. (NASDAQ: HNRG) mines and sells steam coal to the power generation industry. They have several mines in the Illinois Basin and are based in Terre Haute, Indiana. Everybody hates coal, but they love their electricity. The truth is that we still get more than 20% of our energy from coal-fired plants.

The bottom line here is that we can hate coal, and we will continue to reduce the use of coal in the United States. But for now, we still use a lot of it to power the country.

That's why analysts are giving the stock a target of $4 this year. That represents 354% growth from today's $0.88.

Action to Take: As the broad market swings up, many penny stocks will swing with it. Our best penny stock now could be headed for 354% growth in 12 months or less. Hallador Energy Co. (NASDAQ: HNRG) is a coal stock thriving from a continued dependency of electrical power on coal. It trades for $0.88 right now, but some analysts think it could reach $4 quickly.

5G Companies Were Sitting Silent... so the FCC Launched a Multibillion-Dollar Initiative to Wake Them Up

5G isn't just an Internet upgrade anymore. The FCC just injected an unprecedented amount of money to roll it out faster than 1G, 2G, 3G, and 4G combined.

But this isn't just a positive sign for the roughly 162 million Americans who've recently experienced slowing Internet. If our projections hold, you could net a huge payout by year's end.