When you run a marathon, it's better to focus on the finish line rather than each breath or stride. That was the first thing that came to mind last week as the tech-heavy Nasdaq dropped roughly 7% and Apple saw $180 billion erased from its market valuation on Thursday, the most any U.S. company has ever lost in a single trading day. 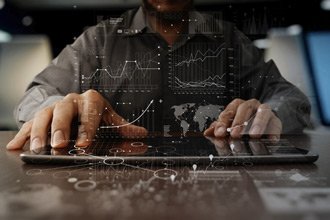 Focusing on the finish line is important not just in sports but also in the stock market. While the tech sell-off hammered markets over the last week, it is important to look at the bigger picture and look at the move as a healthy pullback for a bull market.

This is temporary, but the best tech stocks will continue to rise long into the future.

WARNING: 22 million shares of this stock trade hands every day – make sure you’re nowhere near it. Click here to get the ticker...

The same could also be said for semiconductor company Nvidia Corp. (NASDAQ: NVDA). It saw an over 50% drop at the end of 2019 and then in 2020 dropped 30%. But if you held on through the drops and even bought right at the previous peak, you would still be up over 70%. Going out even further, you could be up 10,000% and 30,000% respectively. Those are some big gains anyone would be crazy not to want.

That is why it is important to look at the bigger picture. The Nasdaq is still up roughly 60% from its lows in March and 10% above the peak before the pandemic. This comes at a point when the economy is still far from recovered and there is an unemployment rate of 8.4%.

So, when I see pullbacks like this, I go back to tried and true companies that survive these market conditions and have the fundamentals to move higher.

And to help you do just that, I've keyed in on three of the best tech stocks you can buy. These companies will be stalwarts of your portfolio for decades, and they just happen to be "on sale" thanks to sellers with a short-term view of the world.

These Top Tech Stocks Should Be on Your Shopping List

Microsoft Corp. (NASDAQ: MSFT) may be one of the most well-known companies in the world. There is a very good reason for it.

Almost every single person uses its products whether they know it or not. While you may have heard of Microsoft Windows, Word, Outlook, or Excel, it also provides cloud infrastructure for 85% of the Fortune 500. The company has also made sure that remote workers can continue to be productive with products like Microsoft Teams, its chat, meetings, calling, and collaboration tool. In April of this year, it was already up to 75 million daily active users. On top of providing world class products, Microsoft has increased its dividend for the last 18 years, making it a great stock to buy on a dip.

Qualcomm Inc. (NASDAQ: QCOM), while not as well-known as Microsoft, might as well be given its dominance in the semiconductor market. In 2019, the smartphone application processor market was roughly $20 billion in size, and Qualcomm had the largest market share at 36%. That means its product was in over one-third of all smartphones in the world. Even better, according to Strategy Analytics, it captured over 50% share in 5G smartphones. With 5G as the future, this could be good news for Qualcomm. Not only does it make semiconductors for smartphones, it makes chips for cars, cameras, networking equipment, and IoT solutions for the industrial market.

If you prefer not to hold individual stocks and like to hold a basket in the form of an ETF, look no further than ARK Next Generation Internet ETF (NYSE: ARKW).

Up over 100% since March, this fund is the top-performing actively managed ETF. This fund aims to invest in companies that develop, produce, or enable cloud computing, e-commerce, artificial intelligence, blockchain, and many other technologies. In other words, this is the most exciting slice of the already hot tech sector.

Top holdings including electric car manufacturer Tesla Inc. (NASDAQ: TSLA), streaming media player Roku Inc. (NASDAQ: ROKU), mobile payments provider Square Inc. (NYSE: SQ), online education provider 2U Inc. (NASDAQ: TWOU) and Sea Ltd. (NYSE: SE), one of the largest e-commerce companies in Southeast Asia. This fund looks to the future, and if that is where you want to invest, this should be the stock to hold.