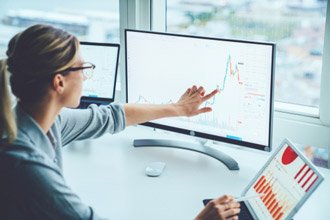 The leading pandemic and work-from-home stocks have had spectacular years so far.

Companies that made work-from-home easier have seen profits shoot higher. In some cases, these changes will be a permanent part of the business and personal landscape.

And two companies that have ridden this trend to new heights are Zoom and DocuSign. With fewer people commuting to offices and more instead conducting business online, these companies have been the breakout stars of 2020.

But if you could only invest in one of these companies going forward, which is the better stock to buy now?

Zoom Video Communications Inc. (NASDAQ: ZM) is an excellent example of a permanently changed company. Zoom has gone from a novel idea to a required tool for school and business. Families have used it to stay in touch since Sunday dinner together was not an option when we were all shut in.

Zoom's revenue and profits have exploded higher. Earnings are up more than 600% this year and are accelerating. In the most recent quarter, profits rose by more than 3,000%. Analysts can't keep up, and Zoom has surpassed the consensus estimate by at least 100% in each of the last four quarters.

Wall Street is scrambling to raise estimates to reflect how strong the business has been since the pandemic hit our shores. The estimates for full-year 2020 profits have been raised 25 times in the last month alone.

Zoom is one of the few stocks that didn't sell off very much when the economy was shut down in March. As the market fell by more than 40%, Zoom barely budged.

While 95% of all stocks fell below their moving average during the sell-off, Zoom was one of the magic 5% that did not fall below that significant support line. Traders who took note of that powerful performance have made an enormous amount of money since.

The company's document preparation and e-signature software allowed many businesses to stay in the game during the shutdown.

Had the pandemic hit America's shores before DocuSign's technology was perfected and we had the bandwidth for this to be used on a widespread basis, we would have seen hundreds of thousands of additional business failures over the summer.

The business has been fantastic. In the most recent quarter, DocuSign reported that billings grew 61% year over year to $406 million, and revenue grew 45% to $342 million.

The company added more than 88,000 new customers in the quarter. That's a 13% total increase. And now DOCU has almost 750,000 customers worldwide.

DocuSign has exceeded anything Wall Street thought it could achieve. It has surpassed analyst expectations for the last four quarters. Three of the company's earnings beats were by more than 100%.

Estimates have been raised 15 times in the month as analysts scramble to keep up with the business's rapid growth.

In July, DocuSign bought LiveOak Technologies – a company it has been working with for some time.

LiveOak makes it possible to conduct business via video conferencing that formerly had to be done in person. DocuSign intends to use its platform to launch DocuSign Notary, a new platform that will allow documents to be notarized online.

If you have ever had to track down a notary at the last minute, you know what a game-changer this could be.

DocuSign is another one of the strong 5% of all stocks that never closed below the 200-day moving average back in March. The stock touched the 200 day in Mid-March and rocketed higher when the markets began to recover.

Which Is the Best Work-from-Home Stock?