Before the pandemic, GameStop stock looked like it was headed for oblivion.

GameStop Corp. (NYSE: GME) sold new and used video games and consoles out of brick-and-mortar stores. It was a great business a few years ago, but gaming has increasingly moved online. Gamers can now download most software these days. A trip to a retail store isn't needed as much anymore. 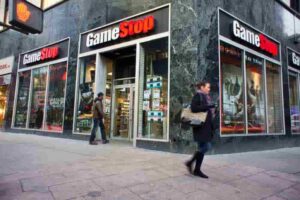 And gamers who prefer to buy physical copies of games can buy them on Amazon.com Inc. (NASDAQ: AMZN), usually at lower prices.

Then the pandemic arrived, and retail stores were closed in many states across the country. GameStop shares traded down to $2.57 as the company's liquidation appeared increasingly likely.

Then the situation changed. The company came back into favor in dramatic fashion and has seen its shares rise by 183% in the last month alone.

Investors are rightly wondering what on earth is going on here.

Is GameStop now a must-own growth stock? Or is it a clunker about to fizzle out?

I'll break down what's going on with this stock and show you whether it's worth stashing in your portfolio right now...

What Happened to GameStop?

The GameStop saga began last year, when Michael Burry of "The Big Short" fame announced that he had purchased 3 million shares of the company. At the time, Burry noted that both Sony Corp. (NYSE: SNE) and Microsoft Corp. (NASDAQ: MSFT) had new consoles planned for 2021 that would still have disc drives. This suggested that GameStop still has a future in selling the latest consoles and game discs. Burry also wanted GameStop to use half of its cash hoard to buy back stock.

Other investors took notice of how undervalued the retailer appeared to be. GameStop had $5 a share in net cash that could be used to buy back stock or improve its presence in the all-important e-commerce markets.

Hestia Capital Partners LP and Permit Capital Enterprise Fund LP bot took an activist position in the company. At the most recent annual meeting in June, both funds gained a seat on GameStop's board.

Last September, Ryan Cohen bought 9% of the company through his investment fund RC Ventures. He has since added to the stake and currently owns 9.98% of GameStop.

Why does that matter?

Ryan Cohen is the founder of Chewy Inc. (NYSE: CHWY), and he is still flush with the $3 billion he got for selling the pet food delivery company to PetSmart back in 2017.

Last month, he revealed that he was having talks with management and was willing to become more involved in GameStop under certain circumstances that he believes are likely to produce the best results for all shareholders.

In other words, he is considering buying the company and running it as an e-commerce business. Mr. Cohen has said that he thinks that GameStop can have a significant presence in the online market and eventually challenge Amazon in the online sales of games and gaming devices.

A move to a larger online presence would also reduce the end for brick-and-mortar store location. That would eliminate a lot of store expenses.

Challenging Amazon in anything is a steep hill to climb, but we are talking about a guy who sold a pet products delivery company for $3.5 billion.

There are a lot of hedge funds with large positions in the stock. This week, Senvest Management LLC revealed that it had purchased over 3.6 million shares or a 5.54% stake in GameStop last week.

Institutions own a lot of stock as well. Blackrock has over 17% of the company.

Mr. Cohen may be able to buy the company, but he will not be able to steal GameStop at a deeply discounted price.

This is especially true given last week's announcement of a long-term partnership with Microsoft. Under the agreement, GameStop will upgrade its stores with the software maker's cloud and hardware service. GameStop said that it would roll out Microsoft's 365 services and workplace messaging app Teams in its stores and equip store associates with new Surface devices.

The deal also allows GameStop to sell the Xbox console and a two-year digital subscription package with no up-front costs. The launch of the new Xbox consoles is in November and could lead to a surge in GameStop revenue.

Our best guess is that it would take an offer close to $20 to convince the other activist and institutional shareholders to agree to a deal.

That could still be a great deal for Mr. Cohen. If he can move more of the business online and eliminate brick and mortar costs, the bottom line could go from red to black if sales stay even. If he grows sales at a decent rate while increasing the profit margins, the $1.3 billion price tag at $20 per share could be a bargain in a few years.

With shares currently trading for $13.76, that makes GameStop stock a decent buy.

But there's a better way to do it than simply stashing it in your portfolio...

How to Play GameStop Stock