The stock market went off on a sudden tear this week, and there's no signs of it slowing down soon. The sudden change caught just about everyone by surprise too, so we wanted to show you exactly why.

You see, the sudden stock movement is just par for the course this year.

After the corona crash sent stocks plunging in the spring, a breakneck rally launched stocks to all-time highs by August. The S&P 500 gave up 34% between February and March, then rocketed 60% higher between March 23 and Sept. 2, hitting its all-time high in the process. 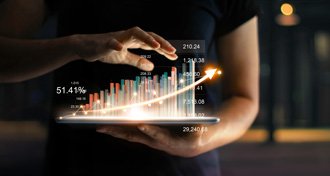 But since then, it's floundered, dropping as much as 9% before nearing (but never beating) its highs again.

Analysts have chalked that sideways trading up to a number of reasons, from rising coronavirus cases to the lack of a new stimulus bill.

But once election week got here, investors were tired of waiting around for good news. The Dow has exploded over 7% higher since Monday's open and is currently the in the middle of a four-day streak of triple-digit gains for the index.

You might be scratching your head a bit about what's causing that. Even more importantly, you might want to know how long it's going to last before putting some cash back into this market.

We're going to break it all down for you so you know exactly what's going on before you dive in.

Plus, we'll show you the most profitable way to do it too…

Why Is the Stock Market Going Up Now?

There are at least five major reasons the market is rising right now. Let's dive in to each one and see how they hold up.

Now that the election is over, Congress might finally get back to work to pass a stimulus bill.

As Money Morning Chief Investment Strategist Shah Gilani puts it, "The market knows stimulus is coming; it's just a question of when."

With the economy still struggling, a second stimulus bill has long been needed to keep Americans and businesses afloat. But the political back-and-forth got in the way.

Negotiations between the White House and Congress lingered for months before finally breaking down before the election as the Senate recessed until Nov. 9. A big part of those talks falling apart likely had to do with which side would get the credit for sending Americans money just before the votes were cast.

With that out of the way, it looks like Congress will be more willing to get things done.

Mitch McConnell, the Senate Majority Leader, has already said a new stimulus bill is his "top priority" before the end of the year.

Speaker of the House Nancy Pelosi and Treasury Secretary Steven Mnuchin were already close to agreeing on a $1.8 trillion package. In fact, they'd agreed on the topline number and sending another round of $1,200 checks to eligible Americans, but were quibbling over coronavirus testing funding.

Wall Street anticipates a new deal getting through by the end of the year or after the next president is inaugurated in January, at the latest, so they're happy to jump back into stocks.

The Outcome of the Election

Another reason for the rally is that Wall Street is getting a glimpse of what the next government will look like. They like what they see.

The most likely outcome right now is a Biden presidency with a Republican Senate. It's no wonder why investors might look forward to this outcome, either. According to investment bank Jeffries, the average gain for the stock market under divided government when the president is a Democrat has been 34%.

The specifics make sense too. A divided government can just about guarantee taxes won't be going up, and it's unlikely any new Wall Street regulations will make it through. Plus, we'll likely see the trade war wind down under a President Biden, which Wall Street likes.

Of course, with plenty of ballots left to count, we have no real winner, but Wall Street likes the other potential outcome too. That's a Trump presidency with a Republican Senate, which means the status quo continues. And the status quo has been pretty good to Wall Street.

Then again, there's a small chance the fate of the Senate is left up to two run-off elections in Georgia, but that doesn't seem to be slowing stocks down at all.

The Election Is Over

While investors might find something to like in the outcome of the race, they might also be happy it's over. The rally started Monday, just before election day, and has continued through even though the race is still too close to call.

But after months of intense campaigning, debates, and speculation, we're finally getting to put it all to bed. Investors may have been so eager for it to end and for the country to move on to other issues that they dove back in ahead of the election.

Lost in all the election noise is that we're knee-deep in another earnings season, and some of the numbers have been very encouraging.

Even as the pandemic tamps down the economy, companies are still making money and beating Wall Street expectations, which is encouraging investors to get back in the market.

You can expect more big-name earnings coming in the next week too, including Walt Disney Co. (NYSE: DIS) and Cisco Systems Inc. (NASDAQ: CSCO).

The last reason stocks are up right now is simply momentum. Investors have FOMO (fear of missing out) when they see stocks take off and they jump in to catch the gains. As more investors pour in, stocks tick higher, and more money comes flowing in.

With many investors hoarding cash amid the fall volatility, there is plenty of money sitting on the sidelines waiting for an opportunity. As stocks started to rally, anyone waiting on the right time to strike had to make a quick decision to get in or miss the gains.

This may not be a sustainable catalyst long term, but it's certainly a reason for stocks to go up in the short term.

Why Stocks Could Go Down Again

Even with the latest rally, the market could tumble again.

For one thing, the coronavirus pandemic continues to expand in the United States, with several states like Texas, Wisconsin, and Iowa reeling from the spread.

That's going to keep a damper on any sort of economic recovery until a reliable vaccine is available and widely distributed in the United States. More bad economic news over the winter stemming from the pandemic could ignite another sell-off as investors realize companies are going to be making less money again.

Another potential downturn could be ignited if a battle over election results creates confusion or unrest over who won. Court battles are already underway, and if any of these overturn the results or drag on through December, investors might grow weary. Uncertainty is bad for markets, and this could inject it right back in.

Shah tells us this "nightmare scenario" could happen, and if it does, "stocks very well could sell off as people take profits off the table – there's a lot of profit on the table right now!"

That's why it pays to be vigilant even during a rally like this one.

And that's also why we're not only showing you the best stocks to buy, but the stocks to avoid too.