Shares of AMC Entertainment Holdings Inc. (NYSE: AMC), the large movie theater operator, soared by more than 30% on Tuesday as investors made bets the company could survive the pandemic. AMC said it had obtained $100 million in financing from Mudrick Capital Management, a distressed debt investment firm in New York. 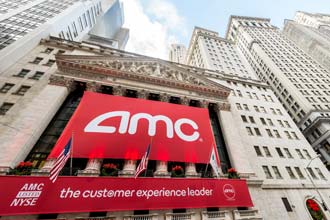 The firm sold five-year notes with a 15% interest rate.

With the vaccine being delivered and promises of accelerating vaccination programs in the months ahead, could AMC stock make it through the other side of this and recover?

It could. But it is an uphill battle.

There may be a "right" time to buy AMC stock, under certain conditions…

Raising $100 million is nice. But it needs a total of $750 million to survive through the end of the year.

These companies have even offered to put up the $1 billion in debtor-in-possession financing that would be required to keep the theaters operating all year while the bankruptcy proceeding is completed.

WARNING: It's one of the most traded stocks on the market every day – make sure it's nowhere near your portfolio. WATCH NOW.

Why would they encourage a firm that owes them $1 billion to go bankrupt?

Apollo and its fellow investors would end up with most if not all of the reorganized AMC's equity. Leon Black of Apollo cut his teeth in this business working with Michael Milken at Drexel, so he understands the distressed debt game.

Even though Apollo is best known as a private equity firm, their first several deals after they formed Apollo were buying distressed debt of broken Drexel deals. They took the equity in bankruptcy and made a fortune as the now de-levered companies prospered.

Mr. Black and his associates are well aware of AMC's potential value if they shed all the debt and dispose of unwanted leases via bankruptcy. The new equity will be worth somewhere between five and 10 times what the company trades for today.

A reorganized AMC would exit the bankruptcy process in a post-COVID-19 world as a thieving business throwing off hundreds of millions of dollars of operating cash flow once again.

And that is exactly what appears to be happening in the company.

How AMC Stock Could Turn Around

CEO Adam Aron has no intention of going quietly into that good night. He is pulling out all the stops and hopes to have the money raised in a few weeks. Aron may sell more stock after Tuesday's bounce. He is also looking to recapitalize its European subsidiary Odeon Cinemas. That alone could raise more than $500 million if it is successful.

If he gets the money to stay open for the rest of the year, it's still going to be a struggle to get back to pre-pandemic levels.

The movie business has lost ground to streaming services since the pandemic began. Warner Brothers will be releasing all its new movies simultaneously on HBO Max and in theaters this year. The movies will be available on the streaming service for 31 days before going to theater-only viewing.

A couple going out to see a new hit movie will be about $20 to $25 for tickets, with another $30 or so spent on drinks or snacks in a theater.

They can watch the movie with a nice dinner and a reasonable bottle of wine with a couple of bucks left over, with streaming services.

AMC is also going to have a lot more debt to deal with than they did at the start of 2020. They already are paying almost $400 million a year in interest expense, and now they will be adding to it with the Mudrick and European borrowings.

Given all of this, the verdict is simple.

Is AMC Stock a Buy?

Given the difficulties the firm faces and the battle with Apollo and other lenders, should we avoid the stock?

No. Of course not.

This is worth a small speculation. It is a long shot of sorts, but if Adam Aron and his team pull off the turnaround and begin paying down debt in 2022, shares of AMC Entertainment will be a ten bagger.

Yes, movies have changed, but there are a lot of people who like going to the theater. So, the industry will change, not die.

Leon Black and his fellow distressed investors know that all too well.

Make it a small bet. It is a long shot, so you have a potential asymmetrical payoff.

If AMC does go bankrupt, we will lose a little bit of money.

However, the filing itself could lead to a new opportunity. There is a chance that new equity securities will be issued in a reorganization. This will allow us to get in alongside Apollo and their partners on reasonable terms.

But you're getting it all for free – no sign-up or credit card required.