It's back to the old drawing board... but I'm happy to do it!

A few months ago, when I published "The Best Way to Beat Bitcoin During the 2021 Crypto Boom," I put it all on the line, stood there on camera in my crypto "war room," and publicly predicted we'd see Bitcoin at $50,000 by the end of the fourth quarter of 2021.

Well, looks like I'll have to revise my prediction upward - significantly - because at this rate, we'll get there by the end of the first quarter of 2021, easy.

It may go a little lower to consolidate (and give a better entry point), but Elon Musk and Tesla's $1.5 billion vote of confidence put the "gas in the tank" to hit $50,000 fast.

But here's the thing. If you only own Bitcoin, you're not getting all the profits available out there.

Not only are there plenty of smaller, outstanding coins to own and trade, but there are great stocks, too. When you look at the big picture, there's an entire industry building up around Bitcoin and crypto.

You don't have to take my word for it - the profits you book on this easy stock trade will prove it...

Make Sure You're Getting Every Cent of Crypto Profits

There's no shortage of ways to make money on the 2021 Bitcoin and cryptocurrency boom.

Now, one way of making money here is to just go out, set up a digital wallet, and buy a Bitcoin. It's straightforward, sure, but I know a lot of folks out there are either unable or unwilling to put $46,000 into a single investment.

I understand completely. The thing is, as long as you have a wallet (I think everyone should have one, because there are plenty of stellar coins out there to buy, hold, and trade), it's really easy to buy fractions of a Bitcoin.

The most important thing is to own some, however much.

REVEALED: There's a unique crypto phenomenon almost nobody is paying attention to. But Tom is watching, and he's discovered double-, even triple-digit moves in a matter of days nearly every time Bitcoin jumps. Take a look...

Own Bitcoin and trade Bitcoin stocks, and you're maximizing your profit potential.

Bitcoin has a $647 billion market cap right now. At that size, there's an entire industry that's been built up around it. There are exchange-traded funds, like the Grayscale Bitcoin Trust ETF (NYSEArca: BTC), and there are plenty of players in the Bitcoin industry that have optionable stocks.

Riot Blockchain Inc. (NASDAQ: RIOT) is a $3.2 billion Bitcoin miner - one of the largest in North America, in fact.

Now, time was, an individual could get set up with a specialized computer processor rig and put it to work crunching the calculations that yield fractions of a Bitcoin - I used to do that myself, years ago.

WORST CASE: You could own one of the best stocks available, possibly at a steep discount. Best case? With the right stakes, you could potentially add thousands of dollars to an account on a near-weekly basis. Find out what this is about...

But as time has gone on, the computing power needed to mine those fractional Bitcoins has grown exponentially, which means usually only corporations have the processing firepower on hand.

The cool thing is Riot is highly correlated with Bitcoin; this makes sense when you remember that Riot's revenue is all in Bitcoin. The company generated 222 bitcoins in the third quarter of 2020 alone, but at current prices, that's a cool $10.2 million.

As impressive as Bitcoin's 2020 performance was, Riot actually blew it out of the water. Hard to believe, but the charts don't lie - its performance was twice that of Bitcoin. 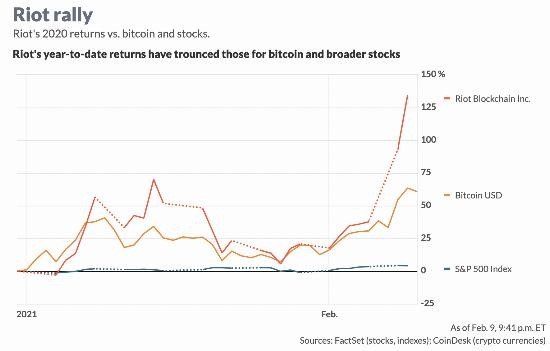 How to Play RIOT and Max Out Your Profit Potential

Now, you can't go wrong owning shares of RIOT - it's trading at just under $50 today. But here's the thing: RIOT is 100% optionable right now.

And you know me... I've got just the trade to make to reduce your risk and juice your profits tenfold.

That's one of the best ways I know to pad your Bitcoin profits during one of the strongest bull runs I've ever witnessed, but it's not the only way.

Like I mentioned a minute ago, I think there are plenty of great coins out there - and I'm not just talking about Ethereum and Litecoin.