Americans have experienced all kinds of well-publicized shortages and disruptions since the pandemic began last year - toilet paper, hand sanitizer, cleaners, even certain foods have all been scarce on shelves at times.

Supply of most of those products recovered by the early summer of 2020, but there's still one critical pandemic shortage that's not only not eased up, but is still getting worse.

I'm talking about semiconductors. They're essential for producing the microchips and integrated circuits that go in pretty much everything electronic we use these days. And thanks to the pandemic, they're in really short supply.

If you're an investor, looking at a company with more demand than it can handle can be a great "problem" to have. In fact, Uncle Sam is getting ready to infuse the entire sector with billions in cash to help solve it. That's the kind of cash that adds digits to share prices.

One company is in a really good position to capitalize on this...

The United States Is a Major Semiconductor Player

Most folks think semiconductors are made in East Asian manufacturing giants like Taiwan and China - and most of them are, but plenty of them are made in the United States, where manufacturers are behind the eight-ball, too, just like everywhere else.

U.S. automakers in particular are having a tough time with the shortage; Ford Motor Co. (NYSE: F) and General Motors Co. (NYSE: GM) announced they're stopping production of certain vehicles due to a lack of semiconductors.

That's prompted Congress to step in to address the strategic shortage.

100% SUCCESS RATE: This strategy helped Tom Gentile put together his best year ever, with 23 wins and ZERO losses since April 2020. Learn how...

But most importantly for investors, Congress is setting aside around $37 billion to throw at the problem, and it's likely that spending will make it through the system. The Democratic majority in Congress sees this as an opportunity to advance President Biden's "Made in America" initiative to "onshore" or "re-shore" U.S. manufacturing capacity. What politician doesn't want bragging rights over job creation?

The end goal here is to level the global playing field for U.S. semiconductor companies while reducing imports of what at the end of the day is an important strategic resource - your coffeemaker uses semiconductors, but so do tanks and fighter planes. While American semiconductor manufacturers take in around 47% of worldwide sales, only around 12% are actually made here in the United States.

Here's the Stock to Buy

Tough to believe, but the $9.7 billion chipmaker turns 52 this year; it helped develop some of the first reliable microchips for the U.S. military during the Vietnam War era. AMD has used those chips over the years to make microprocessors, logic chips, RAM, graphics and sound chips, and a lot more. Most importantly right now, AMD dominates the red-hot, $348 billion PC gaming segment; AMD components appear in some of the most sought-after and powerful gaming computer rigs.

WORST-CASE SCENARIO: You could own a great stock, possibly at a steep discount. The best case? With the right stakes, you could potentially add thousands to an account nearly every week. Take a look at this...

AMD has recently been catching up with some of its competitors, eating up market share. Just this past January, Techradar reported AMD "owns" nearly 51% of the Windows desktop processor market.

I think, with government support aimed at beefing up supply, AMD could do great things. It's going to be high up on the list of the government's "semiconductor manufacturers to hit up this month" list to get production back on track and ease the shortage that's getting tighter by the hour.

The stock itself is handing us a nice, practically irresistible entry point, too. 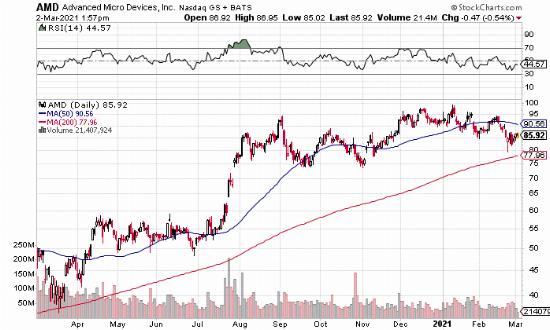 AMD reported great earnings in the second half of 2020, but as you can see on the chart, the stock has become less and less "loved" lately. Selling particularly kicked into gear last week as part of the gigantic rotation out of tech "pandemic stocks" and into "recovery stocks" like financials, energy, and infrastructure. The relative strength index reading is bordering on oversold, which, if the trend continues, gives you a series of better and better entry points.

There's the Potential to Juice Gains

You could buy the stock outright and do very well, but an interesting profit strategy here, if it sits well with your risk tolerance, might be to sell or "write" puts on it. A lot of folks hear the word "put" and automatically think "bearish," but that's only half the picture. You buy puts if you want to cash in when a stock drops, but selling a put is actually bullish.

It's possible to pocket instant cash from the premium, which the seller gets to keep if the buyer doesn't exercise the option. And if you sell puts on a stock you want to own anyway, you're setting yourself up for the chance to own it at a much more favorable price. Who wouldn't want to own a $90 stock for $75?

My colleague (and America's No. 1 pattern trader), Tom Gentile, has put together a presentation on a similar but potentially even better trading strategy - I happen to know that it helped him put together his most successful year yet, with 23 wins and zero losses since April 2020. You've got to see what it's all about.