You're not the only one feeling it – times are strange for investors.

We're enduring a pandemic that's ending, but isn't over yet. A lot of people are vaccinated, but not enough. There are fewer COVID-19 restrictions, but they could come back in a hurry. The economy is recovering, but it's not "there" yet. People are piling into travel, entertainment, and leisure stocks, but those fundamentals haven't improved that much… Weird.

On the other hand, we've got traditionally strong tech stocks acting sluggish, and a relatively wide divergence between the Nasdaq and the Dow… Yikes.

A $1.9 trillion stimulus is about to hit, which should help the recovery, but also runs a clear risk of inflation. That suggests gold should be climbing, but instead, the yellow stuff is falling into a bear market pattern we haven't seen since 1979… Strange.

So, no, it's not just you. These are curious times, but you've got to be in the market to make money; we've all got to dance to the tune that's playing.

The Truth Is We've Been Here Before

Yes, the market does feel strange, but we've experienced similar conditions before, albeit not in a pandemic.

We've seen big divergences across the big indexes before, and in fact, they diverged in 2020; it just didn't seem that odd that they just all finished the year nicely up. More than 43%, 7%, and 16% on the Nasdaq, Dow Jones Industrials, and S&P 500, respectively.

We've seen inflation before, too. In the years after the two world wars and again in the 1970s, inflation reached double digits. 10-year Treasury yields have been creeping up, which is often a harbinger of inflation, but we're still not far from all-time lows, and Fed Chair Jerome Powell just publicly committed to keeping inflation low. Even if he hadn't, it's far from clear we'd even see it in 2020. It's the fear of inflation that's hanging over markets right now, not the real thing. With that said, signs of inflation are presenting themselves more strongly than they have in several years. There's a risk, but it's something to watch for, not a reason to head for the hills.

And that brings us to the price of gold, which is another clue that it's the fear of inflation at work.

Things get more interesting when you factor in the rising dollar. No doubt, we've seen dollar weakness throughout 2020 as the Fed has pulled out all the stops to support the economy and, let's be frank, the stock market. It'd be more shocking if the dollar didn't weaken. But if you look at the chart below, you can see it clearly: In the long term, according to the Invesco DB US Dollar Bullish Index Fund (NYSEArca: UUP), the greenback is actually bullish. 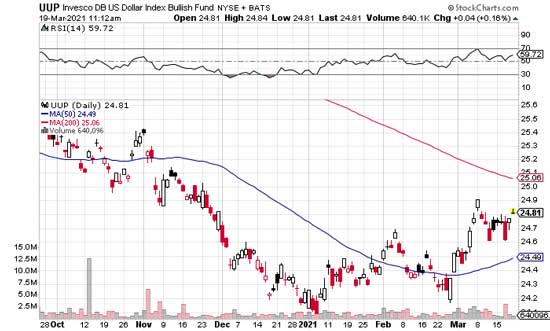 So you have to protect yourself against actual market forces and the fear of market forces right now. That's why today's profit play is a really good hedge, too.

Here's Where the Safe Profits Are

These shares offer a hedge against inflation and the effects of the fear of inflation – that's cool. But chiefly, there's easy, double-digit upside here.

CUTOFF IS TONIGHT: You've got less than a day to register for Tom Gentile's Crypto Wealth Bootcamp, where he'll share some of the strategies that helped him to "5x" his Coinbase account in 2020. Click here to sign up…

Protection and profits are great together, and that's what you get with the Powershares DB Commodity Index Tracking Fund (NYSEArca: DBC). This ETF holds a "basket" of commodities including energy, precious metals, and agriculture products. These commodities it holds are all experiencing strongly rising demand, because there is an economic recovery underway. The rebuild and reinflation economy will continue to drive demand for all of these commodities through 2021. This one-stop ETF gives foundational growth potential to your portfolio.

That it happens to be a great hedge against inflation is really just the cherry on top.

Take a look at this chart. It's a little wider in scope than what you might be used to because I've tweaked it to show us a 600-day moving average, or about 20 months. 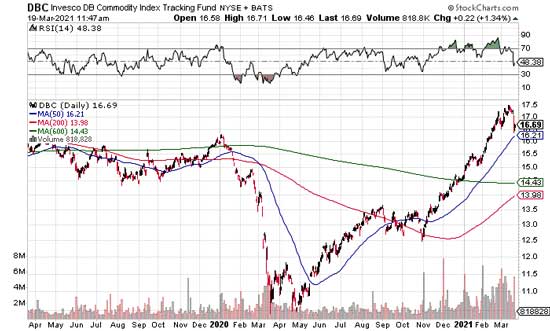 DBC uses commodity-based futures contracts to invest its portfolio, and shares just broke into a long-term bull market trend as they've posted two closes above their 20-month moving average. That 20-month is also rising, which adds to the momentum of this inflation hedge.

Year to date, shares have added more than 14% to their return, more than doubling the S&P 500 and only just behind the 17% gains seen by small-cap-heavy iShares Russell 2000 ETF (NYSEArca: IWM) – its performance is also confirmation that the recovery is the real thing.

So we've got a growth ETF that's strongly keyed into the recovery and that offers protection against inflation. But there's even more going on here! You'd be hard-pressed to find a growth ETF that's performed with as little volatility as the DBC shares. How little? They're trading at about 40% the volatility of the major market index ETFs right now.

Would I own twice the performance of the S&P 500 for half the volatility? All day long. That's the right kind of tradeoff.

Some people are using cryptocurrencies like Bitcoin as a hedge against inflation, but at nearly $60,000, it's definitely one of the hottest profit plays in the market. That's why my friend and colleague Tom Gentile is putting on his first-ever "Crypto Wealth Bootcamp." He's giving everyone the chance to peek inside the same toolkit he used to "5x" his Coinbase account last year. You can click here to register, but he's closing it off at midnight tonight.