It'd be tough to overstate how strong the markets can be in April. The performance is almost always stellar - usually, only December tops it. The S&P 500 is up more than 3.5% this month, and we're only halfway through.

In fact, historically, the markets' highest returns usually pile up from October through April...

There are a lot of theories about why this happens. A really popular one is that Wall Street types flee town and open up their summer houses, though with millions of people still working from home, I'm not sure that adds up.

It doesn't really matter why it happens - it matters that it happens, and I don't think May 2021 will be an exception.

I'm not basing that on some traders' superstitions, either; I'm looking at one very specific number that's telling me the bull market's likely going to take a breather in the next month.

But, I'll tell you up front, I'm not worried about it. These stretches can be really profitable...

One Number Can Tell You a Sell-Off Is Coming

I've said before that, despite the "Robinhood Effect," with huge numbers of aggressive buyers in the market, that the risk of a slump or even correction is elevated. If something - anything - happens to freak out those buyers, or throw cold water on the party, the selling could be just as aggressive.

A classic technical indicator I use is the relative strength index, or, as you'll hear it called, the RSI. The RSI measures momentum - the size of recent price changes, up or down. You can use it for pretty much everything you can buy or sell in a market, particularly stocks and exchange-traded products. And when you're looking at an ETF that tracks the broad market, like the SPDR S&P 500 ETF (NYSEArca: SPY), you can get a good reading of the state of the market.

No need for a calculator, either: You can use a charting program or service, like Stockcharts, which is mostly free, to measure and graph the RSI for you.

Take a look at this chart of SPY at midday on April 15... 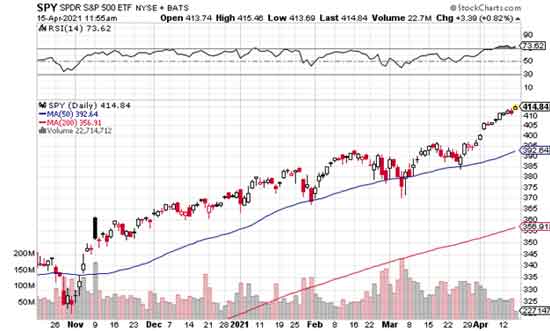 But take a look at the graph above that beautiful chart. Uh-oh! The RSI reading is above 73 right now. That's the highest it's been since August.

These overbought conditions, combined with a softening historical seasonal trend - the tendency of buyers to leave the market at this time of year - is telling me we could see a correction as April comes to an end and May begins. Earnings season is coming up, which could end up supporting the markets, or at least certain big, well-positioned stocks.

But if we see a down Friday followed by a down Monday, that's a sign that overbought conditions are coming to a tipping point. Notice I didn't say "it's the end of the world"; that's not what's going to happen. But we could certainly see the bull market take a minute to catch its breath.

Now let's talk about what to do about all of this; one thing we shouldn't do is rush for the exits.

Here's How to Profit in May

There are a couple of different ways to go about cashing in if they "sell in May and go away."

Above all, you've got to be more selective in your long positions; when the bull market is going all-out, it's easy enough to make money nearly everywhere you look - just like the new retail investing crowd is doing right now. "A rising tide lifts all boats" is another old cliché.

But when markets go down, it naturally gets a little trickier; you can look for stocks that do well in tougher markets - some of the bigger retail names like Target Corp. (NYSE: TGT), Walmart Inc. (NYSE: WMT), or Home Depot Inc. (NYSE: HD) should still do well in a correction, or, at the very worst, drop to more attractive levels.

You can grab shares of an inverse or leveraged inverse ETF that'll return more the lower the market drops, like the ProShares Short S&P 500 ETF (NYSEArca: SH). If you go the leveraged route, like with the ProShares UltraShort S&P 500 ETF (NYSEArca: SDS), you can bank multiple times the markets' drop. Be careful, though, because if the market bounces back - as I think it probably will ultimately - these shares can drop like a hot rock. These are definitely short-term, speculative bets - don't put all your chips there.

A lot of people like to run out and buy puts on the SPY ETF, so they can make money when the index drops. That can be great if you time it correctly, but it can be difficult to consistently rake in the big profits I like doing that.

My favorite strategy is one that can work pretty much every time, no matter what the market's doing: Follow the money. There's always money moving somewhere, and the smart money tends to move first and in the greatest amounts.

That's where my proprietary S.C.A.N. algorithm comes in. It's an algorithm; it doesn't get nervous or swept up in crazy headlines, or suffer from confirmation bias. I can use it to help me identify what I think are the biggest money flows in the market, where I think the smart money could be headed next. When S.C.A.N. shoots me a signal, I let my Project 303 subscribers know I'm seeing green. You can go right here to learn more, including how to join us.