At the risk of making a bad joke, it should be obvious to everyone that sooner, rather than later, fossil fuels are going the way of the dinosaur. I'm not saying we'll be totally "off" oil in 10 or even 20 years, but the writing's on the wall.

It's environmentally unsustainable, sure, but even if you could wave a magic wand and take emissions out of the atmosphere, there's only so much of the stuff under the ground; it's a non-renewable resource.

But all indications are that fossil fuels like coal and crude oil will become economic duds long before they run out. Plenty of research desks at major investment banks have issued notes saying as much. Capitalism doesn't necessarily care that fossil fuels are "dirty," but it does care that renewable, sustainable power is rapidly becoming much cheaper and easier to use than fossil fuels.

You don't have to take my word for it - check out the Dow 30, where there's only one oil company left.

Trends in the market can change all the time, but undoubtedly, long-term economic momentum is with renewable power, battery technology, electric vehicles, and minerals needed to make it all come together.

That's actually one of the reasons why clean energy can be so tough to invest in successfully; it can be a pretty crowded trade sometimes.

Today, I've got a $3 penny stock teed up that makes it much easier, and way more profitable, than throwing darts at a list of clean energy stocks. We know the long-term trend is with us, but the short-term trend is heading our way, too.

This $3.30 Stock Is Nearing the Perfect Entry Point

This is a stock I shared with my Penny Hawk readers recently, and conditions are still just about perfect for the next move higher.

The pick is Neo Lithium Corp. (OTC: NTTHF). It's a Toronto-based lithium exploration and development company working a very hot project in South America's "Lithium Triangle," a region in the arid west Andes Mountains of South America comprising territory in Argentina, Bolivia, and Chile. Resource World estimates as much as 54% of the world's lithium is there in the triangle, waiting to be extracted and put to use in batteries in everything from phones to Teslas. Neo-Lithium is the owner and developer of the "Tres Quebradas" or "3Q" project in northwestern Argentina. Earlier this summer, the company reported that it's producing battery-grade lithium with 99.9% purity at its plant.

That's what the company does, but we're more interested in what the stock itself does. Let's take a look...

The stock recently made a volatility rally after breaking above $2.60. Volatility bands are also accelerating.

That rally basically exhausted short-term buying power while taking the stock into overbought RSI readings. This action, along with a drop in volume, should see the stock begin another rally cycle that will start and pick up steam the closer the stock gets to $3, which would be the ideal entry point. 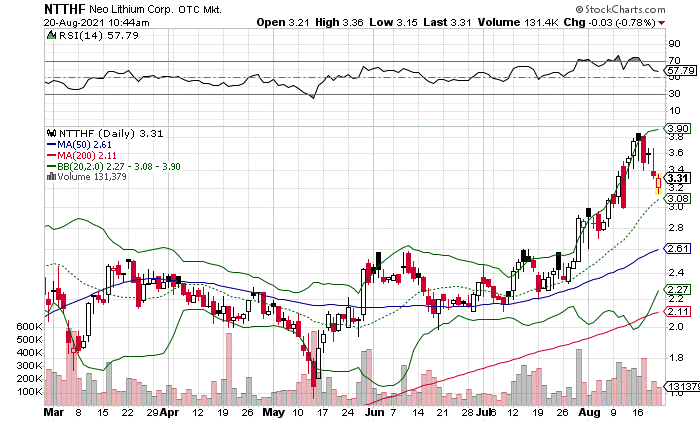 Volume is beginning to grow again, too, which is a plus. Buy this stock when it hits $3, and then buckle up. Once you're buckled, it'd be a good idea to set a 5% trailing stop when the stock hits $3.60

That way, you protect your principle, you lock in some profits, and you're free to chase after bigger profits.

For example, if the stock reaches $5... then drops down to $4.75... the 5% stop-loss kicks in and we profit $1.25 more than if you set a hard stop at $3.60. Because these stocks can be volatile, it's a good idea to be aware of your risk tolerances and use sensible position sizing, too.

This is an almost completely untapped corner of the market - there's at least one Wall Street firm that actually prohibits its brokers from offering these kinds of stocks, even though it's undeniable they can produce some of the biggest potential gains in the market today. Top, exceptional performers have seen 2,953%... 4,801%... 12,754%... even 22,207% in less than a year. My colleague Shah can show you more about them right here....