I watch a lot of penny stocks for my free Penny Hawk e-letter readers. And when I see something that looks profitably promising, I let 'em know.

I've had my eye on one in particular for more than a week now.

For a penny stock, its market cap is on the bigger side, at $864 million, and shares trade for just $8. It builds materials designed to boost Internet speeds and beef up the amount of traffic the lines can carry.

The stock itself is showing me an absolutely beautiful technical setup that I think points to predictable profits - with a high likelihood of a much bigger breakout before long.

This Is a Fantastic, High-Profit Setup

The stock I'm talking about is Lightwave Logic Inc. (OTC: LWLG), based out of Englewood, Colorado.

Shares had moved above their 50-day moving average, but then fell down below their lower Bollinger band.

It seemed like LWLG would go as low as $4... until an interesting technical move happened: That $4 level seemed tasty to investors, and it drew volume from the market, and the stock regained support.

Which means right now we have a prime opportunity to move into this stock and make a predictable profit and, like I said a minute ago, the shot at a much larger breakout.

Bouncing back from that $4 support level, shares are now breaking above their 20-day moving average. 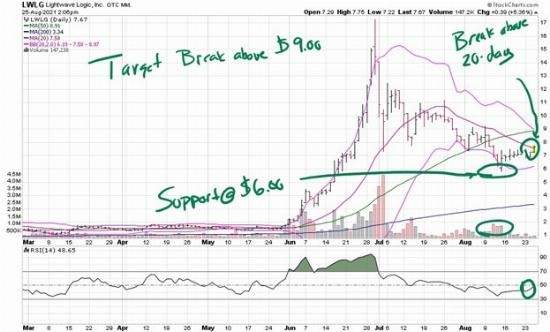 But if it breaks above its 50-day moving average at $8.91, this will mean that the stock could break above its top Bollinger band.

The stock is looking tasty again, for sure; the charts and data are drawing in more buyers, and today, before the market closes, you want to be in position to profit.

Now, this is a penny stock - one that's moved quite a lot recently, as these stocks will do - but my secret weapon for raking it in (and keeping it) on small, volatile stocks, is the trailing stop. It's so easy to use that I can't imagine why everyone doesn't use them. It's a stop that moves with the stock, making it a cinch to protect your principle as you capture profits.

Here's what to do.

Buy LWLG shares at market, and immediately enter a 7% trailing stop - I'm talking as soon as you open the position. This'll protect you in case the stock fails to punch through that 20-day moving average, which could result in a re-test of the $6 level.

As incredible as this profit potential is, it can often be even cheaper...

These kinds of stocks - $8, 5$, $2, and even less - are an almost completely untapped corner of the market; they're practically blacklisted. In fact, I know one Wall Street firm that actually prohibits its brokers from offering these to clients. Can you believe it? This is despite the fact that these cheap stocks are producing some of the biggest gains in the market - exceptional performers have seen 2,953%... 4,801%... 12,754%... even 22,207% in less than a year. You've got to see this interview my colleague Shah Gilani did talking about the extreme profit potential in this class of stocks - you can do that here.

When I tried to place the trailing stop, I was given the message "Non-equity, bulletin board, pink sheet and other specific securities are not eligible for the type of order you have specified." Is this just an ETrade thing? It must be possible if it's part of the recommendation.