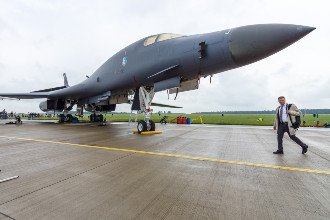 When it comes to defense stocks, the U.S. government is the cash cow. It's been that way for more than 240 years. This longstanding relationship adds stability and, in turn, predictability when it comes to projecting the growth of these companies.

The U.S. government is one of, if not the, best customer to have. Hundreds of billions of dollars each year are spent, with almost no chance of missing a bill. Look back at 2020 - the United States spent $725 billion on national defense alone.

While most defense companies offer a variety of products and services, not all of them make for good investments. Some are just plain overvalued. And with tensions between China and Taiwan on the rise, it's worth considering which are the best defense stocks of the bunch.

If you're unsure about the China-Taiwan tensions, here's a quick rundown: Taiwan views itself as an independent state; China believes there is "one China" and is willing to use force to make that so. Between talks of "accidental misfires" and China flying 38 military jets into Taiwan's airspace, this tension could be inching toward a conflict.

That means defense stocks don't just offer predictable returns, but they could grow in a hurry as global tensions heat up.

Here are our three best defense stocks to buy now...

Leidos Holdings Inc. (NYSE: LDOS) is one of the top defense tech companies and the largest provider of outsourced IT services for the Pentagon and civil agencies. It also works within highly classified sectors like spy agencies.

But Leidos has grown to be much more than that. It's now one of the leading companies when it comes to futuristic defense tech.

Back in 2019, the U.S. Navy had an autonomous breakthrough. The Navy sailed a Leidos-designed ship from San Diego to Hawaii and back with almost no outside help. Drones might get most of the attention now, but autonomous operations are key to the Navy's growth. They offer the potential for the fleet to expand without new personnel costs.

Leidos also added to its high-tech hardware business last year. The company spent $1.7 billion to acquire the research company Dynetics. The company focuses on intelligence, aviation, and space. Dynetics contracts include serving as the lead contractor on DARPA's "Gremlins" project, which drops unmanned vehicles from a plane then retrieves them.

Leidos has outperformed the S&P 500 over the past five years - and continues to do so today. Leidos hit a company record for revenue in the last quarter. Not only that, but the company reported its 14th consecutive quarter of backlog growth, which now stands at $33.5 billion. That means that Leidos has a workload that far exceeds production capacity. That's a great problem to have.

Trading at just under $100 a share, you'll have a hard time finding a better entry point.

When you think law enforcement, you might not associate that with growth. Yet Axon Enterprise Inc. (NASDAQ: AXON) has become a high-growth stock in the defense and law enforcement industry. Axon's share price increased an incredible 554%, and revenue is up by 233%, all in just five years.

And this company is only just getting started.

But tasers and body cameras are only part of it...

The company's records service, Axom Records, hopes to digitize and automate law enforcement records, including video, transcripts, and ID scanning. The higher ups estimate this as a $2 billion opportunity. Add in the potential to integrate the dispatch process with Axon, along with virtual and augmented reality training efforts for law enforcement, and there's another $4 billion.

All said, there's another $6 billion in TAM ripe for Axon's taking.

These products all tie into Axon's systems for evidence capture and management. The more products that seamlessly integrate, the more value Axon has. And in turn, it improves the company's revenue from each customer.

As an industry leader within the defense and law enforcement industry, Axon is a great stock to own over the long haul.

Lockheed Martin Corp. (NYSE: LMT) is an aerospace and defense company that sells billions of dollars' worth of products and services to the U.S. government each year. In fact, those sales account for roughly 75% of the company's revenue. It's all part of a longstanding partnership.

Back in the early 1900s, its founder, Glenn Martin, worked and sold airplanes to the U.S. Army. Those ties with the government continue to run deep. And because there is ongoing geopolitical tension, particularly now, the United States turns to Lockheed Martin to upgrade and update aircraft, weapons systems, satellites, and more.

But to generate sales, Lockheed Martin needs contracts - often these contracts are multi-year projects. As of the second quarter in 2021, its backlog is worth $141 billion. Even though that's down from $147 billion late in 2020, it's still higher than it was in 2018.

It's important to remember that the backlog grows over the long term. A company with a backlog that trends higher over time tends to have more revenue growth. Lockheed Martin is no exception.

Over the past five years, the company's revenue has grown roughly 7%, projecting for $68 billion in sales for 2021. And the Lockheed Martin management buys back shares of its stock to help grow earnings per share (EPS). In five years, the company's EPS has grown 16% per year. And the number of outstanding shares fell from 303 million to 279 million.

The company also has a strong track record of paying dividends to shareholders. Lockheed Martin pays a quarterly dividend that totals $11.20 per year with a dividend yield of 3.22%. And the dividend has been raised 19 years in a row - the payout has grown 13.4% per year over a decade.

That means, with Lockheed Martin, you get the best of both worlds: strong share price growth and a solid dividend.

But we have one more opportunity for you.

It's a solid, long-term hold that you don't want to miss out on.