Rivian's IPO was the biggest of the year and immediately made the EV maker a household name. But does it belong in your portfolio? Our Rivian stock forecast will give you the details so you can make a hype-free decision... 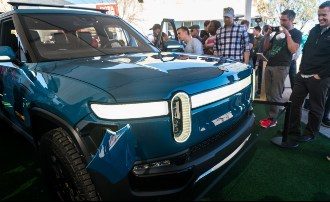 Rivian stock hit the market on Wednesday in what was the biggest IPO since 2014 and the sixth largest IPO ever.

Rivian Automotive Inc. (NASDAQ: RIVN) started trading on the Nasdaq stock exchange with an expected opening share price between $72 and $74, but it blew expectations out the gate at $107 per share.

Despite only producing about 15 vehicles a week, Rivian is now valued more than GM and Ford. Rivian's current market cap is an incredible $140 billion, nearly double Ford's market cap of $79 billion.

While electric vehicles are the future, how much higher can Rivian go?

Let's take a look at whether the $140 billion EV startup is a buy in our Rivian stock forecast...

It's hard not to pay attention when a company makes such an entrance to the market like Rivian.

To put its post-IPO valuation into perspective, when Tesla went public in 2010, it was valued at less than $2 billion.

Sure, you can say the desire for EVs wasn't as strong, government mandates like the Biden administration's zero emissions by 2035 plan didn't exist, and that all plays into the lower valuation.

It's also easy to look at the numbers from week one and compare it to other monster IPOs like Facebook and Alibaba. Early investments in both of those stocks paid off handsomely for investors. That's why there's so much demand for promising new stocks like Rivian.

Plus, Rivian has some pretty big backers, making it a more credible play than other upstarts like Workhorse Group Inc. (NASDAQ: WKHS) or Lordstown Motors Corp. (NASDAQ: RIDE).

Amazon.com Inc. (NASDAQ: AMZN) currently owns over 20% of RIVN, and the retail king has already ordered over 100,000 electric vans, which it plans to have on the roads for last-mile deliveries by 2030.

It purchased an additional $200 million worth of its stock to bring its stake in the company over $17 billion. That's a total of 158 million shares.

Ford owns about 12% of the company through investments that started back in 2019. According to public documents, it now owns roughly 102 million shares worth about $10.3 billion.

Meanwhile, T. Rowe Price owns 133.7 million shares of RIVN, good for 18.8% of the company, making it the second largest stakeholder in the EV start up.

To put that into perspective, Rivian sold 153 million public shares in its IPO.

Retail investors are joining some pretty elite companies. But they're also paying a big premium above what Ford, Amazon, and T. Rowe Price paid to invest in the company. That means retail investors need the Rivian stock price to soar from here, while the big early investors are already seeing a profit.

Can Rivian Live Up to the Hype?

Rivian is the most expensive pre-revenue electric vehicle company in the world.

Its market valuation at the time of the IPO was about $77 billion. But shares surged since last week and hit a record high of $135 per share.

With that soaring share price, the EV startup hit a market cap of $110 billion. That's more than Ford and GM, and good for the fifth largest automaker by market cap in the world.

Naturally, RIVN is drawing comparisons to Tesla, which went public in 2010.

But there are some key differences.

Tesla's initial market cap was about $2 billion, and it didn't reach $90 billion until 2020. This year, it surpassed the $1 trillion mark, making it the biggest automaker by market cap in the world.

It took Tesla 11 years to grow and climb up the ladder of automakers to dominance. It's currently dominating the EV market, and this year alone, it has sold around 627,300 vehicles.

That's 627,300 vehicles more than Rivian has sold. Although it has pre-sales to hang on to, those are more of a small down payment to secure your place in line for when the company is finally able to release its first generation of cars.

Keep in mind, a company chooses when to go public, and it's usually because it needs capital. In this case, it definitely needs capital for production costs in order to meet market demand.

The comparison to Tesla isn't fair at this point. Rivian still has a lot to prove that Tesla already has.

But with a market cap already well above Ford's and GM's, how much higher can Rivian shares go?

Not much higher. At least not right now. In fact, a pullback is likely in order.

Money Morning Chief Investment Strategist Shah Gilani says, "you don't have to jump into the stock right away - this is a long story."

Shah is warning investors about the overvaluation of the stock. He recommends staying away from it until it levels out.

If you were able to get in at the pre-IPO price, it's a great "flip and buy the dip" opportunity.

Otherwise, it's better to let it cool off and wait for the inevitable dip most IPOs experience.

He doesn't deny the company has a bright future and will probably be a good investment. But don't overpay for it now. Right now, the stock is priced as though Rivian will execute perfectly and will grow into its valuation. That's a recipe for disappointment.

Shah says patient investors will have another chance to buy in at a much more reasonable price later on, so stay tuned.

Remember, this pre-IPO price of this stock was closer to $57. That's what Wall Street underwriters were willing to back it at, and then the mania of the market swept it higher. We're thinking closer to the IPO price is more reasonable entry for this stock now.

In the meantime, Shah does have an EV play that is a real ground-floor opportunity.

Check it out below...

This Is the Real EV Ground-Floor Stock