We're almost to the official start of the holiday shopping season, and it's shaping up to be a big spending year. That's why we're bringing you the best retail stocks to buy ahead of the 2021 shopping frenzy. 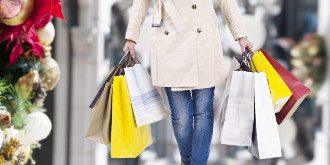 You see, this is quietly shaping up to be an explosive opportunity. Bearish pundits are taking to TV to warn investors that inflation and supply chain backlogs will weigh on this year's holiday shopping. But that's not the reality, and it's an opportunity investors can exploit by owning the right stocks right now.

The National Retail Federation expects over 2 million more Black Friday shoppers than last year. That will be a holiday shopping record.

The economy continues adding jobs each month. Unemployment claims just hit a pandemic-era low this week. The economy is in good shape and most are expecting a holiday retail bounce-back in 2021. Retail CEOs have used last quarter's earnings calls to assure investors their shelves will be fully stocked for the 2021 rush. Target CEO Brian Cornell assured investors his stores shelves will be full this year.

That's telling us retail sales could beat expectations this year.

So this year, we sought advice from our Volatility Specialist, Mark Sebastian, to pinpoint which Black Friday stocks will gain the most.

Mark has done the research and ran the numbers, and he has three stocks that will give your portfolio a boost this holiday season.

The Best Black Friday Stocks to Buy in 2021

Target's had a rough couple of weeks, dropping 7.8%.

That won't last. It's been quietly stacking its inventory to stay ahead of the global supply chain backup.

In fact, it's inventory in Q3 increased over $2 billion compared to last year. Target CEO Brian Cornell let the world know they're prepared, saying, "We have been planning all year for this."

To be fair, it was already two steps ahead, and given the state of the global shipping situation, Target is pulling out all the stops.

Built to navigate these uncertain waters with favorable port access and long-term shipping agreements, it will also benefit from smaller companies without such positions.

Given the current shipping circumstances, it took extra precautions this year and chartered its own container ships to bring merchandise from overseas. This way, it can not only guarantee inventory, but avoid delays from additional stops and backed-up ports.

It should also see an influx of in-store purchases compared to last year that will help strengthen margins. Q3 same-store sales are already up 12.7%.

Although its shares have been sliding the last couple weeks, Mark doesn't think that's cause for concern. In fact, he thinks it's a sign of Target's preparation.

"Look - the retailer has great earnings and great margins. It simply said that it has plans to spend more money to make sure it has enough inventory for Christmas. That's a good thing..." Mark says.

He's not all too concerned about the stock's recent dip.

He abides by his rule, "...when a stock gets bashed so badly over something so small, where the market has completely misread the situation, it's an opportunity to buy."

With limited family parties, no office parties, and really no seasonal parties in general, it missed out on gift purchases.

Mark thinks this year is shaping up to be even bigger for makeup companies like Ulta. As if it were foreshadowing, last week, Ulta stock broke $400 for the first time since mid-October.

Mark anticipates more out of it, saying, "from here, it's only going higher- especially as we head into the 'official' holiday season. Buy this one, even a fractional position if you have to."

You can still buy in at a discount.

In the last reported quarter, Ulta recorded earnings of $4.56 per share, compared to Zach's Consensus Estimate of $2.49 per share. That's an 83.13% overperformance.

If you're debating buying into Target or Ulta at this point, you might as well buy into both.

In August, Ulta Beauty sent its products to more than 100 Target stores and on the mega-retailer's website with plans to reach more than 800 stores in the next few years.

Imagine a department store make-up experience, but with an exclusive supplier in a retail giant that is expecting an increase in foot traffic of holiday shoppers preparing for upcoming semi-public gatherings.

Best Buy shares are trading at a "discount" buy right now despite being up 19% on the year.

In fact, BBY has a record of this movement, and it's been historically good for shareholders.

According to a CNBC analysis of Kensho, a hedge fund trading tool, BBY has shown a similar pattern 10 times in the last decade, and a bullish trend in shares always follows.

The National Retail Federation forecasts sales during November and December will grow 3.8% to 4.2% over last year.

Its current sales projection lands somewhere between $51 and $52 billion.

As the retailer approaches the holiday spending season with some of the strongest demand momentum in the business, that projection may not be far off.

While it might be hard to top 2020 numbers, it should still hit almost double pre-pandemic numbers and ride the wave of spending this holiday season.

Mark sees this trend holding true across the board, saying "the retail sector, led by stocks like this, is set to finish 2021 with a bang, and I think every investor is going to want to be along for the ride."