Just a few days ago, I was in touch with an urgent buy - and a bonus trade - in the best gold penny stock going right now.

Well, I hope you've got room for an extra couple of helpings of cash, because my F.A.S.T. SCAN system isolated three more penny stocks primed for big moves up.

I'm going to name the tickers and give the setups, but first, we're going to look at two ways to handle these "penny rockets" to get maximum upside out of each one...

The truth is I've got 10 hard and fast "commandments" for penny stocks, but I think it makes the most sense to share these two with everyone right now.

SET ENTRY AND EXIT RULES: Discipline is paramount when it comes to trading penny stocks. These names move a lot faster than your typical New York Stock Exchange ones.

On large-cap stocks like Nvidia, Apple, and Alibaba, there's a lot of news every week. There are things you can see coming miles down the road, be they announcements, earnings reports, or analyst calls.

With more information, there are slower moves. Nvidia isn't going to move 70% in a single day. It has the Law of Big Numbers working against it.

On the flip side, when you take virtually unknown penny stocks, there's a lot less "G-2" available. You don't get the same kind of intel. You won't see an earnings report or an analyst call blasted on CNBC headlines about one of these over-the-counter (OTC) names.

And with less information, there are faster moves. Penny stocks operate under the Law of Small Numbers, and with that comes more emotion.

Emotions and investing are inseparable, especially when you're trading penny stocks and watching your money rise and fall at a much faster pace. If you want to maximize your profit potential, then you have to train yourself to manage them together. The heat of the moment can lead to mistakes if you don't have a predetermined plan.

That's why it's incredibly important to set entry and exit prices before a trade is opened. And stick to them.

How? Use stop-limit orders to enter trades. Don't buy a stock until it reaches a specified price, and you'll never pay too much. Set tight trailing stops as a way to minimize losses and guarantee gains.

That way you keep emotion out of it - and money in it. Think about it: Your investment is climbing up higher and higher. You told yourself you'd get out at 100%, but you want more - and you abandon your exit strategy right before the stock tanks, putting you right back where you started.

That's exactly what you're trying to avoid.

We're targeting specific, consistent gains. And we're doing it with specific entry and exit rules. And good thing, too, because there's almost always lots of action...

VOLATILITY IS YOUR BEST FRIEND: To make money on low-dollar stocks, you need them to move. That means you need volatility.

And penny stocks are some of the most volatile names out there. But it doesn't help to get in on a stock while it's jumping around.

You want to watch for the "calm before the storm" - and take advantage of it. Rising volume levels tend to indicate volatile waves ahead. And those waves drive prices higher - fast. How do you find the calm before the storm? With something called Bollinger Band Width, which you can see on the bottom of this FORW chart. 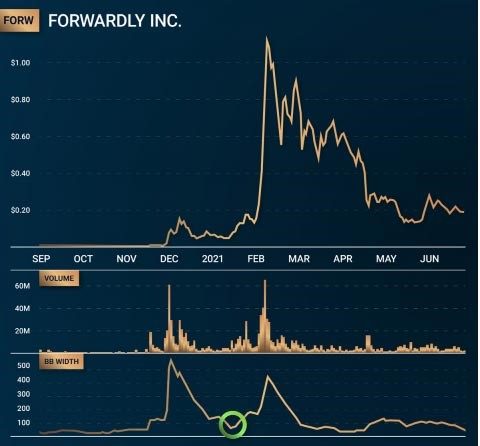 I like to call this the volatility band. See those spikes? That's volatility. When the band is moving up, volatility is high. If, however, the band is low, that's when I'm paying attention.

If the volatility band is low, but volume is rising - that's the calm before the storm. Rising volume + Low volatility = The time to get in.

Listen to what stocks are telling you. That's how you take advantage of volatility. To ride the trend to profits, you need to be there ahead of the waves of other investors looking to get in.

With all of this said, I've done the legwork for you and my Money Morning LIVE viewers to develop these three fast-moving picks.

Now, these three stocks don't necessarily have anything in common, other than the fact that they each hit my proprietary criteria recently. Notice the volume activity and Bollinger band width on each of the following three charts...

First up is Florida-based Iqstel Inc. (OTC: IQST), a jack-of-all-trades company working in telecommunications, electric vehicles, fintech, the "Internet of Things," and blockchain technology. It's tiny, with a market cap below $80 million and a share price of less than $0.60 right now. 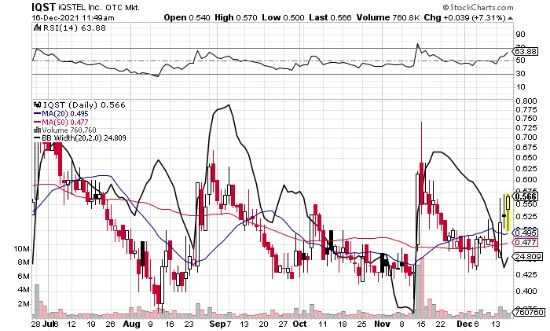 Oculus VisionTech Inc. (OTC: OVTZ) is a $66 million Canadian firm based in Vancouver. It's a development-stage tech company focused on protection - document protection, to be precise - something that can be underestimated in this day and age. OVTZ shares are the "priciest" of the three we're looking at today, though they trade at just under $0.75. 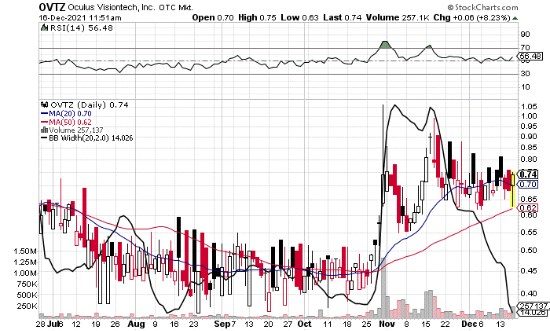 Last and, well, least in terms of market capitalization, is ILUS International Inc. (OTC: ILUS), an M&A investment firm out of New York City but operating worldwide. It acquires other operations in the tech sector, engineering, and the manufacturing sector. Its market cap is "micro-micro," at just under $3 million, and its shares are trading over the counter at $0.40 each right now. 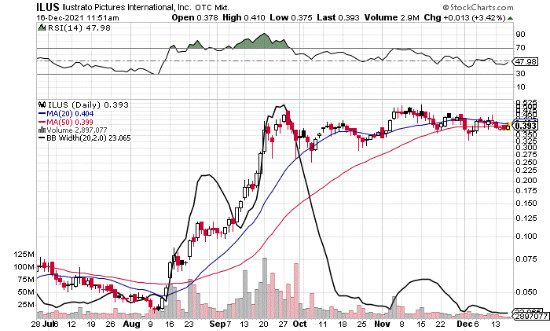 My recommendation for each of these three is... BUY.

I love these three stocks, and there's plenty more where these came from. My F.A.S.T. SCAN system hits me up every time it comes across a penny stock with real fundamentals worthy of our attention - it's looking for things like massive cash flow, 30%-plus quarterly revenue growth, "smart money," and a few other signs a company's tiny stock has big profit potential. I'll show you exactly how it works here - the annual end-of-year tax-selling frenzy is usually when I find the biggest winners.