When U.S. President Joe Biden was elected to office, he made a promise that major changes would be made to benefit the environment.

And this factors into a bullish EVgo stock price prediction today. Here's how EVgo (NASDAQ: EVGO) could pop 97% sooner than later. 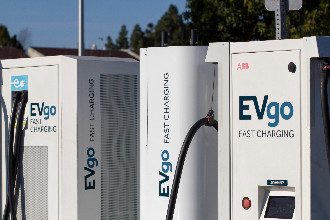 Among other plans, the Biden administration set a goal that electric cars and trucks would account for 50% (originally 100%, but since revised) of the vehicles sold in the United States by 2030.

In order to make this a realistic and functional change, the Biden administration has a major infrastructure plan set in place to help EVs navigate the roads efficiently.

This creates a major opportunity for EVgo stock.

Let's take a look at the EV charging business and how these changes are going to drive its growth.

Then we'll show you why EVgo could be one of the top stocks to buy now.

Why EVgo Charging Stations Are Different

You could argue building EV charging stations across the country is the most important part of Biden's "Electric by 2030" initiative.

Without convenient and available charging stations, the plan won't be functional, and it will fail.

With the infrastructure plan, EV charging stations will be installed across all major roads and highways, in parking lots of major retail shops, and even at large office buildings and corporate campuses.

It's true, EVgo isn't one of the higher profile charging station companies. In fact, it's biggest rival currently boasts 70% market share. However, that number isn't all telling.

EVgo's charging stations are (literally) at a different level than most of its competitors.

EVgo is the largest operator of DC fast charging (DCFC) stations, and it's positioned to be ahead of the market as the demand for faster charging heightens.

With a superior product established, the company has secured a handful of big-time partnerships and is well positioned to grow substantially.

EVgo Partnerships a Network for the Future

While it already has the largest supply of DCFC charging stations in the United States, its network of partnerships will be the real driver of growth over the next three to five years.

One partnership in particular is estimated to triple the size of its charging network by 2025.

When General Motors Co. (NYSE: GM) teamed up with EVgo, its target was set at 2,700 charging stations. The plan has since been revised to include more than 3,250 DCFCs, reaching 52 metropolitan markets.

The company is also offering Tesla connectors at some stations. Tesla currently has its own fleet of charging stations. However, as the market shifts toward companies like EVgo, it's seeing the advantage of teaming up for the convenience of the consumer.

As the company expands its national and corporate footprint, it teamed up with mega rideshare company, Uber Inc. (NASDAQ: UBER), to give drivers on the platform discounts and benefits for using EVgo.

According to a survey, Uber drivers charge multiple times a day. In fact, 47% of drivers drive more than 800 miles each week, and they rely on fast charging in convenient locations in busy urban areas.

Its most dense active stations are scattered up and down the West coast and East coast, and it's working to fill the space between. The point is, this is still a young company with a ton of growth potential.

In only 34 states, the EV market is set to explode over the next five to ten years.

Many experts agree that a smaller player like EVgo will benefit from this long-term growth.

While many investors are on the sidelines, waiting to see who leads the EV charging industry, companies like EVgo with the sole focus on expanding charging station operations will quietly rise to the front.

While securing major partnerships, the company has also been diligent in improving its customer base. It's managed to almost triple new customers year over year.

While EVgo has a ton of growth potential, there is still concern that it's a smaller company compared to some of its competitors. However, that could be a good thing for investors.

The stock got a boost last month when JP Morgan came out with a price target of $20 for EVgo. That's a 97% gain from where the stock is priced now.

The firm noted, "We see a compelling use case for fast charging, especially in the retail and fleet segments where the company has strong and growing partnerships, and we expect the company to benefit from the rapid growth of the overall EV market over the mid- and long-term."

CNN Money is bullish on EVGO's 12 month forecast, shooting as high as $22 by the end of the year, with a low of $11 investment.com has the same forecast, and both sites marked the stock as a "buy."

Nasdaq is a little more bearish on the EV charging company, giving it a high/low of $18/$11 by the end of the year.