There's a massive shift happening in the financial services market - and the time is right for investors to cash in. 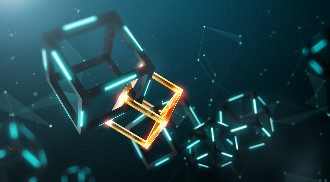 "Visa: It's Everywhere You Want to Be" is a tagline most of us remember hearing at previous Olympic Games. This year, the company's singing a different tune.

A shift like that is bigger than it seems at first - and telling of what's to come in finance.

Traditional banking is slow and insecure, far, far behind the cutting edge. Even in 2022, a transaction that seems speedy on the surface can take up to two weeks to actually, finally settle - and there are opportunities for crooks to strike at nearly every point in the long process.

Like I said, that's great news for consumers, but the real opportunity here is for investors: I'm talking about long-term wealth. Blockchain stocks are a fantastic way to gain extra exposure to the surging asset class that is cryptocurrency.

We think every investor should be into the blockchain - and these are the best stocks to do that with.

What Everyone Should Know About the Blockchain

Blockchain is a way of tracking transactions across multiple computers and assets. Most people use it to describe the technology that powers cryptocurrencies like Bitcoin and Ethereum, but that's not its primary purpose.

The technology existed long before the concept of cryptocurrencies. Initially, its purpose was to help companies and governments manage records and documents, meaning there are many potential applications of blockchain technology that don't involve money at all.

For example, it could track assets, including physical objects - everything from cans of Coke to shoes to entire houses - purchased or sold.

The blockchain could eliminate most, if not all, of those costs and steps - you and your counterparty can instantly and indelibly log the homebuying transaction on the ledger, and even work out financing, with just the two of you.

Or it could be used to record when content is purchased online. It's so valuable that Nike and Microsoft are both developing ways to use blockchain technology to improve their products and services.

This tech is also popular with experts and traders because it's a ledger - it can keep a record of transactions without the need for third-party authentic things. To do this, networks of thousands or even millions of computers run specialized software that monitors the movements of money and assets, building trust in the system even as they power it.

Countless trillions of dollars in goods and services change hands worldwide every day, day in day out. There's baked-in demand for blockchain technology that can make these large and small transactions quicker, cheaper, and more secure.

As I mentioned earlier, it's likely the blockchain will disrupt more and more of the $22.5 trillion global financial services industry, and banks, payment processors, and credit card companies will have no choice but to try and keep up or fade into irrelevance.

And as this disruptive technology goes big-time, these stocks will make a big difference to your financial future.

Nvidia Corp. (NASDAQ: NVDA) is well-known for its GPUs, which power the gaming experiences in hit titles like the World of Warcraft series, the StarCraft series, and countless others. Today, its top-end GPUs sell for as much as $10,000.

That's why it's helpful to think of Nvidia as a "pick and shovel" blockchain play. See, crypto miners use chains upon chains of Nvidia GPUs to provide the processing power needed to mine and verify "proof-of-work" coins like Bitcoin. (This is also why their GPUs are in chronically short supply). While NVDA shares are insulated from the ups and downs of crypto, they're exposed to the upside in the blockchain-powered expansion of crypto mining.

Nvidia stock has exploded by over 200% over the past five years, but we still believe its biggest gains are ahead; it's a strong buy. Based on its history of growth and the bright future of blockchain tech, this stock is an excellent choice for your portfolio.

Block Inc. (NYSE: SQ) used to be known as "Square," and the company is now home to multiple software platforms that use blockchain technology. Block is most known for its use by countless small businesses; it gives payment processing ability to people who would never have had access to it before. Its mission is to make sending money easy, safe, and fun for everyone - familiar territory for blockchain technology.

Block is a dominant player in the U.S. market for stored value cards, and it has since extended its offerings to include payments, a mobile payments app, and real-time value transfer. In addition, consumers can make secure payments with their mobile phones.

The company has strong leadership and is profitable, with its latest report showing 76.27% year-over-year revenue growth. We're predicting explosive growth in its future. Based on its cadence so far, a five-year investment in this stock could earn you around 345.08%.

The experts at Money Morning Live are sharing daily stock picks and trading recommendations that are giving their viewers a shot at serious gains. Just the other day, Garrett Baldwin's fans had the chance to book more than 206% on an SBLK option.

You can find great cryptocurrency and NFT recommendations there, too, from expert Nick Black. You can click here to see what's happening on Money Morning LIVE right now - and start getting the chance to cash in.