When it comes to Web3, this next iteration of the internet includes NFTs, DeFi, and the metaverse; they're all parts of crypto trends that are on the rise. Since Web3 is an outgrowth of blockchain technology, there are many different cryptos to invest in Web3. 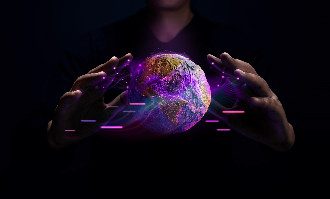 Web3, at its core, is an offshoot of blockchain tech. And with blockchains, services are decentralized. The idea is to apply this decentralization to the web and subsequent apps so that the people have control over their data, online identity, security, and transactions.

Web3 might not take Big Tech out of the equation, but it will bring about alternatives that will create markets worth trillions of dollars.

There are different entry points into the Web3 market - entry points that can be difficult to find when it's so early in its development. That's why last week we covered stocks to invest in Web3.

Stocks aside, many Web3 projects are tied to cryptocurrencies - anyone can buy digital tokens.

That means some of the best opportunities are in the expansive world of cryptos, which is no surprise knowing how essential blockchain tech is for cryptos.

So today, let's look at five cryptos to invest in Web3...

Crypto to Invest in Web3, No. 5: Ocean Protocol (OCEAN)

When it comes to tokenization, Ocean Protocol (OCEAN) is one of the best platforms around. Ocean uses blockchain tech to turn data into NFTs. You can use it to control access and monetize your data to create "datatokens."

Ocean uses these datatokens to gate off access to any data you choose. When you want to share data, you simply give the tokens to the user of your choosing so they can redeem access to the information. It's a simple and effective way to share potentially sensitive or essential information.

The idea behind Ocean is to facilitate data exchange and link users who need data or can't properly store it. The system lets people turn data into tokens available to buy on the Ocean Market in exchange for those datatokens mentioned above.

But the original data remains with the original creator; this could be huge for scientists, researchers, and data analysts.

Ocean is an excellent example of users having more control over their data. And OCEAN token holders can stake their tokens on datasets, entitling them to a share of the NFT transaction fees.

Axie Infinity (AXS) is an online blockchain-based game inspired by Nintendo's long-popular Pokémon series. Players can buy collectible NFT avatars (Axies) to partake in a variety of games accessible through the Axie platform.

The game itself runs on the Ethereum blockchain but utilizes the sidechain Ronin to minimize fees and transaction delays. The focus is on turn-based combat against either computer-controlled teams or real-time players.

Some of the key "play-to-earn" elements that land users more AXIE tokens aside from pitting creatures against each other are breeding and selling creatures on the game's marketplace.

There is a virtual real estate aspect to Axie, but it's not yet implemented. That hasn't curbed its demand, though. In fact, a single plot of land sold for $2.48 million back in November 2021.

But the AXS token isn't just used for governance; it can also be moved outside the game to be traded on a variety of exchanges.

Axie Infinity has raked in $1.3 billion for revenue and generated $4 billion in transactional volume over the past year. Some players in Venezuela and the Philippines have managed to support their families from the game.

Crypto to Invest in Web3, No. 3: Braintrust (BTRST)

In a nutshell, Braintrust (BTRST) is like a decentralized version of LinkedIn. It's a community-run system that acts as a medium to connect companies with workers.

Unlike mainstream platforms that connect freelancers with companies, Braintrust charges nothing from the jobseekers; the fee for companies is low. This is because they give users control instead of having any centralized authority in the arrangement.

Its platform is starting to gain some traction with heavy hitters like Nike and Goldman Sachs.

A decentralized autonomous organization (DAO) uses the BTRST token to govern the system. Another way members can earn BTRST tokens is by inviting freelancers or employers to the network or completing peer-to-peer vetting.

Braintrust claims that job seekers do not have to pay any commission on their earnings. For employers, 10% is charged as a fee to network nodes.

Members can redeem tokens for perks such as free software, discounted products, career services, or traded on Coinbase for U.S. dollars.

Polygon (MATIC) is a platform on which Web3 developers will build their solutions. It's a Layer 2 crypto that aims to provide faster transactions at lower costs for users.

Polygon's network acts as an efficient parallel blockchain that runs alongside the main Ethereum blockchain. That makes it capable of being used for many applications - from NFTs to gaming to the ever-expanding DeFi ecosystem.

However, its growing popularity adds many transactions to the Ethereum blockchain. As a result, transaction fees can sometimes rise to make small or frequent investments that can be too expensive to justify.

In fact, Web3 developers are already using MATIC. Even some major companies like Adidas and Prada use it to experiment with NFTs.

Polkadot (DOT) already has a reputation as one of the top cryptos (the 12th-largest by market cap) and is a favorite of Money Morning Alternative Asset Specialist Nick Black.

Not only is DOT a Web3 crypto, but it's also the crown project of the Web3 Foundation, a non-profit organization. Fun fact: Gavin Wood, the founder of Polkadot, also coined "Web3."

And when it comes to Polkadot's main goal, the network aims to serve as the foundation of a decentralized web - which is the definition of Web3. With this pedigree, you could easily argue that Polkadot is the best Web3 bet of them all.

Polkadot was designed to ensure transactions are kept secure and accurate with only a single main blockchain. By adding other sidechains to the mix, users gain the benefit through its customizability. That further opens up its utility.

Polkadot is designed to let its users perform transactions more privately and efficiently. It can create blockchains that don't disclose user data to the public network or process a more significant number of transactions, which is essential to the concept of Web3.