Why the Future of Cannabis Is Bright

The future of cannabis looks bright in the United States and many parts of the world.

Increasing numbers of people support legalizing cannabis, also called marijuana, as governments are becoming receptive to legalization. And, as a result, the cannabis industry is growing.

But what's the future of cannabis? What should you know about this expanding industry before investing in cannabis?

We at Money Morning analyzed polls, trends, and industry developments to understand the future of marijuana better.

In 1969, Gallup asked Americans for the first time if they supported legalizing marijuana. Just 12% of people said they did.

That number started shifting gradually toward legalization in the 1970s. Then in the 2000s, the share of Americans who favor legalizing cannabis jumped.

A 2019 Gallup poll found that 66% of Americans support marijuana legalization.

When you look at poll numbers, it's easy to see why governments are singing a new tune about cannabis.

What the People Say

That 2019 Gallup poll that found 66% favor legalizing marijuana represents a massive shift from when the surveyor first asked the question in 1969.

And much of that change came between 2005 and 2018. That's when the share of those supporting cannabis legalization jumped 30%.

Who's driving the trend toward legalization? Many people, but especially those in the millennial generation. These are individuals born between 1980 and 2000.

But even a majority of Generation X and baby boomers support legalization. According to Gallup, 63% of Gen X and 61% of baby boomers think marijuana should be legal.

Looking at the issue along political lines, a majority from both major parties, Democratic and Republican, support legalization. Republican support is at 51%, compared with 76% for Democrats. And 68% of independents favor legalization.

Pew Research Center found similar results in its November 2019 poll. According to Pew, 59% of Americans support legalizing marijuana for medical and recreational use.

Sixty-nine percent of people Pew asked between 18 and 29 think marijuana should be legal. That number drops to 48% for those aged 65 or older.

It appears that most people now support legalizing cannabis. And governments are reacting to this shift in opinion.

What Governments Are Doing

Many states have legalized marijuana for recreational or medical use. But cannabis remains illegal at the federal level.

There are signs, though, that the federal government's treatment of marijuana is changing. 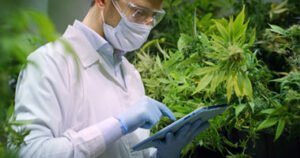 During his administration, U.S. President Barack Obama ordered the Justice Department not to prosecute people for marijuana in states that had legalized marijuana.

His replacement, William Barr, has said that he favors letting states decide how to handle cannabis. And President Trump seems to agree.

It's a position also held by U.S. Democratic Presidential candidate Joe Biden. In other words, whoever's elected president in November 2020 doesn't seem likely to enforce federal marijuana laws in states where it's legal.

Also, in November 2019, the U.S. House Judiciary Committee voted to remove cannabis from the Controlled Substances Act. That law defines marijuana as a Schedule I narcotic, alongside drugs such as heroin and cocaine.

While Congress has yet to take up the committee's action to legalize marijuana, it's a significant step in that direction.

Outside the United States, legalization is expanding. It's legal to use cannabis recreationally in four countries: Canada, South Africa, Uruguay, and Georgia.

It's legal to use marijuana medically in many more countries. Plus, several countries have decriminalized marijuana, including Italy, Spain, Portugal, Mexico, and Brazil.

There's a global movement toward legalizing cannabis. But what does this shift mean for the marijuana industry?

The Future of Cannabis

The cannabis industry is going through rapid change.

Laws and regulations are evolving. New businesses are popping up, and existing companies are getting involved, too.

With all that's happening with marijuana, it can be tough to spot opportunities or future risks.

Where is the marijuana industry headed? We think there are four key trends to look for in the future of cannabis.

As mentioned above, more countries are legalizing marijuana. Right now, only four nations have done so, but that's likely to change.

Mexico may legalize cannabis this year. And an Italian court ruling in December 2019 legalized growing small amounts of recreational marijuana at home, potentially opening that country to greater legalization.

How big could the global marijuana market be? That's a tough question to answer right now.

The United Nations estimates the global cannabis market is worth about $150 billion. But that number includes legal and illegal marijuana use. And it's challenging to know what share of that $150 billion is in countries where cannabis is or may soon be legal.

As we mentioned, 33 U.S. states have legalized medical marijuana use. An additional six have authorized the use of CBD-oil products, such as Texas and Georgia.

And the number of states allowing some form of medical cannabis use is likely to expand if polls are any indication. According to the Pew Research Center, 91% of Americans support medical marijuana use.

As laws open up, the cannabis industry's expansion will continue.

Along with an expanding market, the cannabis industry is also about to enter a maturing phase.

New industries always go through a maturation phase, and cannabis is no different.

Over the past few years, cannabis-based businesses have been popping up in the United States and Canada. These businesses cover a broad spectrum, from larger companies to small retail stores. There are marijuana growers, cannabis product makers, and sellers.

Many cannabis watchers expect greater industry regulation even as cannabis is legalized. Right now, there's little oversight of what information a maker of a CBD-oil product, for example, discloses.

Businesses that can address regulatory concerns quickly and effectively are more likely to succeed as the market matures. Those that aren't may not last.

Currently, regulations vary by state. It costs time and money to navigate laws in each state where you do business, making it hard for cannabis companies operating in many states to make money.

Another issue is many banks and investors consider cannabis too risky for loans and investing. With marijuana still illegal at the federal level, banks worry their loans could be deemed illegal, so they stay away.

Most lenders and investors may not change their attitude until marijuana's legalized nationwide.

As a result, some marijuana businesses will have to cut costs to survive. Not doing so could mean the death of their business.

But that's just part of the growing pains of a totally new industry. The firms that survive and succeed could be positioned for explosive growth once the industry fully matures. That's why so many investors are targeting the cannabis industry right now.

Marijuana's money challenges seep into the medical and research field, too. It's difficult for researchers to secure funding to study cannabis and cannabis-related impacts.

The plant's illegal status keeps most organizations, such as universities, from paying for cannabis research. They consider it too risky.

This stance leaves many researchers unable to secure financing for their work.

But some U.S. organizations are finding a workaround, though, by going outside the country.

Israel is the world leader in cannabis-based research. U.S. News & World Report called the country in 2017 "the Holy Land of Medical Marijuana." An increasing number of organizations are funding cannabis research in Israel.

Other nations with growing marijuana research industries are the Netherlands, Canada, and the Czech Republic.

As for approving cannabis-based products for medical use in the United States, the Food and Drug Administration (FDA) has given the OK to only one product, Epidiolex. It's an oral CBD treatment for people suffering from epilepsy-related seizures.

It's possible the FDA will approve other marijuana-based drugs, eventually. And the agency will likely try to clarify guidelines on cannabis-based products, particularly those using CBD oil.

That will open the floodgates of cash in the medical marijuana industry and is just one more reason investors are trying to get in early. Owning the right marijuana stock before deregulation could lead to outsized gains.

Here's how close we are to seeing these laws changed…

According to the Law

As of January 2020, there were nearly 1,000 pieces of cannabis-related legislation in Congress or state legislatures across the United States.

Each state makes its laws. And the federal government's current stance is to let states regulate themselves when it comes to cannabis.

As more states adopt marijuana-related laws, other states have examples to follow. It makes it easier for more states to pass cannabis legislation.

That means the number of laws and regulations that states and the federal government consider will likely increase before it gets smaller. So, the laws governing marijuana and marijuana-based products will be changing quickly and possibly drastically over the next few years.

Cannabis businesses must monitor and respond to these legislative changes. Those that do are more likely to succeed than those that don't.

Trends for the cannabis industry point to more acceptance of marijuana by individuals and governments.

This shift is creating new opportunities for the industry, though it still faces hurdles.

The regulatory and legislative environment makes it harder for some cannabis-based businesses to operate and turn a profit. And the industry's entering a maturing phase that could feature consolidation or closures.

Still, the marijuana industry is an enticing opportunity for investors because the future of cannabis appears bright.

The information and strategies you'll discover in this guidebook are helping put ordinary folks on the road to riches – faster than EVER before.