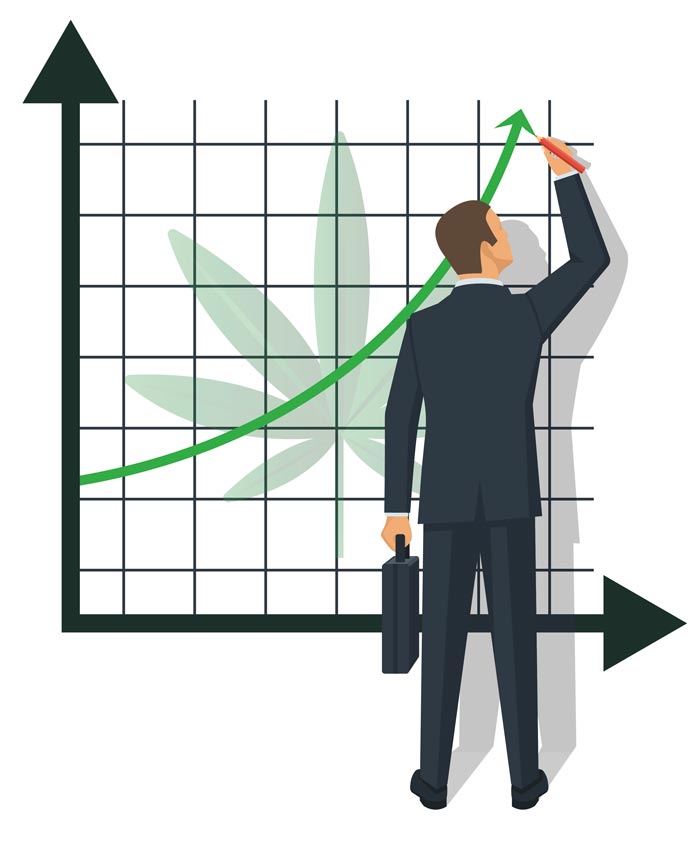 Click to Enlarge
Investing in the best marijuana stocks is the easiest and best way to profit from the explosive cannabis industry. But finding the best cannabis stocks isn't always easy. That's what we're here for.

Over the past few years, many cannabis companies started listing their stocks on major exchanges.

And cannabis is an expanding industry with huge potential – marijuana is legal in Canada. Thirty-three U.S. states allow medical marijuana use, with 40 states legalizing CBD-oil use. Plus, 11 states and the District of Columbia legalized recreational cannabis use.

The opportunity to be an early investor in a young and booming industry is sure to appeal to any savvy investor. Of course, picking the best cannabis stocks is crucial to making money in this sector. Just buying any stock or one with a lot of hype could be a recipe for losing money.

Whether you are new to investing in marijuana or looking to diversify your portfolio, you can benefit from our discussion of six of the hottest cannabis and CBD stocks you can buy.

But first, let's cover the marijuana industry's growth and potential.

There are three sectors of the cannabis industry:

Click to Enlarge
Our list of the best marijuana stocks includes companies operating in all three sectors. This is because the cannabis market is expanding across the board.

CBD, or cannabidiol, is a chemical compound in marijuana. It is non-psychoactive and used in many medical products. THC is the psychoactive part of cannabis sold in forms ranging from dried leaves to baked goods.

An increasing number of companies are entering the cannabis industry as more countries and states legalize its use.

Marijuana is a growing industry with ever-changing laws and regulations. As such, it is important to stay aware of which companies are operating responsibly and adhering to regulatory changes.

Opportunity abounds for shrewd investors to turn a profit when investing in cannabis. For example, the U.S. Marijuana Index measures cannabis stocks in at least 30 companies operating in the United States. The Index ranged between $22.37 and $134.41 from January 2015 to May 2020.

Closely studying the industry and its trends to wisely invest in top cannabis stocks could boost your investment portfolio.

Aphria Inc. is a Leamington, Ontario–based company that produces and sells cannabis for medical and recreational use.

The company owns some of the best-known brands in the industry, including RIFF and Solei.

But profitability is the biggest reason Aphria is one of the best cannabis stocks. With its Q3 2020 financial results, Aphria posted positive operating earnings for four consecutive quarters. And the company's revenue keeps growing.

In a nascent industry such as cannabis, profitable companies aren't easy to find. But Aphria Inc. is one of them, earning it a spot on this best marijuana stocks list.

Founded in 2013, Canopy Growth has the most sales of any cannabis company in the world.

And it's still growing.

Canopy Growth owns one of the industry's most-recognizable recreational marijuana brands: Tweed. And the company is adding more production capacity to keep up with demand.

Impressed by its returns and expansion plans, Bank of America analysts give Canopy Growth a "buy" rating, making it one of the top cannabis stocks to consider.

The Cronos Group is a global company based in Toronto.

The firm invests in medical marijuana producers, such as Peace Naturals and Whistler Medical Marijuana Co. Its diversification in the field makes Cronos one of the best marijuana stocks to consider buying.

And while Cronos isn't yet profitable, its operating loss is dropping. The amount of money it lost in Q1 2020 was $8 million lower than the previous year.

So far, most of Cronos' growth has come from Canadian customers. But the company is expanding into the United States. Cronos announced in August 2019 that it's acquiring four Redwood Holding Group subsidiaries that produce CBD-infused cosmetic products.

Impressive growth and push into the United States make The Cronos Group one of the top CBD stocks to buy.

Green Thumb Industries is a recreational and medical marijuana producer and distributor based in Chicago.

Green Thumb opened two stores in Illinois during Q1 2020, bringing its total in that state to seven. It added a new shop in Pennsylvania, where it now has 10 storefronts. Plus, the company has licenses to open another 52 stores.

The benefits of this expansion show up in Green Thumb's financial results.

These results and its continued growth make Green Thumb one of the best cannabis stocks worth considering.

To date, only one cannabis-based treatment has received the U.S. Food and Drug Administration's (FDA) approval for use in the United States.

That drug is Epidiolex, made by GW Pharmaceuticals. Doctors use Epidiolex to treat seizures in some epilepsy patients. Epidiolex is made from CBD, the non-psychoactive compound found in cannabis. That makes GW one of the best CBD stocks to buy.

In its Q1 2020 results, GW Pharmaceuticals announced Epidiolex generated $116.1 million in revenue. Nearly all that amount, $106.1 million, came from within the United States.

But that's where it gets interesting.

Bank of America analyst Tazeen Ahmad expects the company to receive approval for Epidiolex in many other countries, including Germany, the United Kingdom, and France. And Ahmad said the FDA could approve Epidiolex for treating another ailment, tuberous sclerosis complex.

GW Pharmaceuticals' financials already impress. It brought in $120.6 million in first-quarter 2020 revenue, up from $39.2 million the year prior.

GW Pharmaceuticals should see more significant growth if more countries approve Epidiolex, and if the FDA greenlights more uses for the drug.

Trulieve Cannabis is a holding company that owns subsidiaries that produce and sell medical marijuana.

As of June 26, 2020, Trulieve subsidiaries operate 53 stores in the United States. Nearly all of those, 51, are in Florida. Trulieve also owns a shop in California and Connecticut, with plans to expand into Massachusetts.

Trulieve's first quarter 2020 results are impressive. The company hauled in $96.1 million in revenue, its highest quarterly amount yet. That's a 21% increase from Q4 2019.

And Trulieve has the capital to fund its growth, which isn't always the case with cannabis companies. Trulieve ended Q1 2020 with $100.8 million in cash on hand.

We've discussed some of the best marijuana stocks to buy; now let's talk about the best cannabis ETFs.

There are now many marijuana ETFs (exchange-traded funds) in which you can invest.

Cannabis ETFs can be wise investments because they diversify your risk. You can benefit from the marijuana industry's growth without putting all your investment dollars in one or two companies.

At the same time, your returns might be less than if you invest in one company with a high-performing stock.

Still, marijuana ETFs can be a smart way to invest in the cannabis industry.

Specifically, we think you have two options when considering the best marijuana ETFs. 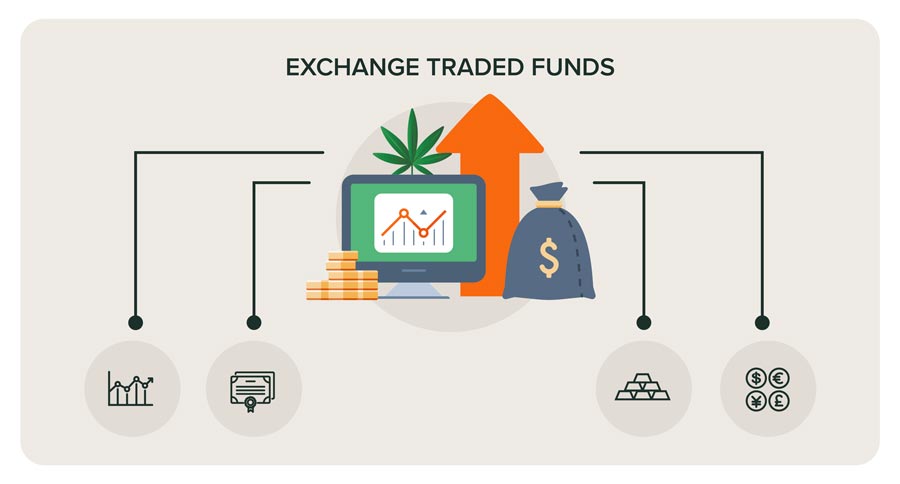 The Alternative Harvest ETF is the largest marijuana ETF. It manages at least $743 million in assets spread across 36 stocks.

Alternative Harvest ETF includes cannabis producers, distributors, and more. It covers companies in all three sectors of the marijuana industry.

And the ETF's three most substantial holdings are on our list of the best cannabis stocks: Canopy Growth, The Cronos Group, and GW Pharmaceuticals. These companies combined make up 27% of the Alternative Harvest ETF portfolio.

Even better, the ETF has one of the highest dividend yields, 7.25% of any marijuana ETF.

With only about $21 in assets under management, the Cannabis ETF is smaller than the Alternative Harvest ETF.

But two things make the Cannabis ETF one of the best marijuana ETFs. It has a good dividend yield (4.1%), and the fund's top four holdings are on our best cannabis stocks list: Aphria Inc., Canopy Growth Corp., The Cronos Group, and GW Pharmaceuticals.

Most of Cannabis ETF's investments are in the U.S. medical marijuana space, a rapidly expanding market. The fund does own shares in some Canadian companies as well.

We think Cannabis ETF is well-invested with a strong dividend yield. We see the fund as one of the best marijuana ETFs in which to invest.

Investing in the Best Cannabis Stocks

Laws, regulations, and people's mindsets are changing. More places are legalizing marijuana for recreational and medical use.

And companies are rushing to meet demand.

Investing in the best cannabis stocks can set your portfolio up for strong returns as this evolving industry continues expanding.

If you'd like to learn more about investing in marijuana, start at the beginning of our comprehensive guide. You'll get the knowledge and info you need to invest in the cannabis industry. And we walk you through choosing cannabis stocks and choosing CBD stocks.