The history of cannabis goes back a lot farther than you may think. Cannabis played a part in the development of the earliest civilizations and the founding of the United States.

For at least 4,000 years, humans have used cannabis in a number of ways. We've used the plant, called cannabis sativa, medicinally, as a textile, and for pleasure. 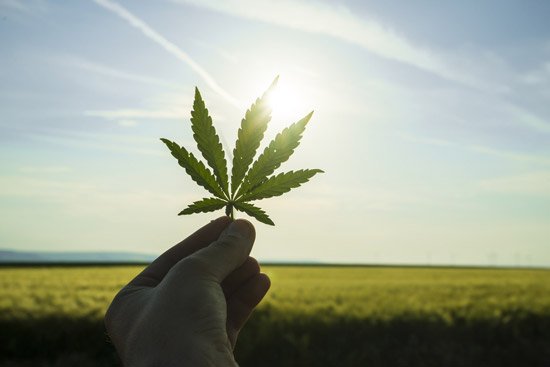 That history and variety of usage is what makes cannabis one of the hottest investment opportunities right now, especially as laws are changing.

If you're considering investing in the cannabis industry, you'll want to learn about the history of cannabis.

The History of Cannabis 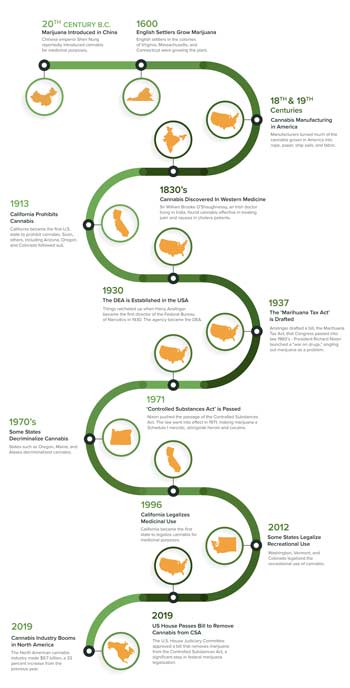 To find the first known uses of cannabis, you have to go back to the 20th century B.C. That's when Chinese emperor Shen Nung reportedly introduced cannabis for medicinal purposes.

People throughout Asia were using cannabis by 500 B.C. medically and recreationally. Even the ancient Greeks and Romans enjoyed the plant.

Civilizations used cannabis to treat many medical issues, including nausea, gout, depression, and malaria. And some cultures relied on cannabis's psychoactive properties to heighten religious ceremonies.

In the 15th century, Spanish explorers brought cannabis to the New World. By the 1600s, English settlers in the colonies of Virginia, Massachusetts, and Connecticut were growing the plant.

Among the colonists cultivating cannabis was George Washington, who grew cannabis on his Virginia farm. Manufacturers turned much of the cannabis grown in America in the 18th and 19th centuries into rope, paper, ship sails, and fabric.

The plant's medicinal uses continue to expand. Physicians use cannabis to help people suffering everything from epilepsy to cancer.

And there are many health-related products on the market that use CBD, a chemical compound found in cannabis. People rely on CBD to help them cope with stress, inflammation, depression, and more.

Throughout history, people referred to cannabis sativa as cannabis. But that started changing in the United States in the early 20th century.

The History of Marijuana

The Mexican revolution of 1910 caused many Mexican citizens to seek refuge in the United States.

The influx of Mexican immigrants upset some in the U.S. As anti-Mexican attitudes increased, some Americans focused on a plant some of the refugees liked to smoke: cannabis.

Cannabis wasn't new to the United States, but smoking it was novel to most people. Up to that point, cannabis was mostly used in the U.S. to make things, such as fiber and paper. The number of Americans who used cannabis recreationally, as the Mexican immigrants did, was small.

Those in the United States who took issue with the refugees fixated on their practice of smoking cannabis. These people started referring to the plant not as cannabis, but as the Mexican-Spanish word marijuana.

Law enforcement officers in Texas claimed that marijuana caused its users to commit violent crimes. And people gossiped that Mexicans were passing the drug to school kids.

Then the government started taking action.

In 1913, California became the first U.S. state to prohibit cannabis. Soon, others, including Arizona, Oregon, and Colorado followed suit.

Things ratcheted up when Harry Anslinger became the first director of the Federal Bureau of Narcotics in 1930. The agency's now called the Drug Enforcement Administration, or DEA.

Anslinger fueled the racism behind the push to ban marijuana. In arguing for the illegalization of cannabis, Anslinger said, "There are 100,000 total marijuana smokers in the U.S., and most are Negroes, Hispanics, Filipinos, and entertainers. Their Satanic music, jazz, and swing results from marijuana use. This marijuana causes white women to seek sexual relations with Negroes, entertainers, and others."

Anslinger drafted a bill, the Marihuana Tax Act, that Congress passed into law in 1937. For the first time in the history of cannabis in the United States, it was illegal to sell marijuana.

Things changed for a short while during World War II. Needing help with the war effort, the U.S. government encouraged farmers to grow hemp. Hemp's a variation of cannabis sativa used for industrial purposes.

Once the war ended, the government no longer supported hemp farming. Most farmers moved away from the practice.

And the stigma about marijuana never went away.

In the 1960s, U.S. President Richard Nixon launched a "war on drugs," singling out marijuana as a problem.

It was a popular position to take. A 1969 Gallup poll found that only 12% of Americans favored federal marijuana legalization.

Nixon pushed the passage of the Controlled Substances Act. The law went into effect in 1971, making marijuana a Schedule I narcotic, alongside heroin and cocaine.

Marijuana remains a Schedule I drug. But efforts toward cannabis legalization started in the 1970s and have accelerated ever since.

In the 1970s, states such as Oregon, Maine, and Alaska decriminalized cannabis.

In 1996, California became the first state to legalize cannabis for medicinal purposes. The medical use of marijuana is now legal in 33 states.

Washington, Vermont, and Colorado legalized the recreational use of cannabis in 2012. So far, eight states and the District of Columbia have followed their lead.

Federal marijuana legalization has not yet happened, but there are signs it may not be far off. In 2013, President Barack Obama ordered the Justice Department to stop enforcing marijuana prosecutions in states where cannabis use was legal.

While Attorney General Jeff Sessions, under U.S. President Donald Trump, rescinded that order in 2018, Sessions is no longer Attorney General. It's currently unclear what the Justice Department's stance is toward marijuana.

But both Trump and 2020 Democratic Presidential candidate Joe Biden favor allowing states to decide whether cannabis should be legal within their borders. Plus, the federal prohibition could be ending soon.

A 2019 Gallup poll showed that 66% of people favor legalizing cannabis. That's a significant shift in a short amount of time. The share of Americans who support legalization grew 30% between 2005 and 2018. 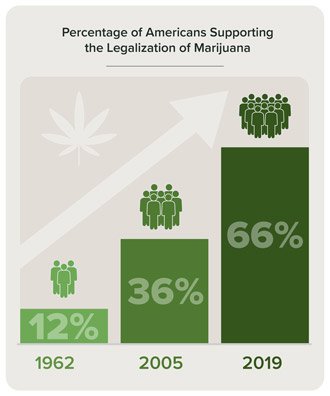 Outside the United States, the recreational use of cannabis is legal in Canada, South Africa, the country of Georgia, and Uruguay. Many other countries decriminalized marijuana, as well as approve of using it medically.

Growing support for cannabis legalization in the United States and elsewhere is creating opportunities for businesses looking to capitalize on the many uses of cannabis.

And there are a lot of opportunities here…

Throughout the history of cannabis, cannabis sativa has served medicinal, industrial, and recreational purposes.

The recreational, or psychoactive, uses of cannabis come from the plant's chemical compound THC. THC can cause cannabis users to feel "high."

Turning cannabis into something people can enjoy recreationally requires drying the leaves. Then marijuana can be smoked or used to make other products, including those you can eat.

Examples of such edible marijuana products include cookies, brownies, and gummy candies. Some producers are now infusing cannabis into drinks.

On the industrial side is cannabis sativa L, a plant with fibers used to make fabrics and other materials. Following the post-World War II decline, hemp farming in the United States is now increasing.

Congress legalized hemp in the 2018 Farm Bill, which made it legal again to grow the plant. China's currently the world leader in hemp production, followed by Canada and then the United States.

Some of cannabis's medical uses comes from its chemical compound CBD. CBD can treat everything from nausea to depression. Doctors use it to help patients suffering from many ailments, including cancer, HIV/AIDs, glaucoma, multiple sclerosis, and more.

Thirty-three states have legalized the medical use of marijuana. And in 2018, the U.S. Food and Drug Administration (FDA) approved a drug derived from cannabis for the first time.

The medicine, Epidiolex, is made by G.W. Pharmaceuticals. It treats seizures in patients with two rare forms of epilepsy.

To date, the FDA's approved three synthetic cannabis drugs for use: Cesamet, Marinol, Syndros. Many experts believe more FDA-approved cannabis-based medicines are on the way.

Cannabis has many uses, and it's increasingly legal to apply them. That's creating opportunities for businesses.

Making a Profit Off of Cannabis

In 2019, the North American cannabis industry made $9.7 billion, a 33% increase from the previous year.

And some believe the global cannabis industry could grow to $32 billion by 2022.

How are businesses making money off of cannabis? There's potential in both the medical and consumer markets for marijuana-based products.

Edibles, in particular, boast a lot of promise for the industry. A 2018 Deloitte study found that 58% of people plan to buy an edible cannabis product.

Beverages are another expanding cannabis category.

On the health side are CBD-based products. There's the before-mentioned Epidiolex. But G.W. Pharmaceuticals and other companies, such as Cara Therapeutics, are developing more CBD-based drug treatments.

And other businesses, including CV Sciences and Gaia Herbs, are making health-related products based on CBD oil. These items include drops, creams, capsules, and gummy candies.

Cannabis as a Business

Are companies making money off of cannabis? In short, yes, they are.

But the cannabis industry is evolving rapidly and is subject to significant amounts of regulation. This regulation means companies must be agile and strategic in their approaches.

Even with this volatility, cannabis offers a significant upside. Many industry experts expect federal marijuana legalization will happen sooner rather than later.

A majority of current Americans think marijuana should be legal. But that number grows when looking at who will one day be in charge of Congress.

A 2018 Gallup poll found that at least 80% of Americans under 40 support cannabis legalization.