Apple's latest release, the iPhone 8, is a complete failure and could spell disaster for investors... at least, that's what the talking heads on the financial news networks want you to believe. One of the pundits even said that the short-term prognosis "doesn't look good" for the stock.

Now it's true that Apple's latest release isn't selling as well as it predecessor, the iPhone 7. In fact, the demand for the iPhone 8 was so low that you could still buy phones days after pre-sales started. To give you an idea of just how bad that is, the iPhone 7 sold out minutes after pre-order selling began - setting an all-time record for Apple.

But that doesn't mean the company - or the stock - is in trouble. Quite the opposite, actually.

And the media's "doomsday" prediction is now putting you at risk to miss out on the next triple-digit profit opportunity...

He also said that, based on these three factors, he believes Apple's fourth-quarter earnings will drive the stock price to $187.

Now, that price target is a bit higher than my assessment... As you may recall, I showed you back in April why I believe AAPL could go as high as $180 by Dec. 31. And when you look at the overall price pattern, it's easy to see why the media's overhyping the iPhone 8's poor sales numbers: 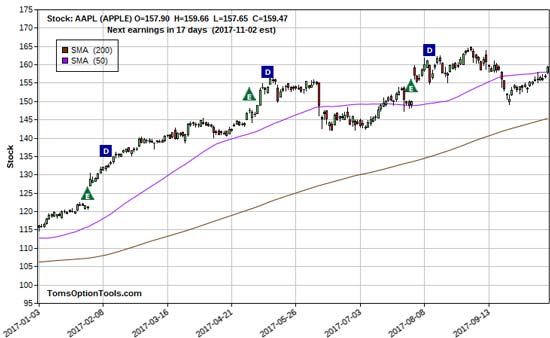 The chart above shows that the markets liked the news of an upgrade for AAPL, as it was back to trading above its 50-day simple moving average (SMA). Now I want to see it hold above that moving average for a day or two before getting even more conviction for a higher share price to come from a technical perspective.

But, as you can clearly see from the price pattern above, AAPL is trending higher overall - far from the doomsday outlook the media pundits have been throwing around on TV.

I also mentioned back in April that you could consider opening a LEAPs trade to profit on the stock, using the Jan. 19, 2018, $140 call option. Back then, the mid-price for this trade idea was $11.10. Here's what it's now priced at (this quote will likely change, depending on the time you read this):

In fact, a small group of my readers have had the chance to score 233.40% total gains on AAPL this year. To find out how you can "get in" on the next triple-digit winner, click here.