Access Your Profit Alerts
Sign Up for Money Morning and get your free report:
"The Best Stocks to Buy Now"
How to Buy Bitcoin
Twitter
Stocks: RATE

During the zero-interest-rate years, the markets tended to react to any positive news in the economy by heading down in a “good news is bad news” syndrome. Traders and investors only managed to shake this over the last year.

Events have shown that the markets are moving on economic optimism now and can therefore handle interest rate normalization. What’s more, the Fed has been pretty transparent about its plans to hike rates in the face of stronger economic and employment data and rising inflation, so last week’s rate hike was largely priced in.

…unless you happen to be invested in one $570 billion sector. It might not survive the next Fed move toward normalization – a move I’m certain is coming this year.

In fact, this industry could be another 0.25% rate hike away from exploding altogether…

This Is the Next "Subprime Bubble"

Whether it’s for status, safety, or reliability, people are always looking for newer and better cars to drive.

But most people typically don’t walk into a dealership and put down a stack of cash for their vehicle of choice – so they finance their cars.

The problem is, not everyone can get approval for the amount they need (if at all)… This is where subprime auto loans come into play.

A subprime auto loan is used to approve people with less-than-perfect credit scores or a limited credit history who need to buy a car. This type of loan typically carries much higher interest rates and may also include pre-payment penalties.

Of course, given these higher rates, subprime auto loans are among the most sensitive to interest rate changes.

Now one could argue that subprime auto loans helped propel auto sales in the United States, but it didn’t come without risk – and that risk is growing by the day… 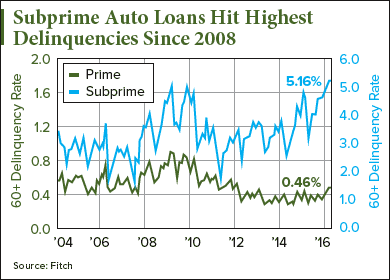 Back in February 2016, one of the “Big Three” credit bureaus, Experian, reported that auto loan delinquencies had hit a six-month high. Of those loans, nearly 5% of subprime loans were delinquent by 60 days or more – the highest level since 2008 at that time.

Financial professionals worried about the potential of those bad loans being packaged up and sold as securities… Just like the subprime mortgage-backed securities that led directly to the Financial Crisis.

If that repackaging did happen, and there’s a very real risk it will, the entire auto industry faces the risk of collapsing.