The Wall Street–captured financial "news" media blasted us with the usual misinformation in the wake of last Friday's nonfarm payrolls report. The big guns of financial infomercialism touted the notion that the reported gain of 155,000 jobs in November "missed" economists' expectations. The consensus guesstimate was for a gain of 198,000.

Here's how a CNBC headline put it: "Job growth falls short of expectations in November: 155,000 payrolls created vs 198,000 estimate."

"Markets have high expectations for a December rate hike, but a slowdown in hiring in November appears to give Fed officials some room to slow down their hiking path next year," the outlet reported.

In the meantime, we can look at the actual data right now, make a few comparisons with years past, draw a few lines, and see reality as it currently exists without waiting five years for the seasonal adjustment process to be completed. Of course, that was the seasonally "adjusted" number, which as often as not bears no resemblance to what actually happened. The seasonally fudged number is subject to two monthly revisions, and five annual revisions thereafter as the statisticians fit the abstraction to reality over the next five years.

So let's do that and see what actually happened in November – and what it tells us about the stock market.

While the media kept everyone focused on the seasonally adjusted gibberish, the actual, unmanipulated data gave us a clear view of November's performance. The total number of jobs rose by 475,000. That's as of Nov. 12, by the way. It's not the full month. We have subsequent real-time tax data showing that the job market has strengthened considerably since then. I'll get to that in a moment.

The Number Didn't Miss – the Economists Did

The problem wasn't that the number "missed." The problem was either that the seasonal adjustment factor was wrong and will be adjusted away in the next few years as new factors are applied retroactively, or it that economists were even more clueless than usual. I heard in one report that not a single economist surveyed had guessed that low. That tells you something.

The fact was the month's actual performance didn't miss anything. It was well above average. All of the hand-wringing and worry about the number being weaker than expected was pure nonsense.

When we graph the actual data, you can see that absolutely nothing has changed. 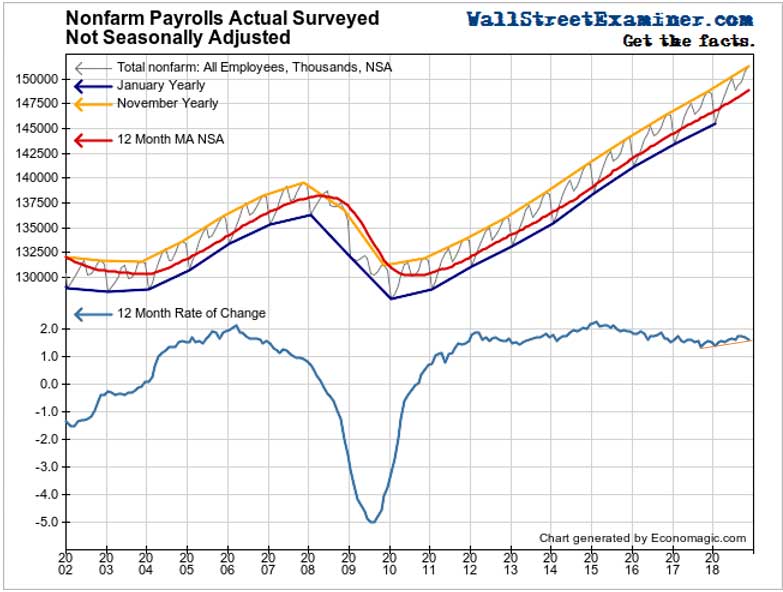 This trend has been running on railroad tracks in virtually a straight line since 2011. It could hardly be more regular. The annual growth rate was 1.65% in November. That was solidly in the middle of the range of the past two years. It was slightly slower than the growth since June, but still in an uptrend.

A weak December could break the trend, but how likely is that? Not very, if the withholding tax collections from late November and early December are any indication. There was a huge surge in withholding from mid-November through the first couple of days in December. It could be an anomaly, but it certainly suggests that at least some component of that gain was due to a hiring surge.

Don't Buy the Hopium; Wage Inflation Is Raging Too