Thanksgiving in the Barton house is all about gratitude. We're thankful for such a wide range of blessings - time with family and friends, delicious food, and yes, even a little football.

But once Thanksgiving is over, aside from a glance or two at a smartphone or laptop, no one even considers venturing out into Black Friday. As one of only two states east of the Mississippi that doesn't have sales tax (New Hampshire is the other), Delaware malls and stores in general get overrun on big shopping days. The Bartons avoid that fray - but thousands of others jump right in...

As do millions more all around the country. Americans spent $4.2 billion at online sales alone on Thanksgiving Day, and another $7.4 billion on Black Friday. That second number alone is up 19.6% from last year's Black Friday.

I certainly can't fault the retailers for putting on those sales. For them, Thanksgiving, Black Friday, and the weekend after can make or break their whole year.

The five days from Thanksgiving Day through Cyber Monday are the highpoint of the holiday shopping months of November and December. And just those two months make up between 20% and 30% of annual sales for American retailers.

So with Cyber Monday now behind us, you'd think the news would tell you which retailers did well, which didn't, and most importantly, what you should do about it.

But the front pages have nothing to help you with your finances. For them it's page five news. You'd have to dig through page after page to even get a whiff of that.

This year, that's even more unfortunate, because this Black Friday was like nothing we'd seen before.

There's been lots of talk lately about the potential for a weakening U.S. economy. It seems someone forgot to tell American consumers, because sales this past weekend broke records once again.

In other words, online retailers had a great holiday.

Or rather, some of them did. But the winners and losers this year were quite surprising.

I've analyzed the early reports and crunched the numbers to bring you what the media doesn't seem too interested in...

Here are the best retail stocks to trade, and which ones to avoid, this December...

For us as traders, one of the key advantages of retail moving online is the increase in data, and how fast we get it.

Even over the weekend, we already had a pretty good picture of what Black Friday looked like for online retailers.

And the numbers are staggering. Take a look at this chart from Edison Trends, which shows the change in total online Thanksgiving and Black Friday sales for America's biggest retailers: 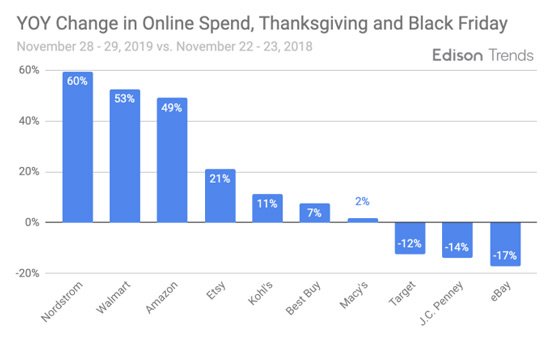 Let's deal with the elephant in the room first: Amazon.com Inc. (NASDAQ: AMZN). Somehow, against all expectations, the online retail giant managed to grow its Thanksgiving and Black Friday sales by almost 50% from last year.

If you're wondering who in the world was buying on Amazon this year that didn't already do it last year, you're not alone. The ability of Amazon to execute so well it's almost hard to believe continues to amaze.

There's a reason the company crushed all but the strongest competitors in the retail industry.

Now, I've been bullish on Amazon for a long time. This data shows that the company continues to execute extremely well, and hasn't lost its edge. Its stock has underperformed in the last two quarters, but I expect it to play catch-up in the coming months.

And as this next chart shows, Amazon's sales didn't increase only because there were more customers. The average person also spent more money on Amazon than last year, although not by as much as at some of its competitors: 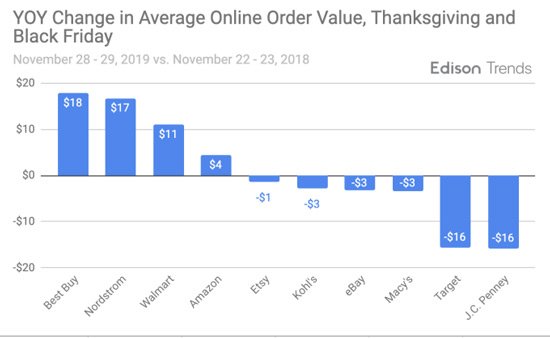 With such a strong showing from an already incredibly successful business, I recommend you buy a new stake in Amazon if you haven't already, or add to your existing holdings going into the end of the year.

And there's another retail behemoth that showed similar results to Amazon...

Walmart Inc. (NYSE: WMT) disclosed total Black Friday sales were up 53% from last year, and the average person spent $11 more than in 2018.

These numbers are astonishingly positive, and show that Walmart's strategy to take on Amazon through a combination of online plus brick and mortar sales is working. Granted, Walmart's online sales started at a much lower level than Amazon's, but the growth is still impressive.

Walmart is playing catch up here, and while it's working, they still have ways to go. Not a bad position to enter before the end of the year either.

As is the next company we'll look at...

A Resilient Retailer That Beat Expectations