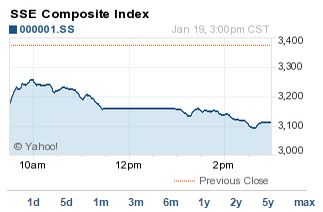 The regulatory move was "a nasty surprise," Hong Hao, a strategist at Bank of Communications, wrote in a note Monday.

The financials sub-index tumbled 9.6%. All 14 banking stocks slumped by their 10% daily limit.

Here's why it happened...

Increased lending helped with the 53% surge in China's stock market last year. The CSRC warned investors in late 2014 not to chase the market rally.

"The government wants to keep the leverage risk of margin financing under control," Caroline Maurer, a fund manager at Henderson Global Investors, told The Wall Street Journal. Following the market's rapid rise over the last three months, "there has been tremendous short-term profit-taking pressure."

The CSRC said on its microblog that it suspended the firms because they let customers delay repaying financing for longer than they were supposed to. No additional details were provided.

China has been quickly bulking up debt ever since the financial crisis of 2008. Local governments have borrowed heavily to fund infrastructure projects. And property developers have used piles of debt to revive their businesses.

However, it's individuals' mountains of debt that sparked concerns. These small investors fuel markets higher. They have the most to lose when the stock market reverses and they are caught overleveraged.